The Smartest Robot Pet Yet

Loaded up with sensors and motors, this robo-dino is so lifelike, you just might consider replacing your cat 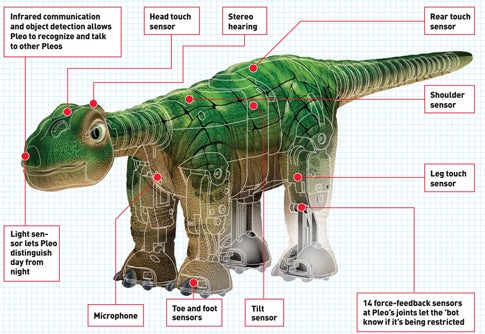 Refer to “Pleo” as a robotic pet, and its co-inventor, Caleb Chung (of Furby fame), will quickly set you straight: Pleo is a designer life-form. That’s because, on the outside, everything about the one-week-old Camarasaurus is very unrobotic. Its movements are fluid, not rigid; its actions are seemingly spontaneous and unprogrammed; and its skin is smooth, seamless and stretchy. Inside, however, the 3.3-pound Pleo is very robotic indeed.

It’s stuffed with 38 sensors to detect light, motion, touch and sound. They feed information about Pleo’s environment to one of eight processors that can handle a collective 60 million calculations per second. A complex computer program determines what the dino does next-howl over the edge of a table, sneeze, crane its neck around 180 degrees to see who´s scratching its back, or any of thousands of other possibilities. As Pleo´s manufacturer, Ugobe in Emeryville, California, develops more sophisticated personality coding, you´ll be able to upgrade the robot through its SD-card slot or from the Web through its USB port. Pleo´s Jurassic competition, the WowWee Roboreptile, successor to the popular Robosapien, also hits shelves this fall.