Scientists invent the Cyberhand, a brain-controlled robotoic hand with fingers that can actually feel 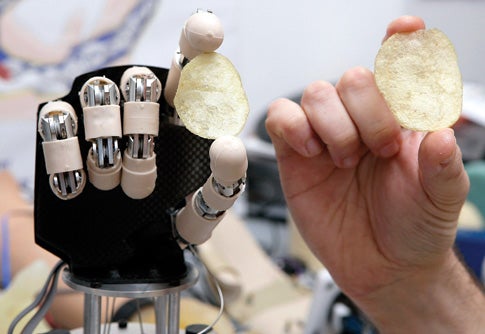 A model of Cyberhand and a human hand hold a potato crisp in the ArtsLab laboratory of the Polo Sant’Anna Valdera institute in the central Italian town of Pontedera, Italy, Wednesday Oct. 26, 2005. For now, it is a computer that orders “Cyberhand” to move in the high-tech institute where researchers last month finished the first phase of its development: a 3 1/2 year project to create the first prosthetic hand capable of imitating natural sensory signals. (AP Photo/Fabio Muzzi)

Last October we reported on the first mind-controlled bionic limb, a multimillion-dollar prosthetic arm built by scientists at the Rehabilitation Institute of Chicago [â€A Toast to the Bionic Manâ€]. Now a team of European scientists led by Paolo Dario, a professor of biomedical robotics at the Scuola Superiore Sant´Anna in Pisa, Italy, has unveiled the first brain-controlled prosthetic hand. The metal-clad prototype, dubbed the Cyberhand, combines unprecedented mechanical dexterity with a sophisticated computer system designed to harness brain signals from the wearer, allowing him to move and feel the hand as though it were his own.

Dario and his team expect to begin testing the Cyberhand on patients this year, during which time they aim to perfect its sensory interface. Consisting of a microprocessor, electrodes and a telemetry system implanted in the wearer´s lower arm, the interface will act as a sort of man-machine interpreter, translating and ferrying electrical signals back and forth between the hand and the patient´s central nervous system. To do this, the team has invented electrodes that record electrical data from nerve cells and stimulate the cells to provide the wearer with sensory feedback. Current systems do just half the job, recording electrical signals without sending any data back to the brain.

In addition to its ability to communicate with the body, the Cyberhand features a number of mechanical advances, including five independently moving fingers. A DC motor in each digit gives the robotic hand 16 degrees of freedom, so it can move in a variety of subtle directions (the human hand has 22 degrees of freedom). Each motor pulls a Teflon-sheathed cable that mimics actual tendons and muscle in the fingers, enabling them to curl around a coffee mug, for instance. With pressure sensors embedded along the surface of the fingers, the hand can pick up even delicate objects without crushing them.

Although the primary goal of the Cyberhand is to make patients feel as if they have their limb back-that is, to design a fully functional hand that moves in perfect sync with the wearer-engineers are also paying close attention to aesthetics. â€When we hear from patients, they say they´re almost ashamed of using the kind of pincher mechanisms that are on the market,â€ says Lucia Beccai, the project´s manager. For that reason, the entire mechanism will be encased in a silicone cosmetic glove made to look like a real human hand, down to the fingernails. The hope is that it will â€look and feel more natural for the patient, so it will feel less like an external part of the body,â€ Beccai says.

Obviously, the technology is not quite at the stage where a Luke Skywalker type can get his hand lopped off and simply head down to the droid department for a flawless replacement. Beccai expects that it will be another five to eight years before the Cyberhand even goes on sale, but she´s confident that the Star Wars era is on the horizon. â€This is truly a great moment for enhanced prostheses,â€ she says. â€With smaller motors and new sensors, big change is going to happen in a relatively short time.â€