The best-selling Robosapien toy robots are made to be hacked, so we asked the guy who wrote the book on modding them to create a flame-throwing Robozilla 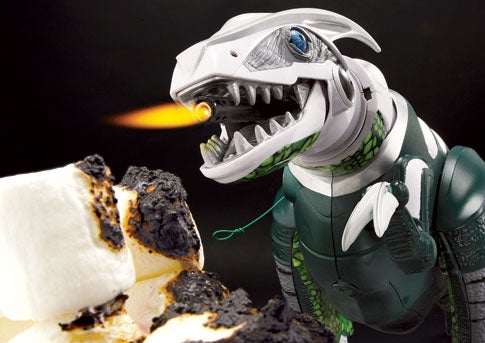 Let’s face it–until they’re cooking us breakfast and doing our laundry, the most fun you can have with store-bought robots is the fun you make yourself. Sure, robots like WowWee’s Roboraptor (and its companions, Robopet and Robosapien) are surprisingly capable for $60-to-$200 toys, with wide ranges of motion, touch sensors and powerful software. But it’s those same out-of-the-box skills that make the ‘bots such prime fodder for hackers. Within weeks of the Robosapien’s introduction in February 2004, tinkerers flooded the Web with new tricks: programmed dance routines, crazy voices, infrared vision. Some companies threaten legal action against such amateur upgrades ([cough] Sony [cough]), but not WowWee. Its designer, Mark Tilden, intentionally gave his ‘bots tinkerer-friendly features such as easy accessibility (each comes apart with a single Philips screwdriver), a painstakingly labeled circuit board so you can see exactly what each bit does, and a cavernous crust
of exoplastic that can accommodate additions like an extra micro-processor brain, an MP3 player or a butane flamethrower. Say, there´s an idea…