Buyer beware: The Inspire 4G was never a 4G phone for me 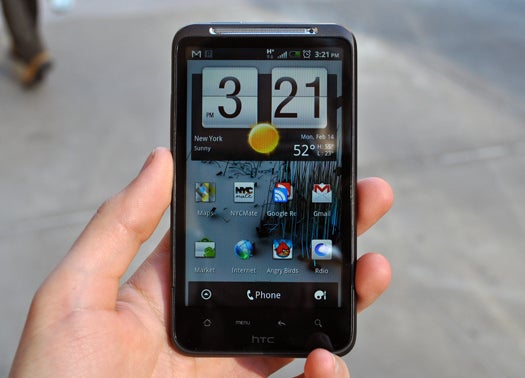 The HTC Inspire 4G is part of a new effort on AT&T’s part to pad out their lineup with some top-flight smartphones, a smart move now that the iPhone is no longer exclusively theirs. What’s especially notable about the Inspire is that it’s AT&T’s first “4G” phone, running on an HSPA+ network that AT&T promises will deliver super-fast speeds–but what AT&T isn’t rushing to tell you is that you probably won’t see those speeds yet, even with a 4G phone like the Inspire. All over AT&T’s website is an asterisk after mentions of 4G, leading to a note saying that 4G is “available in limited areas.” Take that seriously, folks. No one knows where those “limited areas” actually are, and if AT&T does, it’s not telling.

The Inspire 4G is the first “4G” phone on AT&T, though that largely depends on your definition of 4G. To be specific, it’s AT&T’s first HSPA+ phone, essentially using a new beefed-up 3G network that’s capable of speeds many times faster than typical 3G. It’s not nearly as fast as LTE, a next-generation 4G protocol used by Verizon, and, by around 2013, by AT&T as well. But until then, HSPA+ will be the fastest speeds you can get on AT&T.

Though there’s nothing really new about the hardware of this phone (save the HSPA+ antenna), that’s not to say there’s anything particularly wrong with the Inspire. The hardware is very nice in the hand: Thin but not crazy thin, solid and metallic without being too heavy, and generally (save the buttons–see below) well-designed, if a little dull. (It’s black glass on black matte metal with silver buttons, hard to play it any more safe than that.) The screen, at 4.3 inches, is massive–this is not a phone for the petite of hand–and despite its relatively low resolution, it’s great for typing, reading books (the Kindle app doesn’t feel ridiculous on a phone this size), and watching videos. At 800 x 480 pixels, it actually has a lower resolution than screens much smaller than it, even the now-ancient (autumn 2009? We were so innocent then) Motorola Droid. But it’s not hard to use, or even noticeably deficient unless you have an iPhone 4 or Samsung Galaxy S phone right next to it.

The phone’s 1GHz Snapdragon processor may not be cutting edge anymore, but it’s still an agile performer, letting you smoothly navigate through Android’s homepages and apps. The camera deserves particular praise–it’s an excellent 8MP shooter, extremely fast and responsive, and takes surprisingly excellent photos (with some great filters, to boot). It’s good enough to let you leave your point-and-shoot at home, which is about as high a compliment as you can pay to a smartphone camera these days. HTC’s Sense UI, a custom interface laid over the top of Android, is as slick as ever, with a few new widgets and flashy features just for the Inspire. 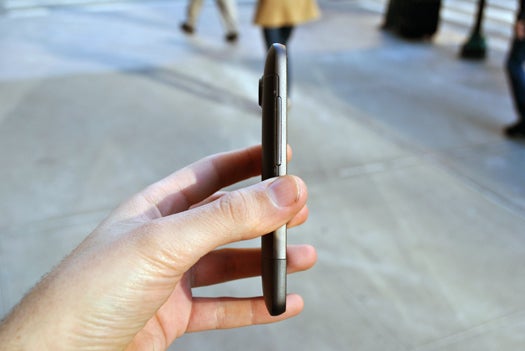 THESE BUTTONS ARE INFURIATING

AT&T has perhaps the most confusing 4G strategy of all four major U.S. networks–Sprint is well-established with Wi-Max, T-Mobile has had its own, faster brand of HSPA+ for months, and Verizon’s legitimate 4G network, LTE, is days away from a huge launch. AT&T, on the other hand, is rolling out their next-gen network in two stages. The first, HSPA+, is actually a beefed-up 3G network, meant to hold over customers until AT&T embraces its own LTE network in 2013. Theoretically, this HSPA+ network could be very quick–in AT&T’s case, up to 14.4 Mbps–but our real-world tests showed that the Inspire was capable of nothing approaching those speeds. In fact, in our tests, not only was the Inspire 4G not noticeably faster than the 3G-using iPhone 4, it was actually a bit slower on average. This is due, an AT&T rep tells me, to the fact that AT&T has not actually rolled out HSPA+ here in New York. What the company calls “backhaul”–basically, hooking up the HSPA+-capable cell towers to more bandwidth–isn’t finished.

This is a pretty misleading rollout from AT&T. Yes, there are warnings all over AT&T’s site, saying availability is limited and an ongoing process, but the coverage map (which customers are likely to consult) shows HSPA+ blanketed over the Northeast Corridor. That’s true in a technical sense, being that this entire area has been upgraded to allow phones with HSPA+ connections to use the network, but until they’re hooked up to increased bandwidth, speeds will stay the same. People assume that having that HSPA+ connection is going to mean higher speeds, an assumption not at all dissuaded by AT&T’s decision to brand these phones “4G.” An AT&T rep told me that when you see the H+ icon on your phone (as I always did), it means “your data sessions will automatically be optimized to perform at the fastest speeds available within [your] area.” But that does not necessarily mean (and in my testing, it never meant) that you’ll be getting anything other than the normal 3G speeds.

AT&T wouldn’t tell me exactly which areas have faster HSPA+ coverage now, though I get the sense it’s tower-by-tower and can’t be generalized by, say, an entire city–AT&T told me “not every cellsite has the enhanced backhaul.” They also wouldn’t tell me when enhanced coverage will come to New York (I’m using New York as just one point of reference here), only that “By year-end 2011, we expect nearly 2/3 of our mobile broadband traffic to be carried over enhanced backhaul,” which doesn’t really tell us anything.

We’d recommend testing out any 4G phone before purchasing it, because there’s no other way to know if your area actually has 4G speeds–neither AT&T’s map nor the HSPA+ icon are valid indicators of faster speeds. And, frankly, this is unusual amongst the carriers: Sprint, the first 4G purveyor, was very up-front about the locations that supported 4G, and Verizon waited until nearly the whole country was blanketed before releasing a single 4G phone. Buyer beware, basically: The Inspire 4G was never a 4G phone for me.

Our tests, then, which were supposed to show the wonders of 4G, are essentially meaningless. We used the SpeedTest.net app on an Inspire 4G and an iPhone 4, tested several times in each of two locations (our office in Midtown Manhattan, and my apartment in north-central Brooklyn). In a browser test, we used the default browser, cleared the cache, and loaded PopSci.com. But you’re not going to get any particular insight from the results–since the Inspire 4G was actually just getting 3G speeds, this is basically a 3G-vs.-3G test.

Those speeds are reasonably quick for 3G, but it’s pretty clear that the Inspire 4G is not receiving any kind of speed boost. 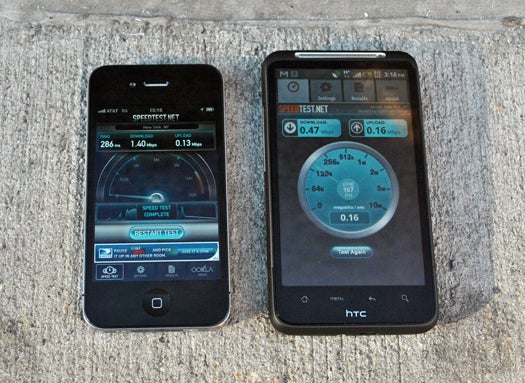 One of the more extreme differences in speed, during our Manhattan test. The average speeds were fairly similar.

Also: The hardware buttons are curiously badly-designed, given the polish of the rest of the device. The volume buttons are just about flush with the side of the phone and are extremely hard to press, with very little feedback. The power/lock button is on the left side of the top edge of the Inspire, but there’s a slight angle on that top edge, so the button is actually tilted just a bit forward. It is exceedingly awkward to press, requiring either a shift of the hand or a stretch worthy of a yoga class. A few times, the phone locked to landscape orientation, refusing to return to portrait until it was restarted–definitely an annoyance, but not a dealbreaker.

The big selling point of the Inspire, beyond that dubious “4G,” is its price: at only $100 with a two-year contract, it’s certainly priced competitively.

The Inspire 4G is all about the 4G: it’s basically the same phone we’ve seen for years (with minor changes to memory and camera, it’s A.K.A. the HD2, HD7, and Evo 4G), so there’s not all that much to say about the phone itself. It’s good. It’s big, it’s pretty fast, it’s fairly well-designed, and it’s mostly a pleasure to use. But it’s important because it’s AT&T’s first 4G phone, and that makes reviewing it a problem, because I never saw 4G speeds. I’m not the only one, either: Other reviewers have noted that AT&T’s “4G” speeds are indistinguishable from 3G, and it’s because they are 3G.

That colors my opinion of the phone, and adds to my reluctance to recommend it. I liked the Inspire, but the fact that AT&T has not expanded faster speeds to such backwoods areas as Midtown Manhattan, and then refused to supply a map of areas where I might actually see faster speeds, has a souring effect. I know there’s a race to get something that could conceivably be called “4G” into the market, but it’s pretty underhanded to release a phone with 4G in the name when that 4G network is nowhere near ready. Our verdict? If you want a big HTC Android phone on AT&T, the Inspire is your best choice. If you want 4G speeds, well, either switch networks or wait for AT&T to get their act together.