After running from Sprint, the Grouse predicts the constant battle for decent cellphone service might finally start favoring the consumer 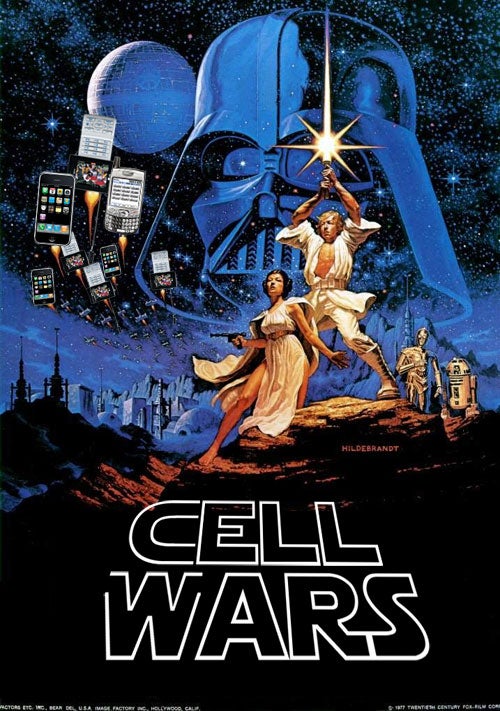 To spend our precious time here together moaning about how royally screwed up our cellphone companies are here in the States would at this point be too easy. You know the drill: Half-assed handsets, crippled functionality, spotty signals, dumbfounding user interfaces, outrageously priced call plans, incomprehensible outsourced customer service reps from a far-off land, and let’s not even talk about the indentured servitude contracts. No, the topic is cliché at this point, so today I’d like to take a positive spin on things. I want to tell you that there’s a silver lining to that foreboding cloud. That things are gonna be alright.

Okay, well I’ll get to that in a bit, but let me bitch about cellphone companies for a little first.

Cellphones continue to edge ever-closer to becoming the Holy Grail of convergence devices–the Tricorders we dream of and deserve, capable of handling our media, messaging, light computing, GPS, personal data, and Web access, in addition to telephony, all with aplomb. But there’s always a wrench in the works, if not a whole tool bag full.

But to be fair, in a relatively short period of time—20 years—we’ve gone from the Wall Street-style brick that cost thousands, only made telephone calls and costs hundreds per month to use, to phones the size of a pack of playing cards with functionality that in many cases rivals a laptop. No matter how good the tech gets, though, it still seems we’re treading familiar and unsatisfying waters. One step forwards, two steps back.

In my case, I hit the wall last fall, after taking the plunge on a 2-year contract with a $500 Sprint Treo 700p the year before. At first I was delighted at the step up to a smartphone with high speed data. Then reality kicked in months later and I found myself devising a host of coping mechanisms for using the damn thing due to its massive amounts of failure: daily crashes (often while attempting to answer a call), unusable Web browser, unsupported MMS messages, OS bugs galore, and on and on. It sucked, and I was paying $118 a month for the displeasure of using it, with a year left in my contract.

Then came the iPhone. I sat on the sidelines for 6 months before finally succumbing to its charms (which aren’t without limit, admittedly), and so, like so many of you out there, I tried to get out of my Sprint contract. I’ll spare you the details and anguish. Suffice to say I had my Brokeback moment (Sprint, why can’t I quit you?) and getting out involved a hefty fee and plenty of sturm und drang. In the process of jump-starting my cell service, though, I learned quite a bit about what was available on the market and where the industry’s trends are taking it. And after the dust settled, I’ve come out of the process looking at the world with a rather un-Grouse-y optimism.

Glass half-empty view: We are at the Episode IV: A New Hope stage of the cellphone game. With the advent of the iPhone, the competition got a much-needed kick in the ass and in the near future we’ll see everyone offering streamlined user interfaces and handsets, with powerful, useful, converged features that play nicely with others. The announcement of the open-source Android platform, promises from Verizon, and new pricing from Sprint show that the market is coming around to finally giving the consumer a shot at what they really want. It’s as if someone shouted “We’re all clear kid, not let’s blow this thing and go home!” and the Death Star is in cinders.

But taking this metaphor one step further implies that the Empire will not just disappear, but is simply waiting to strike back. So, will Android’s dozens of partners actually produce anything worthwhile or will the collective project fizzle in committee? Is Verizon really up for opening up their network, or will they simply offer up new ways to lock down the consumer once again? And no matter how nice unlimited sounds, is $99 a month really a price point the average Sprint customer can hack? Is that the best it can do to keep from continuing to hemorrhage customers?

Glass half-full view: We’re skipping the Empire’s strike back altogether. After iPhone 2.0 comes out, addressing all of version 1.0’s failings, the big boys are forced to compete with bigger and better, or wither away like Motorola. We’re all a bunch of happy Jedis, partying with Ewoks on our forest moon, rejoicing in victory and tech bliss.

While we wait to see if the iPhone genie flourishes or is put back in its bottle, I’ll offer a few cellphone-centric words-to-the-wise for the short term:

Don’t exchange short-term benefits for long-term well-being. And by that I mean think real hard about buying a phone or signing a service contract based on a rebate—rebates are the crack of the phone industry. For phone companies, the loss on a handset is more than made up for by the pricey long-term service plan you’re locked into in exchange. Besides, that $100 rebate usually equates to just a month or two of free service and may not compete with plan fees on another carrier anyway.

Every wireless carrier offers month-to-month service. Once your contract expires, don’t renew. Why risk having to pay a $200 fee for canceling a contract, when you can be a free agent—contracts are what keep phone companies from having to innovate after all.

Spend five minutes with a calculator and do the actual math. When I ditched my Sprint service and went for AT&T, I realized that even with the $200 fine for breaking my contract and the $400 cost of an iPhone, I’ll still save money over the year versus staying with Sprint (even with their new plan), and have virtually the same plan with an exponentially better phone.

And if you simply have to get out of a contract and find you will lose money overall, hit up celltradeusa.com or cellswapper.com. For a small fee they’ll try to match you up with someone who wants cellphone service and will take over your contract. Or you can simply find a place out in the sticks that out of your provider’s coverage area and claim your employer is relocating you there, against your will. In your best puppy dog voice: “I’d love to stay with you, Verizon, but my company just won’t let me!”

Hit the comments section below for your predictions and gripes, and further insights for getting what you want in the cellphone shell game.