For when you just HAVE to beat everyone at Call of Duty. 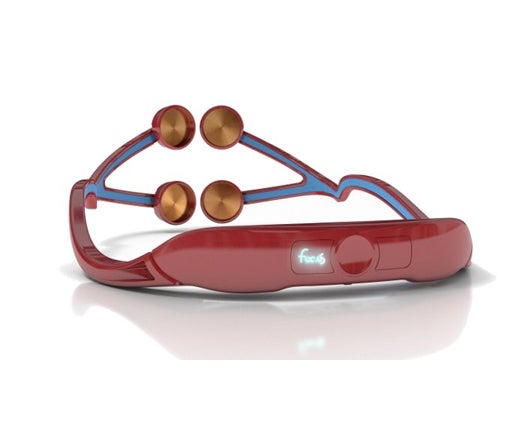 Foc.us is a company that makes headsets for gamers. Those headsets, starting to ship in July, send electricity through your brain. This is their pitch:

If that sounds a little sketchy to you, that’s because it probably should.

The excellent NeuroBollocks blog explains how transcranial direct current stimulation (TDCS) is an interesting idea: sending targeted, low-level electric currents through the brain with TDCS excites certain regions, which could have implications in treating depression and stroke victims. Plug in a patient for 20 minutes, and you could get the effects for up to days at a time. So foc.us is marketing $249 headsets (“Maximum 2 headsets per order.”) that claim to “[e]xcite your prefrontal cortex,” thus improving your gaming ability. To the company’s credit, at least one study suggests hooking up a 9-volt to your skull could improve gaming ability, although that was all done in the lab, under professional supervision.

That’s definitely not the only field TDCS is exploring. Brain-zapping for medical (or extra-medical) purposes has been around for years: Giovanni Aldini was using electricity to treat treat patients with personality disorders in the early 19th century. But with the rise of brain scans able to show the results of electricity pumped into the brain, TDCS and related processes like transcranial random noise stimulation are undergoing a boom. TDCS, although still controversial, could be used to improve math skills (or get you high).

Still, NeuroBollocks outlines some of the issues with foc.us’s claims:

So – does it work? Possibly… But it almost certainly doesn’t do what the company says it does. For a start, if you want to “get the edge in online gaming” wouldn’t you want to stimulate your motor cortex (at the top of the head) and/or the visual cortex (at the back)? It’s unclear how stimulating the prefrontal cortex (behind the forehead) would give you an advantage in games. In fact, (as this article explains) placement of the electrodes over the dorsolateral prefrontal cortex is most often used for treatment of depression and chronic pain, so potentially these devices might have more of an effect on mood or emotions than any useful gaming-related functions.

Sure, the process could result in skin lesions, and there’s still some debate over what’s a safe amount of electricity to juice yourself with, but do you want to beat your friends at video games or not? (Engadget tried out a prototype and noted “a strange, almost burning, sensation.”)

And no: according to the foc.us website, the headset isn’t FDA-approved: “The focus gamer headset offers no medical benefits, is not a medical device, and is not regulated by the FDA.”

Can’t we go back to the good old days, like three weeks ago, when people were just shocking themselves to improve video games for fun?