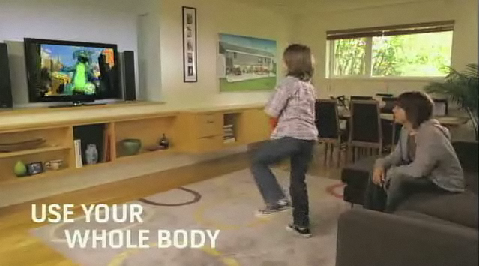 Today at E3, the annual video game conference in Los Angeles, Microsoft took the wraps off Project Natal–a sophisticated new sensor bar for the Xbox 360 that installs under your TV and tracks your every move, effectively translating your motions directly to those of characters or objects in the game. And judging by the demo video they released, it looks pretty incredible.

Not only can you punch and kick through fighting games or turn a wholly imaginary steering wheel for driving, Natal will recognize your face with its RGB camera and sign you into Xbox Live or listen to and understand your voice as you call out plays in a football game, for instance. The demo even shows a kid scanning his own skateboard into a game by simply holding it at the TV, and seconds later he’s riding one that looks just like it, virtually.

If it works as advertised (a big if, as all we have to go on so far is this Microsoft-produced video shown during a keynote), the possibilities are pretty incredible. There’s a lot of only-in-scifi stuff in this demo, including a fabled Minority Report interface (the Holy Grail!) for scrolling around an interface with your hands only.

Several companies have tried without much success over the last few years to integrate gesture-based controls into their gadgets, but it looks like Microsoft is making a concerted play for actually making it work. The whole thing looks a lot like 3Dv’s Zcam, which we looked at a year ago and is thought to be at the heart of Natal’s tech. So consider us excited to see this thing in real life.