SeaDoo’s 255-Horsepower RXT iS: The World’s Most Advanced Jet Ski Tried to Rip My Face Off

As you can see from our on-board camera, going 70mph on a jet ski is, well, scary. Thankfully, the RXT is the first personal watercraft with a brake 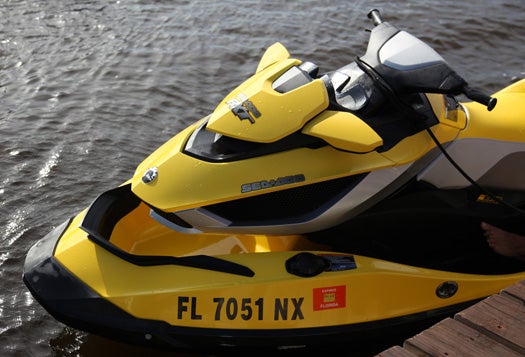 This is, for the most part, what it looks like, thanks to a GoPro Hero Wide camera mounted on the hull by our buddy Joel Johnson:

What you don’t see or hear are my two fists white-knuckling the steering handlebars, my legs kicking out from under me while plowing through the chop, my high-decibel screams that no one can actually hear (this thing seems to be able to outrun the Doppler effect) or my eyelids catching the wind and refusing to close, Clockwork Orange style. Needless to say, despite feeling like I was toeing the edge of an already-extreme envelope, the feeling of going from zero to sixty on the water in no time at all is something I wanted to do over and over again.

But the RXT iS (and its sister ski, the GTX Limited iS) aren’t just about raw power–they’re also the first jet skis with a braking system (called iControl) for slowing things down. Squeeze the left handlebar grip and a computer-governed gate will descend in front of the jet of water that normally propels the craft forward, reversing the flow and creating drag under the hull. Thankfully, the computer won’t let you slam on the brakes at 70mph and go flying over the nose; reverse thrust is doled out in a controlled fashion and doesn’t really kick in until you’re at about 20mph or slower, at which point a significant reverse-wake froths up around the hull as it slows down.

Also handy is the braking system’s reverse gear, which makes docking and maneuvering at no-wake speeds significantly easier. Instead of moving forward whenever the engine is on, the iControl-equipped skis have neutral and reverse drive modes, allowing for significantly more control at low speeds.

And in addition to the reverse-thrust braking system, both skis feature an intelligent suspension system (hence the iS designation) which can be tuned on the fly with toggle switches mounted to the steering column. Essentially, the hull is fully separated from the seat and steering column section, which dampens the shock of rough water. The first day of our test drive off North Carolina’s notoriously wind-swept Outer Bank we saw three- to four-foot seas with winds gusting over 35mph–conditions that make jet-skiing with any craft shall we say uncomforable on the nether parts–yet alone a ski capable of 70mph. But the iS system definitely took the bite out of the chop, taming maneuvers that on most craft could be considered suicidal down to something more like mild to moderate insanity.

But in some ways, 255hp is almost too much. Back on land, as my face’s skin settled back in to its normal shape (and as stings of windburn began to emerge), I compared notes with some of my fellow testers. While I managed to keep from bailing on my rides, some were not so lucky, telling tales of having the wind knocked out of them when hitting the water at high speeds after losing it in a turn. With a craft this powerful, it’s all fun and games until you wipe out, and only then can you appreciate (and maybe even fear) the power that these skis have.

Mark Anders took the GTX limited for a spin for our August issue as well. For more on how the braking system works, check out his test drive impressions here.