We've been using the HTC Surround, one of the first class of phones to launch running Microsoft's fully revamped mobile OS. Is it good enough to forgive years of Windows Mobile misery? 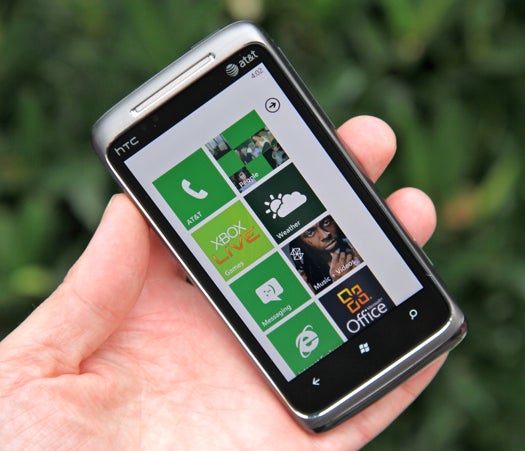 The interface consists of just two main screens: This customizable field of "Live Tiles" is your main home screen, and you can stick a wide variety of things there, from individual contacts to app shortcuts to dynamic widgety info-squares. John Mahoney
SHARE

So there’s this company called Microsoft. Perhaps the name rings a bell. Pretty good at software, services, that kind of thing. They’ve spent the last five years getting absolutely obliterated on the most important software platform of our time: the mobile phone. Just obliterated, as arch competitors Google, Apple, even Palm (Palm!) have whizzed past, slipping the occasional kick in the ribs to Windows Mobile 6.5, laying in the gutter there. Bleeding pretty badly.

But it seems as if the hemorrhaging may have finally stopped.

Pretty much everything. Windows Phone 7 is an entirely new OS, although you can trace its lineage back through the Zune family. Just like Windows Mobile 6.5 (and Android), it will be available on a wide variety of phones from different carriers worldwide. We tested the software on the HTC Surround, coming to AT&T in November, but this review will focus mostly on the OS.

A lot. While a bit rough around the edges, WP7 feels carefully considered down to its core. Which is of immense importance. Even in version 1.0, it does a lot of things really, really well.

Creativity: Microsoft created an exceptionally unique smartphone UI. Bye bye icons and faux three dimensionality. That’s a fairly brave choice, when you think about it. Even as some legacy computing metaphors start to slip away or evolve–the file, the desktop–icons have held fast. But WP7’s “Live Tiles,” after a brief, somewhat disorienting acclimation period, work really well. What’s smart is they serve as both icons and widgets–the two core UI elements for most smartphones, which are often at odds.

Other choices are equally bold: two primary home screens serve as the only foundation; a militant adherence to text over graphics to convey choices; a new sense of scale, where the screen can always be swiped over to see more. None of these things have changed significantly in the months since the initial rollout, but for me, they made the jump from concept to practical reality with ease.

Performance: The HTC Surround I used for testing has a now-standard 1GHz chipset, and at no point did I feel WP7 was too much for it to handle. But setting aside megahertz and megabytes, it’s often a poorly designed and implemented interface that’s responsible for a feeling of sluggishness in our gadgets. WP7 is designed with a certain fluidity–animated twirly flourishes when you tap a tile; bounciness when the notification drawer drops from the top of the screen; a running spark that trails across the length of the screen as the standard “I’m working on it” notification. The keyboard keeps up with quick touch-tapping. The whole thing feels quick.

Integration of Services: And here we see where Microsoft can blow everyone out of the water. It’s a funny feeling, scrolling down the apps and realizing that yes, all of these apps and services were created by the same company! Together at last! Zune, Office, Windows Live and Hotmail, Xbox Live–all are pilars (or “Hubs”) of WP7–meta-apps for certain activities that can hold additional apps. And the main third-party service focus here, Facebook, is integrated quietly but smartly. Status updates pop up everywhere–not in your face, but just a side-swipe away. All of your contacts have their Facebook photos associated. You can write on people’s walls, if that’s your thing, unobtrusively from the contacts app. Individually, each service could stand up to its own mini-review, but overall, the general integration is a resounding success. 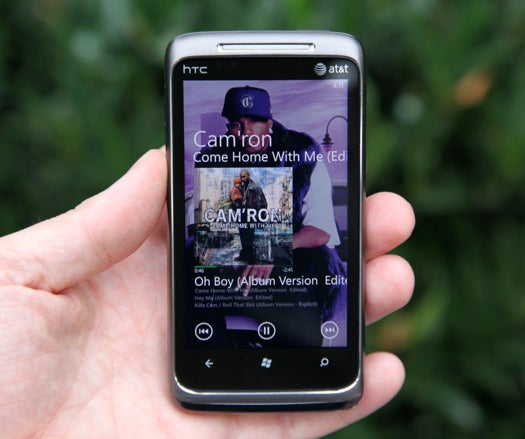 The Zune integration is really nice–very similar to what you’ve seen on the Zune HD. If you have a web connection, artist photos and info gets piped in automatically.

It’s a first-run release of a major mobile operating system. There Will Be Bugs. And rough spots.

A Little too Creative: While I love the interface for the most part, there are parts of it that make very little sense. With few if any exceptions, an application’s settings are only found in the universal “Settings” app. Valuable information, like, say, your current 3G reception or wi-fi connectivity in the omnipresent top status bar, are hidden unless you tap for them. Stuff like that. In some ways, this is good–Microsoft picked a strict set of rules for a UI, and they stuck with them, at times militantly. Now it’s time to find a happy medium in future versions.

Multitasking: Is handled confusingly at best. Some apps resume where you started, some don’t. Some emerge from a lock screen where you left them, some restart. Working through the phone you have no sense of what’s running in the background, which to some extent is a nice simplicity, but on the other hand is frustrating as hell.

Searchiness: The overall strategy for sorting and handling lots of information on WP7 doesn’t go too far beyond “search for it.” After importing from Google and Facebook, my contact list was gigantic. I regularly talk to maybe eight percent of these people, and to reach that eight percent, I generally have to type a part of their name into a search box. No good.

Doubleplus ungood for finding apps and other downloadables in the Zune Marketplace. Searching “Twitter” brings up every song, album or video with Twitter in the title in a massive unsorted list. I still haven’t found the good Twitter app. Crazy.

Windows-Only For the Full, Zuney Experience: Please, Microsoft, bring Zune to the Mac. There are a million reasons not to do it, some of them potentially dealbreakers, but with Apple reporting today a 20% new-consumer market share for the year, that’s 20% of people who will use the stripped-down Windows Phone 7 Connector app. Zune isn’t perfect, but Lord knows, iTunes could use some competition to blast it out of complacency. 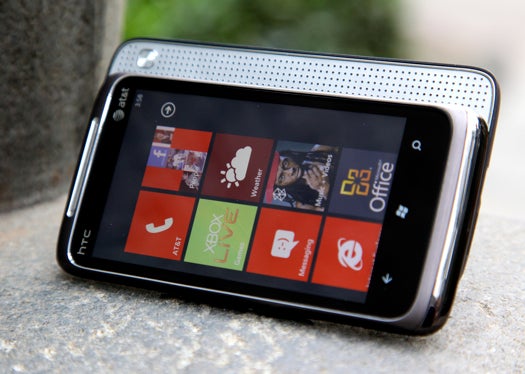 Sucks! HTC, usually known for sleekness, has decided that a gigantic slide-out speaker is somehow a good idea with the Surround. It adds a half-inch of girth to the phone, at least, and still sounds like a speaker inside a phone. I can’t tell you the disappointment I’ve witnessed when someone holding this phone for the first time pops the slider and sees not a keyboard, but a speaker grille. So, should you buy the HTC Surround? Absolutely not. Wait for sleeker hardware, like the Samsung Focus, for your WP7 purchase.

Probably around $200, probably available sometime in November. The Surround is one of five phones dropping in the U.S. in the next 30 days or so running Windows Phone 7.

We have a new contender in the field of exciting smartphone operating systems. With Apple’s OS X looking more like their iPhone and iPad operating by the day, it’s not absurd to say that mobile software is the only software that matters today and for the future. And the more exciting players we have duking it out, the better.

The interface consists of just two main screens: This customizable field of “Live Tiles” is your main home screen, and you can stick a wide variety of things there, from individual contacts to app shortcuts to dynamic widgety info-squares. 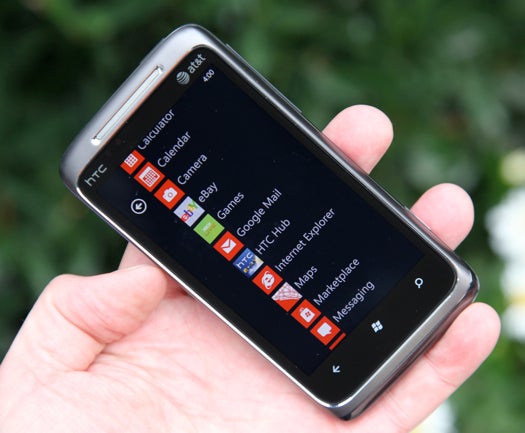 And to the Right…

And a swipe to the right brings you to the other main screen, where every app gets its own alphabetical icon and listing. That’s it as far as the main interface goes. 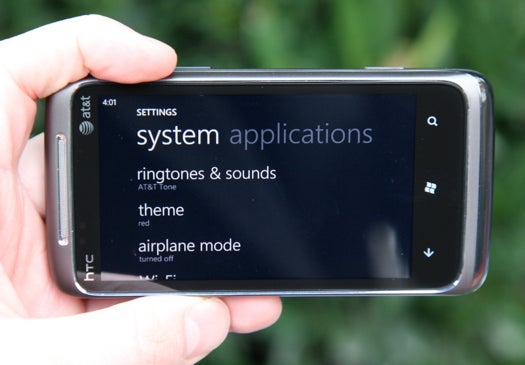 Menus, including the main preferences app seen here, are almost entirely text-based. Get ready to read. 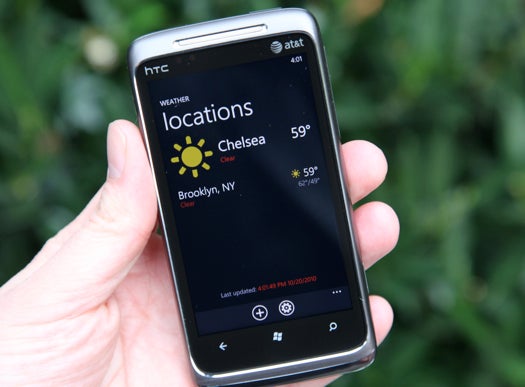 Overall, I really like the graphical style of the Microsoft-produced apps; they blend in well with the rigid two-dimensionality of the OS. 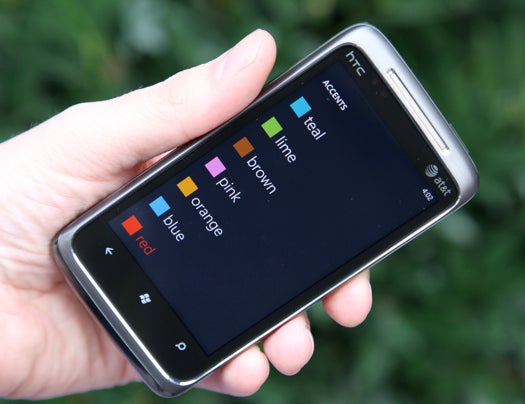 Customizations options are limited at this point to choosing the color of your Live Tiles, and either a white or black background. Your lock screen photo you can choose, too. 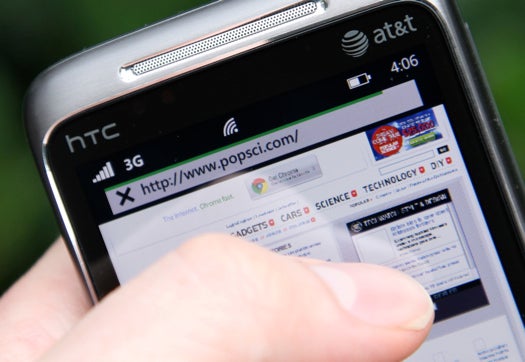 So rigid is the UI scheme that even mobile phone basics like signal strength, wi-fi connectivity and battery life are generally hidden–they pop up if you tap the top of the screen. I found this pretty annoying, actually. 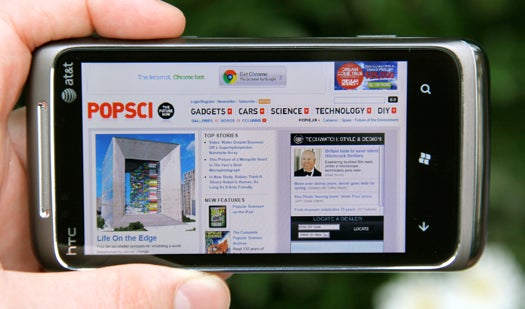 It feels mighty strange to click on “Internet Explorer” to browse the web on a phone, but IE holds its own with the mobile competition. Nothing exceptional, but nothing horrifically bad. 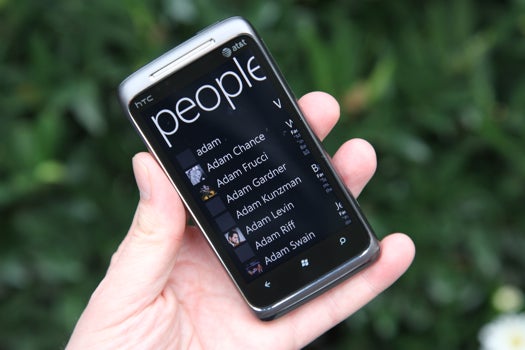 The pros and cons of the list-of-text motif are most evident in contacts, which after pulling in Facebook and Google with no discernible way to sort or filter, can become quite an unruly list. 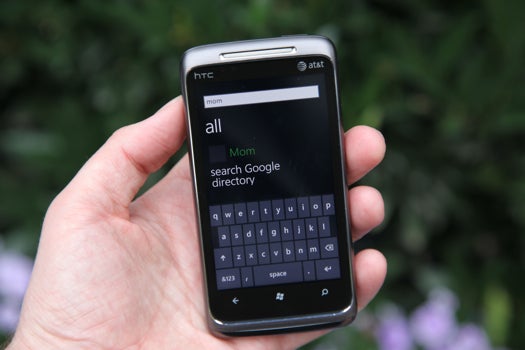 You’re supposed to find people exclusively with search, which is ok I guess, but requires more button presses than I’d like. 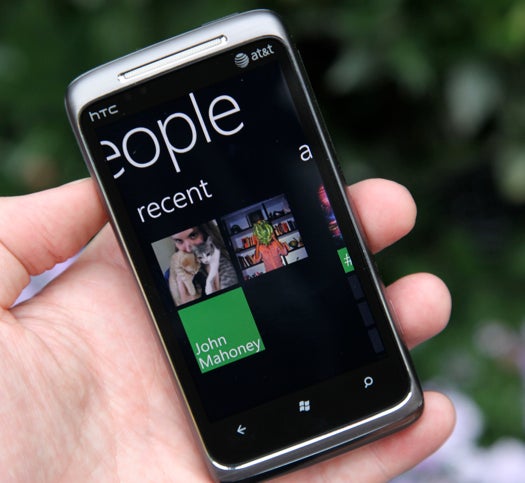 You do get a nice dynamic list of recently used contacts, which will house your most frequent friends.

The Zune integration is really nice–very similar to what you’ve seen on the Zune HD. If you have a web connection, artist photos and info gets piped in automatically. 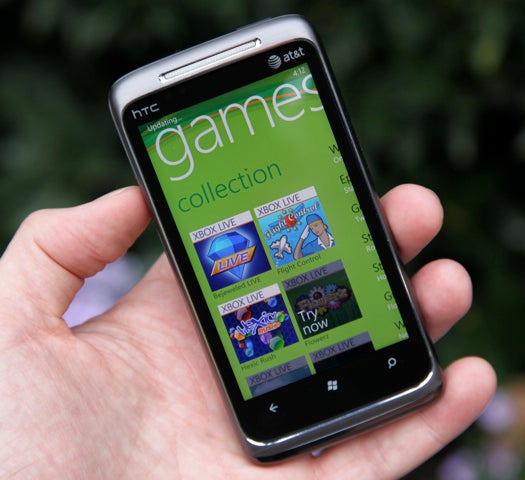 Xbox Live on the phone, nice. Games are housed not as individual apps but inside the overarching Xbox Live “games” app. The store isn’t yet chock full of options, but there’s a lot of potential for great things here… 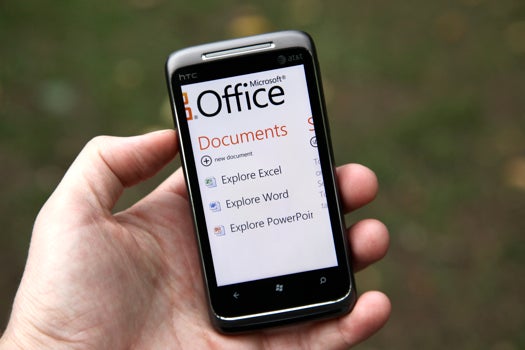 The mobile Office suite is nicely integrated for quick edits, and a seperate notes app is integrated here for jotting down quick bits of info.
Google
microsoft