How The Apple Tablet Could Ruin Computing 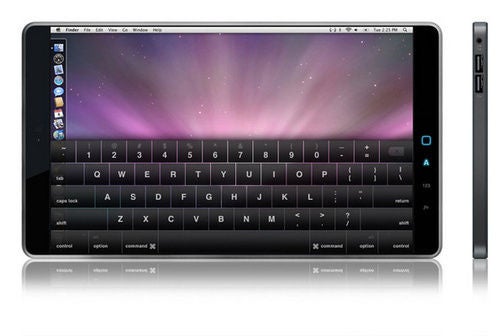 Though whispers of an Apple tablet device practically predate Australopithecus, this week they’ve reached a fever pitch. It’s been reported by several news outlets that the supposed iTablet will feature a 10-inch touchscreen, both Wi-Fi and 3G data, and a custom ARM processor. It’s already been priced at $800 and even greenlit by none other than His Majesty Steve Jobs for a September release. Not one iota of this has been officially confirmed, but the prospect of a Mac Tablet seems more within reach than ever before.

This is not a good thing. If an Apple tablet is ever actually released, we should all be very concerned for the future of what most of us take for granted today: our digital freedom.

The Apple tablet will likely sit somewhere in between the iPhone and a Mac laptop. But it won’t just blur the line between them—-it will attempt to erase it. This should scare you because it will be the biggest leap yet towards the notion of a completely closed “desktop” operating system.

Much of the iPhone’s success is due to the fact that it’s the first smartphone in history that feels like using a real computer. But, think for a minute how different it still is from a desktop or notebook. On a Mac computer, you’ve got a filesystem you can access and monkey around with. You can download any program you wish (from wherever you wish) and install it. You can open up the box and customize the hardware. You can run Windows or Linux on it if you were so inclined. The iPhone, on the other hand, is by design like living under Dad’s roof–convenient, but restrictive. Without some serious rule breaking, you’re only allowed to do the things Dad says are OK to do. Want to download a cool program? Ask Dad. Want access to the files in that 32GB of storage? Sorry, but Dad says no. Want to do the whole ‘Manually Managed Music’ thing on more than one computer (like every iPod ever made)? Dad took away that privilege, and as he is wont to do, he won’t tell you why: “They are different devices that behave differently,” is Apple’s response. Thanks.

Now, imagine what life would be like if your laptop or desktop was subject to the same draconian rule. If Apple decided it didn’t want you using Flash anymore, it would take it away and there’d be no way short of potentially breaking the law for you to ever get it back. If you wanted to download a useful new program (Google Voice, perhaps?) you’d have no choice but to go through the App Store to get it, hoping with fingers crossed that Apple had allowed it to exist—though, experience would tell you otherwise. If you wanted to move files from your computer to another device or just to another folder, you’d need a paid MobileMe account. And, any freedoms you do have today could just as easily be gone with tomorrow’s software update.

Like with most of the iPhone’s failings, we can probably thank AT&T for its Orwellian lockdown. So far we’ve been somewhat forgiving of the restrictions put on the iPhone because, well, that’s how cell phones and cell phone providers have always done it. AT&T spends millions maintaining its 3G data network, and to protect it, any devices that access it have to play by AT&T’s rules.

There’s a very strong indication that the Apple tablet will be sold with a mobile data connection at a subsidized cost, like many netbooks are today. This is where rumors of the device get especially worrisome. Hobbling a phone is one thing, but imagine our closed PC scenario now with AT&T (or Verizon, as many of the rumors indicate) telling you what you can and cannot do with it—-like an overbearing Mom to Apple’s despotic Dad. The thought alone makes me shudder.

As oppressive as Apple has been thus far with the iPhone, its crimes pale in comparison to what AT&T has disallowed. Yes, tethering and MMS are the obvious ones that come to mind, but AT&T has also blocked things like 3G video streaming via the Sling Media app and 3G voice calls via the Skype app. What would AT&T square up in its crosshairs if it held sway over your desktop experience? Video chat? Hulu? Fonts it doesn’t particularly care for? Yikes.

Apple defends the iPhone’s many restrictions by calling the platform a “walled garden.” It keeps the OS on lockdown to protect and make things easier for us. It’s one of Apple’s core design philosophies–simplicity equals usability. And yet, out of the other side of its mouth, it expounds the virus- and problem-repellent virtues of the far-less-restrictive desktop flavor of OS X.

And let’s not forget–keeping the iPhone closed and under control protects two of Apple’s major money-makers–the iTunes Music and App stores–in a warm blanket of exclusivity. It takes a generous cut for itself while simultaneously locking out any hint of competition.

Will the FCC investigation into Apple’s denial of the Google Voice app change any of this? You’d better hope so. Because if Apple had its way, it could gleefully exercise the same level of control over OS X as it wields over the iPhone. The company has already moved the iPhone’s frustratingly non-swappable battery up to the MacBook and MacBook Pro lines, so why not its crippled OS as well? The tablet is the missing link. Get people comfortable with using the iPhone OS on something that more resembles a netbook than a cell phone, and it’ll be an easy sell to convince them that it’s just as well-suited for full-fledged notebooks, too, and eventually even desktops if they still exist by then. We happily accept our iPhones, Xbox 360s, PS3s and Wiis as closed platforms, so is this really that far-fetched to imagine? And once Apple beats us into submission, you can bet Microsoft would follow suit.

But who knows, maybe Apple will surprise everyone and release an Apple Tablet with a fully open OS X variant. At this point, it’s all just speculation, so despite evidence of the contrary, it’s still a possibility. We’ll just have to wait and see.

But regardless, do yourself a favor and take a spin through your OS today. Open your file browser, copy a document and throw something else in the trash. Download a random program off of the Internet and install it. Because, friends, the days of such freedom within an operating system may be numbered (Linux notwithstanding). It could all be coming to a flaming end, and a Mac tablet would be just the beginning.