The Future Of Money

Currency has gone from cows to coins to paper to plastic. The next big disruption? We could all be spending digital dough. 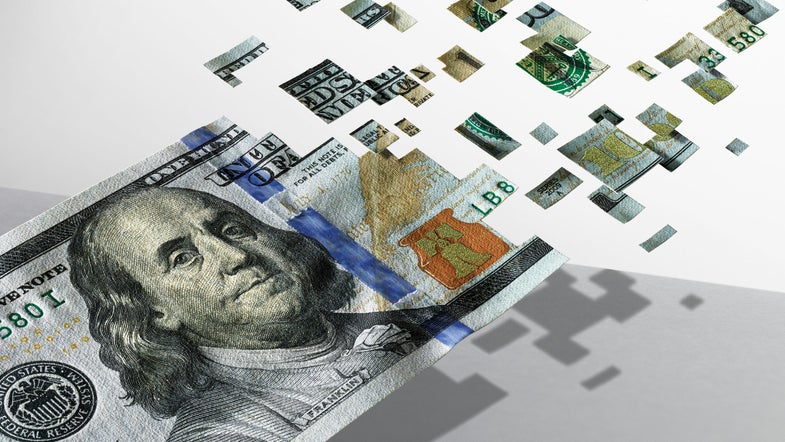 The next time you pull a tattered $5 bill out of your pocket to pay for a coffee, consider the fact that you’re handling one of society’s oldest and most important inventions: money.

Relatively soon after humans decided that we liked living in groups, instead of in panda-style isolation, we came up with ways to value what we had—and make people pay for it. We bartered cattle and grain until the Lydians—the Bronze Age inhabitants of what is modern-day Turkey—realized those were hard to stuff into a wallet, and introduced government-minted coins. It turned out coins were still a pain to carry around, so eventually they evolved into the paper money we all use today.

But paper was still just a stand-in for metal: Sure, coins mostly disappeared, but we were symbolically carrying gold around in the pockets of our bell-bottom jeans until 1971, when Richard Nixon took the U.S. off the gold standard. Divorced from the physical, money became a kind of belief system. It went from representing something precious and valuable to representing value in and of itself. Everyone agrees that if you walk into Starbucks with a $5 bill, you can walk out with a latte.

Divorced from the physical, money became a kind of belief system.

Of course, rarely do any of us walk into Starbucks with a $5 bill anymore. We walk in with a credit card, or a Starbucks gift card, or with an Apple Pay app on our iPhone. And that’s another way money has changed. It’s become more and more abstracted. It’s numbers sitting in our bank accounts or on our credit-card statements. It’s a series of digital ledgers kept by banks, payment processors, and financial startups. The USA Network’s Mr. Robot imagines the fragility of that system. The plot follows hackers who planned to break into the servers of the country’s biggest lender and erase all the data—obliterating debt and ushering in a new anarchic, moneyless society.

Money grows more complex by the day, particularly now that Silicon Valley has taken it up as one of its causes célèbres. Startups offer dozens of schemes to disrupt it. Yet, Silicon Valley, which has changed the world in so many fundamental ways, hasn’t actually changed money that much; it’s just evolved how we spend it. Paypal, Square, Stripe, Venmo—they’re all apps built on top of the old technology that is money. Just as paper once required metal, most payment apps require a bank account or a credit card.

The only true disruption to money that we’ve seen in the Internet age came not from a Palo Alto garage but a list-serv for tech-savvy libertarians. Bitcoin, which spun out of the mind of the pseudonymous engineer Satoshi Nakamoto in 2008, is a cryptographically maintained currency with value imbued by the computers of its users, not a government mint. Theoretically, it is far more secure than credit cards. If you used Bitcoin to buy something at Target, say, and Target later got hacked (possible, as we have learned), you’d suffer no consequences. It’s like programmable cash.

But that’s not a concept most people can get their heads around, which has been Bitcoin’s great limitation. It might overcome that hurdle, or it might not. The only certainty is that money will keep evolving. If money represents value, and value is a reflection of our needs and desires, then money is simply a reflection of us. And it will continue to change as long as we do.

Got a question about the future of money? Kashmir Hill will be a guest on Digg Dialog on December 22 at 1pm EST. Tune in to watch and/or post a question.