This chatbot will deal with Comcast customer service for you

Trim wants to save you money—and potentially hours of despair 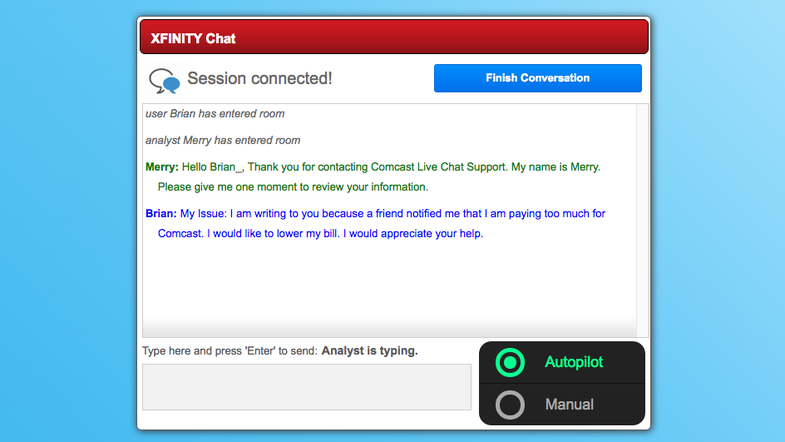 Comcast isn’t exactly known for its great customer service. Much (metaphorical) ink has been spilled over representatives refusing to let customers cancel their service, data limits on home internet, and class action lawsuits fighting Comcast fees and allegedly false advertising. What’s more, earlier this year a California assemblyman introduced legislation that would allow customers to get rid of the service with “a simple click of the mouse.”

Shouldn’t there be a robot that can deal with Comcast for you—one that won’t take “no” for an answer? Yes, there should. And, now, there is.

Trim touts itself as a “fast-learning, software-driven assistant that takes care of your money so you don’t have to.” Basically, Trim’s A.I. looks through your finances (credit card statements, bank statements, etc.) and reminds you of all the recurring payments you’re making. You can then send Trim a message through email or Facebook and begin an automated process to cancel those services—and save yourself a few extra bucks each month. Trim’s A.I. can also challenge overdraft fees from your bank, which Trim co-founder/CEO Thomas Smyth says works nearly 50 percent of the time.

Trim users eventually wanted to know if the A.I. could help with one of the most bothersome cancellations of all: internet from Comcast. The software company developed a chatbot—not an app, because, according to Smyth, “no one downloads apps anymore”—to talk to Comcast for its users.

Today Trim’s Comcast chatbot is live and free for anyone to download as a Google Chrome extension.

Trim’s Comcast chatbot was built in just a few weeks, and it’s been tested in beta with real Comcast service representatives for the last month or so. According to Trim, 70 percent of users have seen success, saving an average of $10 on their bill. Surprisingly, Smyth says the bot has yet to be called out as a bot by any customer service representative, though he figures it’s only a matter of time.

When you download the Chrome extension, it asks why you want to complain to Comcast. The only option available at the moment is “I just want some money!” but, according to Trim’s site, more options are coming soon, including slow internet, paying too much, and internet outages in your area. Once you’ve selected your reason, you’ll enter some basic information the chatbot needs to negotiate for you (the account holder’s name, email, phone number, and address).

You can watch in autopilot mode as the bot speaks with a customer service representative in real-time, or switch to manual mode and take over when necessary. You can also play Trim-hosted games like Tetris, Snake, and Pong while the bot does its thing. “Our users walk away from this interaction and they use adjectives like ‘hilarious,’ ‘fun,’ ‘super cool.’ These are not words that you usually hear associated with an interaction with Comcast,” Smyth says.

The bot has two goals, according to Smyth. The first is to lower a user’s bill. The second is to make sure the customer can maintain the same level of service, rather than being cross-sold or up-sold—Smyth doesn’t want users to get a better price but risk being locked into a contract they may have to break. “That may make sense for a lot of customers,” he admits, but “I’m a young person, I move around. I’m not necessarily going to be in the same place for two years.” Keeping that in mind, the team at Trim programmed the chatbot to flag a variety of keywords, including “contract,” to alert the bot and tell it to refuse the deal.

Smyth is aware of the luckluster reputation chatbots have, particularly after a hyped-up launch during the Messenger portion of Facebook’s F8 conference earlier this year (TechCrunch kindly wrote that Facebook’s early chatbots “still need work,” while Gizmodo went with a more blunt headline, calling them “frustrating and useless.”) However, Smyth says that Trim’s chatbot is different for one simple reason—rather than speaking to you, it speaks on your behalf (and he says it’s the first chatbot to do so).

Smyth doesn’t see Trim as an adversary of Comcast. In fact, he would love to work with them to improve the company’s less-than-stellar customer service, in both practice and reputation; he ultimately sees this bot not as a bot, but as a new form of customer service, which he hopes Comcast and others in the customer service industry will embrace.

“[Comcast] has said a lot about how they want to improve customer service. As a customer, I can’t say I’ve seen it, but I see a lot of opportunity,” he says. “Just empower the customer with a bot that takes them as far as possible in an automated fashion…That to me makes way more sense.”