Plastic bags are still bad for the environment, despite misleading reports 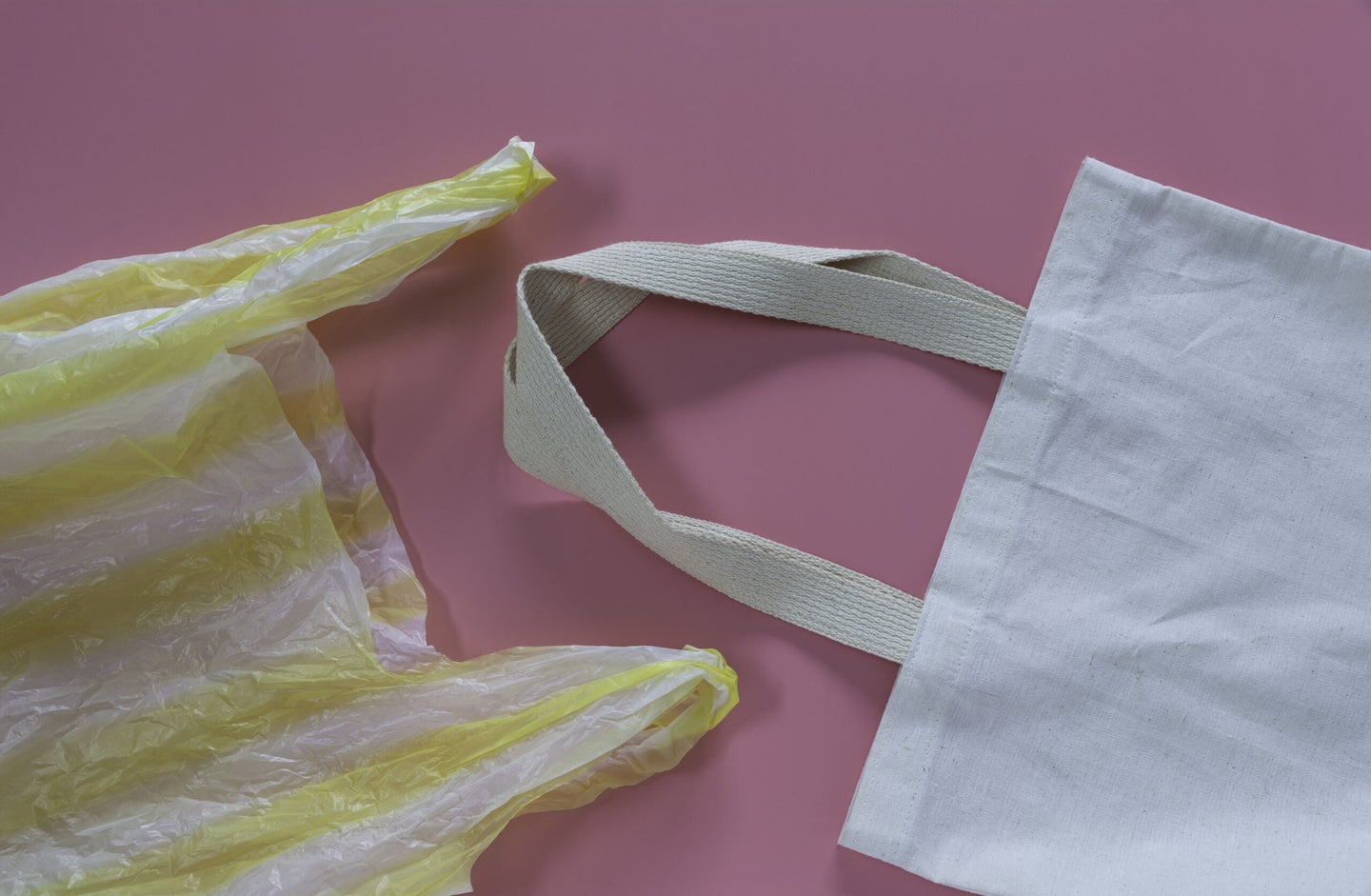 Among plastics, perhaps no item is as villainized as grocery bags. Canadian officials recently announced that the country would move to ban single-use plastics, including bags, by as early as 2021, and they’re just one of at least 32 other countries that have implemented similar policies.

That seems to be for good reason. Somewhere between 500 billion and a trillion plastic bags are consumed each year across the globe—that’s 1 to 2 million a minute—and a lot of those end up polluting the environment, harming even the tiniest organisms.

But an environmentally-conscious shopper might feel overwhelmed when they try to weigh the pros and cons of alternatives like polypropylene, polyester, and cotton totes. As a recent Quartz article pointed out, these options aren’t necessarily better for the environment, at least according to life cycle assessments that consider the energy and resources used to manufacture, transport, and dispose of them. In a Danish government study, researchers found that an organic tote bag needed to be reused 20,000 times before it had the same environmental impact as a lightweight, single-use grocery bag. Much of that impact is due to the crop’s demand for water and the use of an ozone-depleting chemical in manufacturing.

It’s easy to feel confused, even cynical, when faced with numbers like that. You’d have to use that organic tote every day for nearly 55 years to make it as environmentally-friendly as a plastic bag in terms of greenhouse gas emissions, resource use, and pollution impacts.

But here’s the thing: those life cycle assessments don’t fully account for the impacts of plastic, and might even be misleading.

“I’m not sure that a life cycle assessment comparison is always that helpful,” says Jennifer Clapp, Canada research chair in global food security and sustainability at the University of Waterloo. “Many of the life cycle assessment studies are basically looking at embodied energy and climate change, and that doesn’t address these questions of permanence, toxicity, and hazards [associated with plastic].”

Plastic is permanent. It can take a thousand years to break down, and even then it’s usually just breaking into smaller and smaller pieces, never becoming soil in the way a paper, cotton, or compostable bioplastic would. Eventually, it becomes tiny particles, or microplastics, which are increasingly a health and environmental concern. Last week, scientists reported that microplastics are accumulating deep in the ocean—not just floating on the surface—and that these particles were largely derived from single-use plastics. (Meanwhile, that cotton tote is compostable. You can toss it in a backyard pile or a curbside compost bin).

And, yes, film plastics like bags can be recycled. Many grocery stores, in fact, have bins where you can pitch those bags. Right now in the United States, though, less than five percent of plastic carrier bags are recycled. “[Single-use plastics] are lightweight and ubiquitous,” says Heather Trim, executive director of the nonprofit Zero Waste Washington. “They’re causing impacts to wildlife health, they are creating a large amount of litter in our open spaces, and they are causing a lot of problems in our recycling systems.”

The rest of the bags wind up in landfills, as litter on land and water, or as contamination in recycling centers. Landfills aren’t that big of a deal, since they’re fairly contained and waste is typically covered with a layer of soil or other material (though many bags do escape because of their light, parachute-like design, leading landfills to spend thousands of dollars on trying to catch them). In water, they’re ingested by organisms, sickening or even killing the animals.

Heartbreaking photos of whale and bird guts clogged with plastic debris abound on the internet, but littered bags aren’t only a problem in the ocean. When thrown into a curbside recycling bin, plastic bags go on to contaminate recycling centers. Processing centers use rolling cylinders to separate materials, and the plastic bags become tangled around these cylinders. Workers have to stop the plant, climb onto the equipment, and cut out the bags. It’s dangerous and time-consuming—one large company, Waste Management, estimates removing these bags takes a total of 140,000 hours each year.

Even with these efforts, bales of compacted recycler-bound material are still 11 to 20 percent contaminated in the United States, says Trim. That means that they’re less valuable for recycling. Since March 2018, China (a long time receiver of our recyclables) only accepts plastics and fiber below 0.5 percent contamination. A lot of the contamination is single-use plastics like bags, says Trim. In this way, our reliance on these plastics is harming the entire recycling industry.

All these impacts of plastic bags—the litter, human and animal hazards, and contamination—are not considered in life cycle assessments.

On top of that, LCAs only compare options given the conditions we have now. So if, for example, we moved our energy system toward low or zero carbon sources, there would be less greenhouse gases associated with the transport and manufacture of cotton to make a tote. You may not hear about that aspect, though, since it’s not in some people’s interest to get into that nuance. “These [plastic bag] industries have interests in maintaining the status quo,” says Clapp. “Industry always talks about the life cycle assessments because they can say plastic bags embody less energy in them.” As an example, the American Progressive Bag Alliance hired a consultant to prepare a life cycle assessment for grocery bags, and used the findings to prepare a fact sheet arguing that “Bans and taxes on plastic bags are misguided policies that don’t make sense.”

Still, LCAs are useful as a tool for figuring out what needs to change, according to Travis Wagner, professor of environmental science and policy at the University of Southern Maine. Most LCAs, he says, tend to agree that cotton totes use the most resources among carrier bags. But the takeaway isn’t that we should just give up and keep using plastic. Instead, these assessments can guide us toward better alternatives. For example, hemp could be a less resource-intensive alternative to cotton. “The original intent of life cycle assessments was to identify where you can make improvements,” says Wagner. “Some of these [LCAs] are misinterpreted to say we can’t use this type of bag anymore.”

So what’s a well-meaning shopper to do? Even if we take the life cycle approach, some materials aren’t so bad. The Danish study found that you only need to reuse polypropylene bags—the durable cloth-like totes often sold at supermarkets—52 times to match the impact of plastic grocery bags, or once a week for a year.

It’s also important to note that LCAs are only truly accurate for the location they describe. Every municipality has different costs associated with waste management, which changes the environmental impacts of a given material, says Wagner. Another carrier bag LCA done in the UK found that polypropylene bags only need to be reused 11 times to have the same impact as a single-use bag. And in the same analysis, a cotton bag needed 131 reuses—not 20,000.

Regardless of the material, the best bags are the ones you already own. Most of us have a pile of reusable bags that we’ve accumulated over the years, many of them free promotional items. So, there’s usually no need to buy a fresh set of organic cotton totes. If you need a new bag, “a reusable plastic bag made from recycled plastic is the best, hands down,” says Joseph Greene, sustainable manufacturing and engineering professor at California State University, Chico.

And if the resources used to make reusable bags still trouble you, there are DIY alternatives. YouTube has plenty of videos on turning old t-shirts into totes.

Finally, when it is time to part ways with a plastic bag, you can cut back on impacts by taking it back to the grocery store—many collect bags to recycle them. Polyethylene bags, which include the single-use bags and their thicker, reusable counterparts, can be recycled 15 to 20 times, says Greene. When the plastic is processed into pellets, it’s worth between 75 to 80 cents a pound, which is more than plastic bottles. The material is in high demand for use in wood-plastic blended material popular in construction.

According to Clapp, moving away from plastic bags and other single-use plastics is both about changing personal habits and about larger systemic change. “I don’t think all of the burden should be on the individual,” she says. “It’s a partnership with government and with industry.”