MEGAPIXELS: For a technicolor nightmare, see this fish in high definition

New imaging techniques straight out of a horror movie. 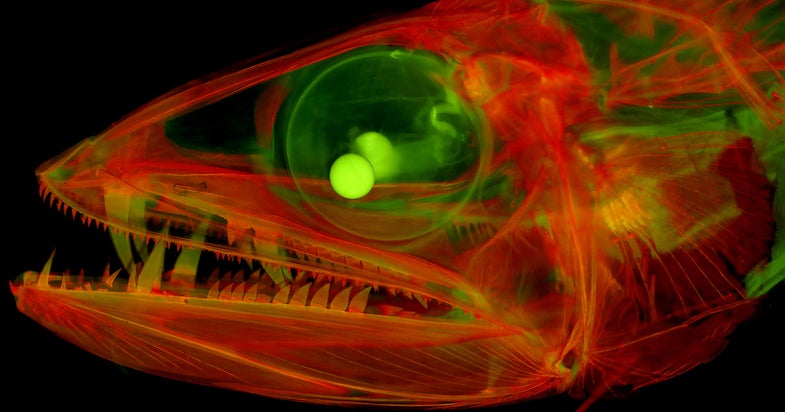 Announcing all-new, high definition nightmares, brought to you by researchers at the University of Kansas, where biologists have developed new techniques to pose and image certain animals.

The ability to compare vertebrate skeletons in excruciating detail is important for anatomists and taxonomists who need to note minuscule differences for their research. Traditionally they’ve gone about this work by “staining” the bones with dyes, and “clearing” out most of the muscle tissue by dissolving it with a digestive enzyme. You wind up with a colorful but floppy specimen with see-through skin—ready for its close-up.

The new methods supercharge that process by creating the option to pose the creature. After a year of trial and error, a biologist-taxidermist duo cooked up a concoction of gelatin and glycerine that sets slowly enough to suspend your stained-and-cleared specimen in the gel and get your tools (and fingers) out of the way with time to spare. It’s basically Jim Halpert’s dream technology.

Arranging specimens freely will let biologists get clear shots of hard-to-photograph body parts (like the second pair of jaws at the back of a fish’s throat), but that’s only half the story. One of the dyes used to stain the animals shines bright red when exposed to certain types of light. “It fluoresces like a Grateful Dead poster,” evolutionary biologist W. Leo Smith said in a press release. Photographs using normal light can blur fine features, but the red fluorescence produces sharp pictures that will, for better or for worse, etch every last detail into your memory. Sweet dreams!