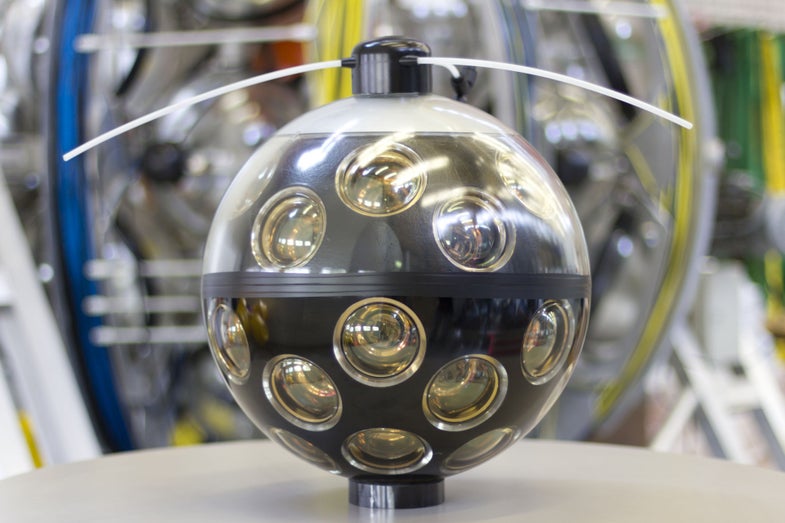 If trillions and trillions of tiny particles rained down from the depths of space and passed through your body right now, would you be concerned? If yes, too bad. Since you started reading this sentence, it’s already happened. But have no fear: Some of those little dudes carry messages about the universe’s strangest secrets.

The particles are neutrinos, likely the second most common particle in the universe behind light particles. The Earth is constantly bombarded with them, and understanding where the highest energy ones come from can give us a whole new view on the craziest things that happen in space, like supernovae or the black hole at the center of our galaxy.

Neutrinos are really difficult to detect, though, so seeing them requires building giant experiments in caves or underwater. Today, the 240-person Cubic Kilometer Neutrino Telescope collaboration, or KM3NeT, released the newest plans on how they’ll construct the largest such experiment ever built in the depths of the Mediterranean Sea.

“Neutrinos are ideal cosmic messengers because they interact weakly. That means they’re not easily stopped,” Maarten de Jong, KM3NeT spokesperson told Popular Science. “We can now look at the universe through different means.”

You might have heard about neutrinos from the debacle in 2011 where an experiment incorrectly measured them traveling faster than the speed of light. They’re part of the same family as electrons, but unlike the electron they don’t interact with the electromagnetic force at all. In the world of particle physics, a force is just a message with a set of rules sent between particles in one of four languages. Neutrinos mainly read messages sent in the language of the weak nuclear force, and ignore electromagnetism messages which they can’t read.

An artist’s interpretation of a star going supernova. Supernovae might be the source of cosmic rays and neutrinos.

Neutrinos have lots of important information. KM3NeT is specifically looking for the highest energy neutrinos in cosmic rays, which are super fast particles hitting Earth. We don’t know where they came from yet but have a sneaking suspicion it’s something weird, like supernovae or the black hole at the center of our galaxy. You see, cosmic rays split as they fly through the universe. The paths of some of the particles, like protons, bend as they travel through the magnetic fields in space. If we look in the direction these protons came from, we wouldn’t be looking at their source. Neutrinos don’t interact with magnetic fields, so if we know where the neutrinos came from, we know where cosmic rays really came from. There are other neutrino detectors like IceCube in Antarctica, and the Gigaton Volume Detector in Russia, but KM3NeT will be the biggest and look at a part of the sky unmonitored by the other two.

The experiment consists of a few kilometer-cubed networks of glass spheres housing detectors, each sphere tethered to a string of others with cables. Each cube will be located in one of three places near the bottom of the Mediterranean Sea: The first set will be off the coast of France and Italy, and eventually another one will be built off the coast of Greece. They must be this large to see the path the neutrinos took, and deep in the pitch black ocean so stray light doesn’t fool the detectors. They also face downwards into the Earth so they can focus on mainly the highest energy neutrinos that make it all the way through the planet, the ones from cosmic rays. Plus, the way the neutrinos shoot through Earth might be able to tell us some more important information, like their mass. 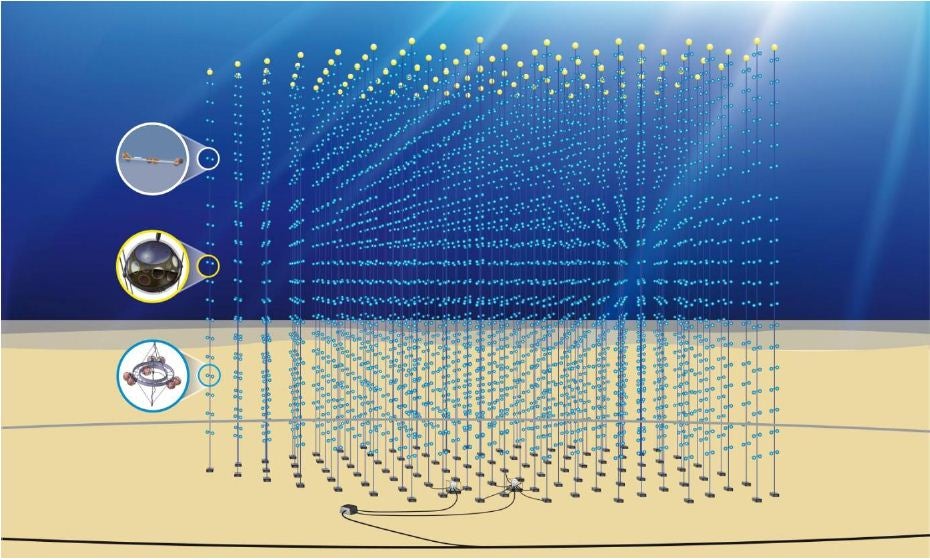 Neutrinos only weigh a tiny amount, so if they send a message with gravity, it’s far too small for our detectors to read. Weak force messages disappear after a tiny fraction of a second, so our experiments can’t read those either. The KM3NeT experiment instead waits for the neutrinos to send their weak force message to an atom inside one of the detectors. That neutrino’s message tells the atom to spit out a really high energy particle, one that can send electromagnetic messages. The glass spheres see the electromagnetic message as a faint blip of blue light as the particle travels through the water. The experiment can reconstruct where the neutrino came from and the path it took by reconstructing the blips in each of the spheres.

“If we observed a neutrino [source] in the sky, we’re talking about a whole new field of research,” said De Jong. “For me it would be heaven.”

The group is building off of information that physicists have learned from the smaller ANTARES detector, another neutrino telescope in the Mediterranean. The KM3NeT group has spent 31 million euro so far; completing the whole telescope will cost another 95 million euro. The full telescope may be completed by 2020, according to the most recent paper published in the Journal of Physics G: Nuclear and Particle Physics.

Other physicists look forward to the experiment. “They’re in an excellent place,” said Barry Holstein, editor of the Journal of Physics G and theoretical physicist. “I think it’s a great idea and I look forward to seeing what they’re able to produce.”