Sperm whale clans tell each other apart by their accents 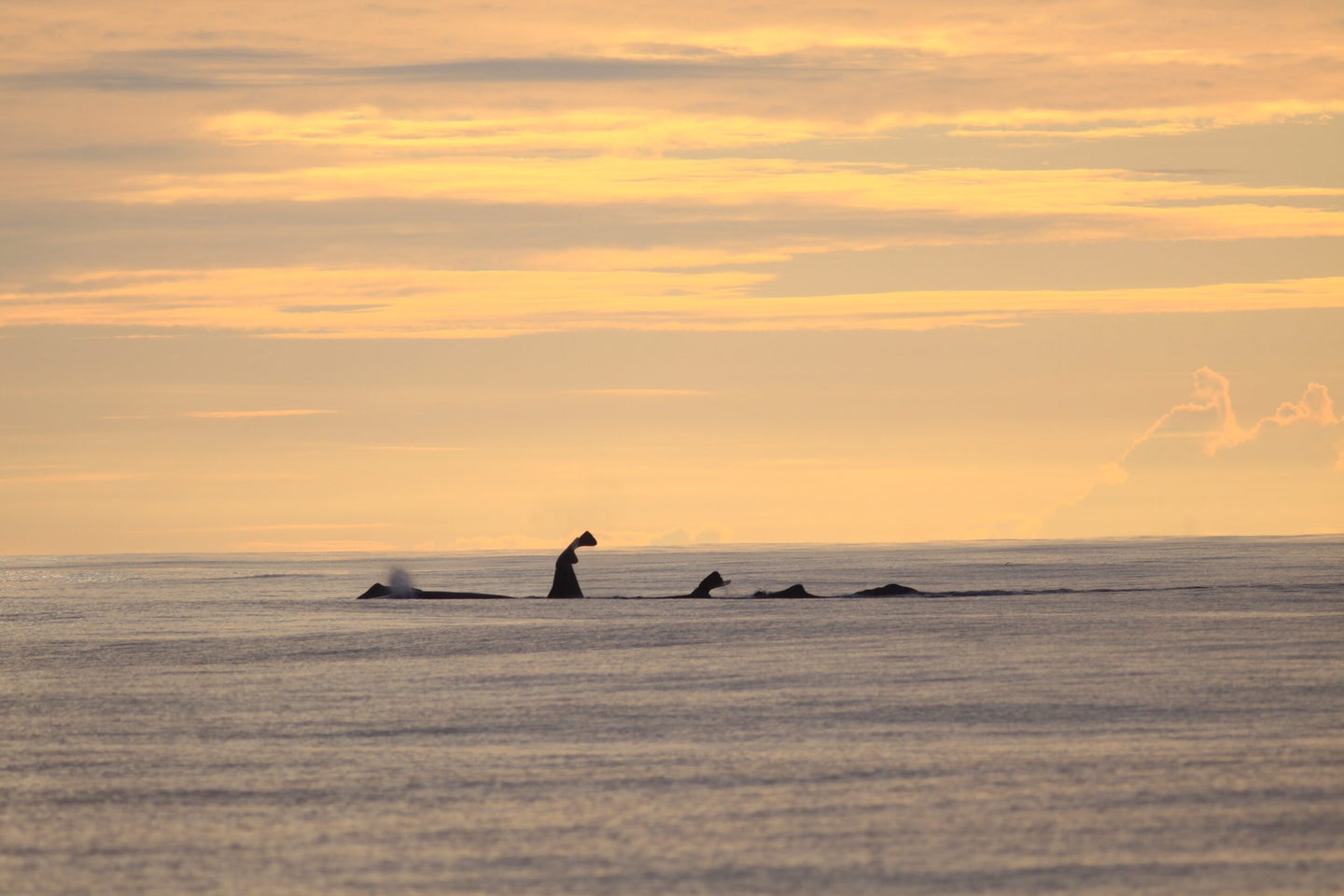 A group of sperm whales, seen from the side, begin their deep-water foraging dives as the sun sets off the Galápagos Islands. Maurício Cantor
SHARE

Sperm whales have a culture that spans the Pacific Ocean.

In a new study published this week in the journal Proceedings of the National Academy of Science, a team of linguists and marine biologists mapped how those sperm whales identify themselves with songs, called codas, learned from their family groups.

Each identifying song is linked to “differences between those groups in how they move, forage, and associate,” says study author Taylor Hersh, a bioacoustician at the Max Planck Institute for Psycholinguistics in the Netherlands. And in a parallel to human language, neighboring clans distinguish themselves with markedly different codas.

Sperm whales spend much of their lives in the deep ocean, hunting alone in the pitch black for giant squid and other sea creatures. But between dives, they hang out in small social groups of between three and 15. Sometimes many small groups of sperm whales, who are more closely related to dolphins and orcas than baleen whales, will splash around at the surface for hours at a time, rubbing fins and slapping the water with their tails. In other groups, mothers will collectively nurse young. Still others have their own hunting patterns—sperm whales around Alaska have learned to strip fishing lines of their catch, and have taught their friends to do the same.

In the Pacific, all that socializing happens within a larger cultural group of up to thousands of animals, called a clan. “Whales from different cultural groups never interact,” Hersh says. “That suggests they have some way of knowing, this is my group, and that’s a different group.” That’s a facet of human culture that’s rarely seen among animals: Culture as a tool not just for sharing information or behaviors, but for delineating social groups. Those who study social animals call this “symbolic culture.”

Human language is symbolic. “There is no connection between the word red and the actual color red,” says Gašper Beguš, a linguist at the University of California, Berkeley who is a member of the Cetacean Translation Initiative, a global project to understand how sperm whales communicate. (Beguš wasn’t involved in the paper, but works with the co-authors.) This study addresses a key question for studies of animal culture, he adds: “Can animals operate with symbols, and can they use symbols in a cultural way?”

Previous work had shown that clans often shared a characteristic set of clicks, or codas, that they sing when surfacing from a hunt or playing. “Saying that codas are a form of culture is not new,” Hersh points out. So the team set out to map those codas across the entirety of the Pacific Ocean. Using a method Hersh had developed, they sorted through those calls for codas shared by many groups of whales, and those used only by certain clans.

[Related: Baleen whales have an ‘oral plug’ to help them guzzle down food without choking]

They found seven different clans spread across the entirety of the Pacific Ocean. The scientists named each clan after a feature of its coda: Regular, Four-plus, Short, Palindrome, Rapid Increasing, Plus-one, and Slow Increasing. Some clans had small ranges, hanging out mostly around Japan and Nauru, or off the west coast of South America. One, the short clan, ranged from Alaska to New Zealand.

Most of the codas sperm whales sing are the same from clan to clan. “I believe all sperm whales speak the same language, if we’re going to make that comparison,” Hersh says. “What we’re seeing are reminiscent of dialects or accents.”

The “accents” differ the most in the places where multiple clans hunt alongside each other, like the Galapagos Islands or the rich, cold water off of Northern Chile. And that’s a phenomenon anthropologists have noticed while studying human culture. Beguš says it reminds him of a famous study from Martha’s Vineyard, which compared how islanders and tourists spoke to each other. When islanders spoke to tourists, they used a thicker accent than when speaking to other islanders—“using subtle phonetic clues to signal group identity,” as Beguš says.

“In humans, as two cultural groups become more overlapped, they find ways to emphasize their symbolic markers,” Hersh says. “And the neat thing with the sperm whales is: we see the same trend you would with humans.”

It’s possible that other parts of the sperm whale vocal repertoire also carry social information. Research led by one of the new paper’s co-authors has shown multi-level relationships between sperm whales in the Caribbean, with smaller cliques and one-on-one friendships forming within clans. And how males fit into the picture is unclear—the clans are mostly females and young whales. Adult males are transient and quiet, so they might belong to ocean-wide clan networks. Or they might live outside the social system.

And just because sperm whale codas have human parallels doesn’t make them less mysterious. “It doesn’t necessarily lead to the conclusion that they have complex meaning,” Beguš says. “But we think that there are things going on besides social signaling.”

Understanding how those clans are structured globally should change how humans think about protecting the species, Hersh says. Clans have different needs and face different problems. Hersh says that one clan living off of the Galapagos tends to thrive in El Niño years, while another does better in La Niña, probably because of how they hunt in the deep ocean. They might all belong to the same species, but they’re not the same whales.