The Pentagon says climate change is an "existential threat." It's also among the world's largest emitters. 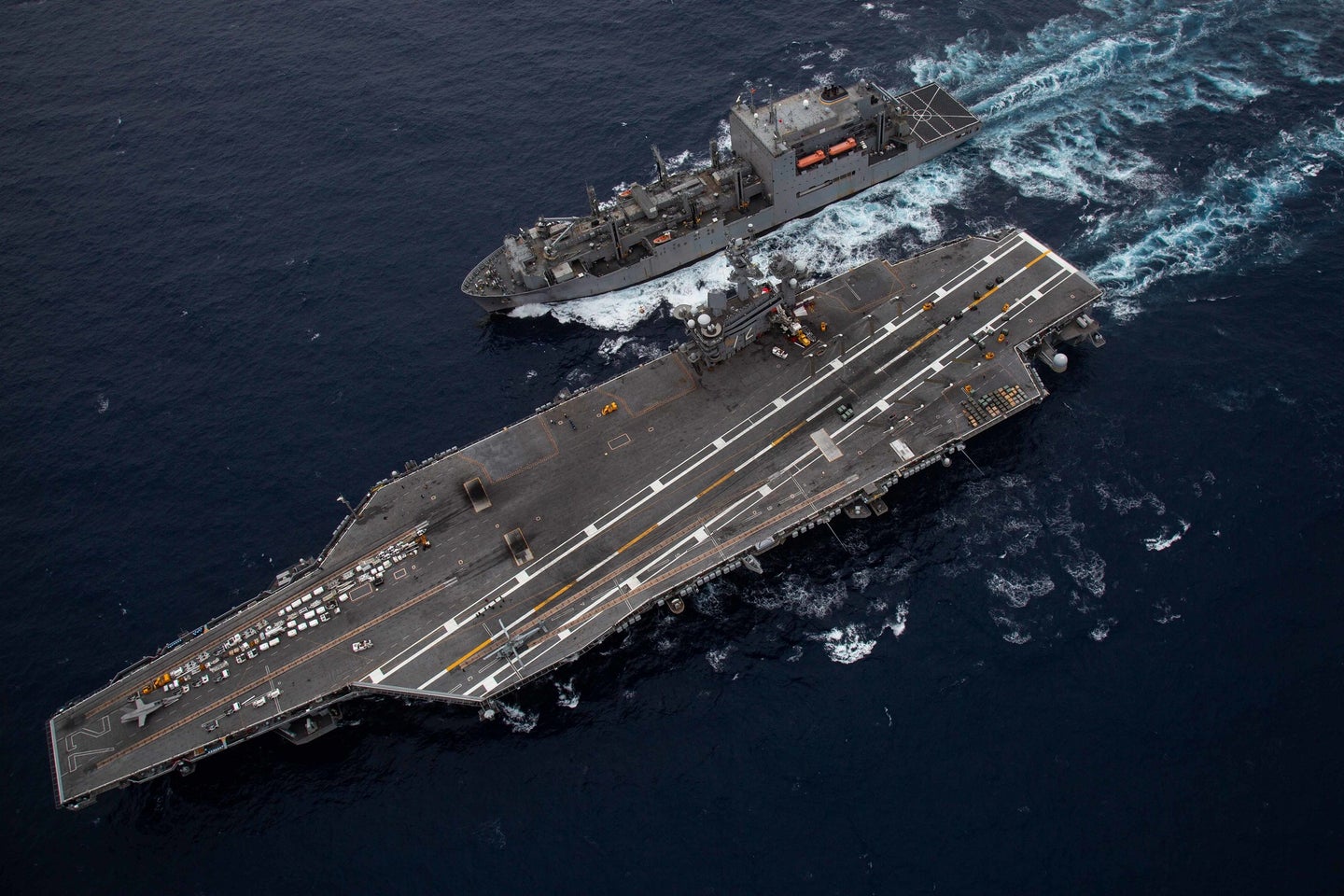 Anny Oberlink is a student at the Craig Newmark Graduate School of Journalism at the City University of New York. This story originally featured on Nexus Media News, a nonprofit climate change news service.

The US military has recognized climate change as an “existential” threat to national security, spurring conflict and mass migration. In October, as part of a government-wide effort to assess climate risk, it released an adaptation plan that, among other things, examines what it will mean to operate in a hotter Middle East and a melting Arctic.

But critics say it hasn’t done enough to stave off climate change—and that’s partly because it’s not required to share how much it pollutes. The US military is the single largest institutional source of greenhouse gas emissions in the world, according to Brown University’s Costs of War Project. (This is despite reducing emissions from a peak of around 85 million tons in 2004.)

But, as researchers and activists in Glasgow for the U.N. climate summit noted last week, governments aren’t required to report on their militaries’ emissions. That’s because a loophole in the Paris Agreement gives governments discretion to report on emissions. Before that, the Kyoto Protocol, under pressure from the US government, exempted militaries from setting emissions targets.

“We can’t keep treating the military in some kind of special way. It’s just another highly polluting sector,” said Doug Weir, research and policy director of the UK-based Conflict and Environment Observatory. “They’re way behind on their shift towards carbon neutrality, because they’ve enjoyed this kind of exceptionalism for so long.”

The Conflict and Environment Observatory launched a petition earlier this year that calls on militaries to enact more transparent reporting mechanisms and countries to set meaningful targets. More than 100 international organizations, including Amnesty International, have signed the petition. Peace groups like World Beyond War and CODEPINK are circulating similar demands.

“If you situate the COP within the last 12 months, the difference in how this issue of measuring emissions is being addressed by not only militaries, but also by the media as well, it’s a complete sea change,” Weir said.

Some of those calling for change are US veterans.

James Rine enlisted in the military after college and was stationed in West Germany during the early 1970s. He later went back to school, earned a PhD in geology and spent the next several decades studying climate change.

He joined Veterans for Peace in 2005 over his opposition to the Iraq war, but it was only recently that he began to connect his time in the military with his concern over climate change. “Eventually, people are going to [realize] we can’t fight climate change and have this big military,” he said.

The world’s militaries are responsible for about 6 percent of global greenhouse gas emissions, according to Scientists for Global Responsibility (SGR). The US military, with a $760 billion budget for 2022, leads the pack in emissions. The Costs of War Project estimated it emitted 51 million tons of carbon dioxide in 2020—more than the emissions of most countries. The bulk of those emissions come from fuel use and maintaining more than half a million buildings.

Those figures are just an estimate based on publicly available data from the Department of Energy and bulk fuel purchase records. They indicate the largest shares of military emissions come from fuel and powering facilities, according to Brown University’s analysis. (SGR’s analysis, which it presented in Glasgow last week, extrapolated from UK data and included indirect “value-chain” emissions, putting that figure significantly higher, at 205 million tons.)

The Defense Department does not regularly report its contributions to climate change, although that may change. This year’s budget called for the Pentagon to report on the past ten years of greenhouse gas emissions. The department missed its July deadline.

“In a democracy, we should have information with which to make informed decisions,” said Neta Crawford, a political scientist at Boston University and author of the Costs of War report. “It is the practice of holding an institution to account and making it possible for public policymakers and interested individuals to come up with ideas which could feed into a better outcome.”

She said the military, which has reduced emissions over the last 17 years, could make further cuts by continuing to wean off coal, closing underutilized facilities, and rethinking some US operations.

“​​Look at the central command—do we need an aircraft carrier there 24/7, 12 months a year?” she said. “You could go through the commands and their exercises and ask yourself, ‘what can be reduced or eliminated entirely and still be secure?’”

In remarks at Wayne State University in Detroit in November, Deputy Secretary of Defense Kathleen Hicks said the White House set a goal for the DoD to reach net-zero greenhouse gas emissions by 2050, and that the Pentagon was developing a sustainability plan that would reduce emissions and focus on developing “a zero-emissions, non-tactical vehicle fleet.” She added, “We also know that we need to optimize energy use in our tactical vehicles.”

Also in November, Rep. Barbara Lee (D–Calif.) introduced a resolution calling on the defense department to release a report on its emissions, set “clear,” annual emissions reduction targets, and commit to “strict, transparent, and independently verified reporting” of emissions. The resolution, which is endorsed by progressive lawmakers and groups like Rine’s Veterans for Peace, also supports the House version of the National Defense Authorization for 2022 that calls for the Defense Department to reduce greenhouse gases consistent with 1.5 degree Celsius targets.

NATO, the world’s largest security alliance, has also signaled that it is taking climate change more seriously. Last week it sent its leader, Secretary General Jens Stoltenberg, to the UN Climate Conference for the first time in the conference’s 26 year history. At a summit in June, NATO leaders discussed setting a target of net zero emissions for armed forces by 2050 and invited Stoltenberg to “assess the feasibility” of reaching that goal. NATO also published its first climate change and security action plan in June.

Weir said that while it’s important that the Pentagon and NATO prepare for the risks of climate change, these plans cannot substitute serious commitments to cutting emissions—and increasing transparency. “Until there’s scrutiny of what’s being emitted, then there’s going to be no political pressure or social pressure on [world leaders] to actually change and move towards meaningful cuts,” he said.

Recently, Weir and his colleagues launched militaryemissions.org, a tool that aggregates the voluntary emission reports from the world’s armed forces. Weir said its aim is to highlight just how little is disclosed about military emissions—and pressure governments to become more transparent.

Richard Kidd, the Deputy Assistant Secretary of Defense for Environment & Energy Resilience, wrote in an email to Nexus Media News that the Defense Department was committed to reducing emissions from utilities, buildings, non-tactical vehicles and power generation, and that it would work to increase the energy efficiency of operational platforms.

But, he added, “The Department opposes any notion of fuel ‘rationing’ in combat operations—such a notion is unenforceable, and no nation is going to save fuel in order to lose a war.”