Watch bobcats, bears, and even birds use fallen logs as bridges 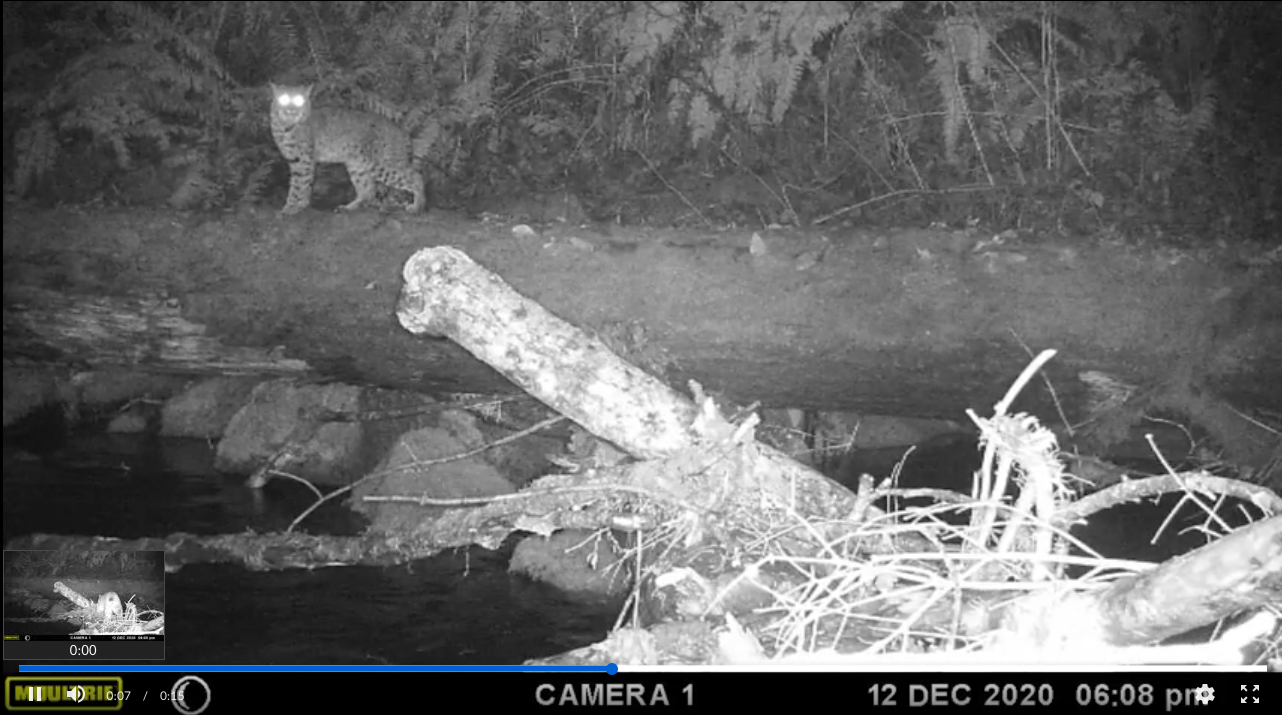 A bobcat gets ready to walk across a log jam in Oregon. Courtesy Ezmie Trevarrow and Ivan Arismendi
SHARE

For animals living in the woods of western Oregon, a log across a stream can act like Main Street. Videos captured by a pair of ecologists at Oregon State University (OSU), published earlier this month in the journal Biodiversity and Conservation, show dozens of species using logs from a stream-restoration project to eat, preen, and walk.

“We think this is a hidden role of large wood,” says Ivan Arismendi, a stream ecologist at OSU and a coauthor on the study. “Everybody that will need to cross will use them, so it creates a concentration of animals.”

The rivers of North America were once full of naturally downed trees. A log jam in Bellingham, Washington, removed by colonists in 1877, was three-quarters of a mile long, and was so ancient that trees grew on top of the fallen wood. For close to a hundred years, timber companies, landowners, and even the Army Corps of Engineers pulled logs out of rivers to speed up travel, or just because it looked messy.

But those logs also provided critical habitat for fish—particularly young salmon, which need cold, sheltered water to survive their youth. So beginning in the 1980s, land managers began placing wood back into rivers, hoping to restore some of that lost habitat.

The OSU ecologists used motion-activated cameras to watch the world above 11 restored log jams, and found that the wood serves more than just a forest’s aquatic community. Bobcats, cougars, bears, coyotes, and more all crossed the logs, and otters, kingfishers, and eagles used the space to rest and hunt.

“In ecology, we use the idea of corridors,” says Arismendi. “You have certain structures that allow animals to be connected.” Forest animals may stick to brushy streambanks to move through the plains, while natural areas might serve as corridors through farmland. And as habitat has become fragmented by roads, suburbs, and agriculture, conservationists have increasingly looked for ways to link up ecosystems.

The cameras were set up at the site of a restoration project on Rock Creek, about an hour and a half south of Portland. In 2008, the nearby city of Corvallis, Oregon, placed wooden posts in the creek to catch driftwood, creating new log jams. In the years since, those jams have grown over with a thick coat of moss, and started to trap dirt and gravel.

Between June 2020 and June 2021, the ecologists, led by Ezmie Trevarrow, an OSU undergraduate who is now at the University of Georgia, captured video of more than 2,000 animals. Of the roughly 40 species that the researchers documented, most were relatively common, if not always easy to spot. The list included raccoons, mule deer, kingfishers, and possums.

But the logs also attracted rarer species, including a golden eagle, a giant bird of prey that normally lives in dry eastern Oregon. “This is very unusual,” says Arismendi. “We consulted with some eagle experts at the US Geological Survey, and they were really excited. They were like, ‘what are they doing there?’”

Meanwhile, smaller animals, including a single mouse, used the logs even when the creek was running high enough to completely cover the log, suggesting that it served as a crossing of last resort.

“These are floating logs in high-flow river, and they just go ahead and cross there,” says Arismendi. “So one option is: They could be escaping from predators. The other option is: They may have foraging habitat on one side, and they may have a nest on the other side.” The researchers know something interesting is happening with the risky crossings, but they don’t know what.

“[The logs] can connect habitat that before was largely unconnected for many of these species,” says Arismendi. “We’re talking about really small rodents and smaller mammals that can now cross safely.”

Five decades of research on old-growth forests has demonstrated that it’s the complexity of the landscapes that makes them such rich habitats. And sometimes, that complexity comes down to something as simple as having a place to cross a river.