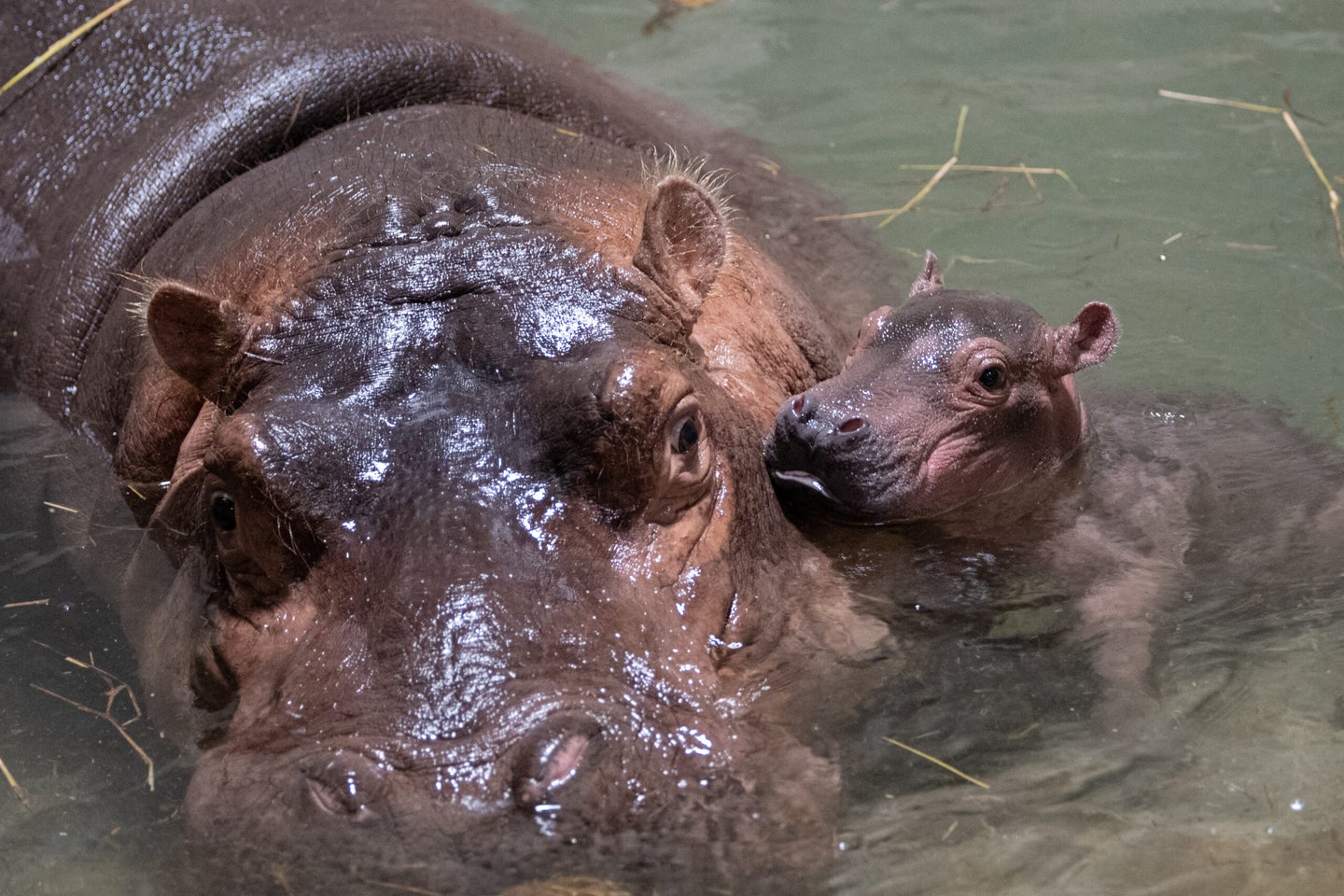 Fritz was born at a healthy weight and can already walk and swim. Cincinnati Zoo
SHARE

After more than 220,000 online votes, The Cincinnati Zoo & Botanical Garden announced the name of their newborn baby Nile hippo born on August 3—Fritz. The zoo received a stunning 90,000 name suggestions from every state in the United States and 60 countries in only two days, but Fritz received 56 percent of the vote tally over second-choice Ferguson. He joins his big sister/viral sensation Fiona, dad Tucker, and mom Bibi at the southwestern Ohio zoo.

“We would have been happy with either name, but we really think the name Fritz fits this spunky little guy’s personality,” said Cincinnati Zoo’s head hippo keeper Wendy Rice in a press release. “We also thought it was funny that it was suggested because ‘Fritz’ is here due to Bibi’s birth control being ‘on the fritz’.”

Earlier in 2021, Bibi and Tucker received a breeding recommendation from the Association of Zoos and Aquariums (AZA) Species Survival Plan (SSP) Program. The group manages the health and genetic diversity in the hippopotamus population in North American zoos, according to zoo officials.

“We weren’t planning to welcome a baby this soon, but nature found a way and ignored our calendar,” said Cincinnati Zoo’s director of animal care, Christina Gorsuch, in April when Bibi’s pregnancy was announced. “Most forms of contraception, in hippos or humans, (are) not 100 percent reliable. The dose that was previously effective for Bibi did not prevent pregnancy this time.”

From the beginning of Bibi’s pregnancy, zoo staff did everything they could to ensure a full-term pregnancy. She received everything from hormone supplements, to regular ultrasounds to monitor Fritz’ growth and development to a 24-hour surveillance beginning in July.

His big sister Fiona is considered “hand-raised” because she was born six weeks premature on January 24, 2017 and needed additional human care to survive. Baby hippos typically weigh about 100 pounds at birth, but the tiny Fiona clocked in at only 29 pounds. She is the smallest known hippo to survive such a low birth weight and weighs a respectable 2,000 pounds as of July. As she grew, Fiona took social media and the real world by storm: she photobombed an engagement shoot, had a local ice cream named in her honor, and even starred in her own reality-TV series appropriately called “The Fiona Show.”

The zoo previously reveled the Fritz’s sex on August 8th. “We’re just happy that the calf is healthy. The sex didn’t matter much to the hippo team, but it will be interesting to observe and compare the behavioral differences between a hand-raised girl and a mom-raised boy,” said Cincinnati Zoo’s director of animal care, Christina Gorsuch via press release. “Will this calf be as comfortable with humans as Fiona is? Will he be less independent? Will he love cameras?”

Whether he will be a social media star is still up in the air, but Fritz is already showing signs that Fiona’s trademark hippo “ear wiggle” runs in the family. The ear wiggle is functional and adorable—it helps them remove excess water after swimming.

Fritz is currently bonding with his mom, away from the public eye for at least another week. Hippo enthusiasts can still visit to see Fiona and her dad Tucker at Hippo Cove’s outdoor enclosure.