Why wildfires are suddenly ravaging the Southeast

Get used to fires in the Great Smoky Mountains 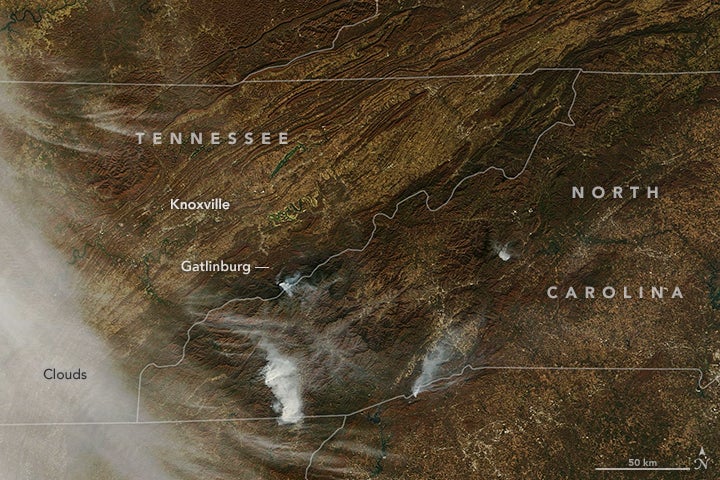 On Sunday, a NASA satellite caught a hypnotic image of wildfire smoke threading its way up from the Great Smoky Mountains in Tennessee and North Carolina. The sight of wildfires raging throughout the Southeast is news for some, but for the region it’s confirmation of what locals have been going through for weeks. Since October, more than 150,000 acres have burned throughout Appalachia. But why?

The humid Southeast isn’t supposed to be prime fire territory. “Wildfires in the southeastern United States are usually small and do not produce much smoke,” writes NASA’s Earth Observatory, which has been publishing images of the fire all month. But these fires are something else entirely: Reports of unprecedented, raging blazes in places like Gatlinburg, Tennessee, are nothing short of terrifying.

A combination of drought and climate variability appears to be to blame. Since the 1970s, writes the Southeast Regional Climate Center, the region’s average temperatures have steadily increased, in part due to rising populations and human development in the region. This year, scores of weather stations throughout the South recorded record-breaking temperatures. Adding a huge drought and high-speed winds to the mix has made the region particularly vulnerable to fire.

“The fall is typically a dry period of the year [in the region], but the dryness extended back into parts of the wetter summer period as well,” says Mark Svoboda, a climatologist who directs the National Drought Mitigation Center. “When the tropical storms and hurricanes failed to bring tropical moisture off of the Gulf, it just didn’t bring relief to the region.” The result, says Svoboda, has been a larger amount of dry vegetation than usual—literal tinder that’s driving the current fires.

According to the U.S. Drought Monitor, more than 41 percent of the Southeast is experiencing severe drought. More than 31 percent of drought-stricken areas are classified as “extreme”—conditions that can lead to major crop and pasture losses and widespread water shortages. That has stressed out local trees, which need more water than their Western counterparts, the National Weather Service’s fire weather program manager, Heath Hockenberry, told Yahoo! News.

The area’s record dry streak—up to 62 days without rain in some areas of Georgia and Alabama—has finally been broken by rain in some spots. And believe it or not, that isn’t necessarily good news. Tornadoes and other extreme weather has led to flood risks in areas recently ravaged by wildfire.

Even if it does rain in the region, says Svoboda, it’s not likely to solve the Southeast’s water woes. “We’ve seen early indications that you might have more rain [over time], but see more time in between rain events.” As climate change pushes record-high temperatures higher and higher and extreme weather events become more common, the conditions that support fires in the Southeast could get even worse.

With large fires currently raging in Alabama, Georgia, North Carolina, South Carolina, Tennessee, and Virginia, officials’ focus is on protecting citizens and helping vulnerable areas get back on their feet. But once the smoke clears, they’ll need to get to work preparing the area for more fires in the coming years.

There are ways to brace for future blazes: Increasing forest diversity, for example, could help reduce risk in some areas. And officials are figuring out how to train the region’s poorer communities, which are at the highest risk of forest fires, in prevention and mitigation. One thing is clear through the smoke: It’s time to plan for a future with plenty of Southern wildfires.