The little swimmers that weren't. 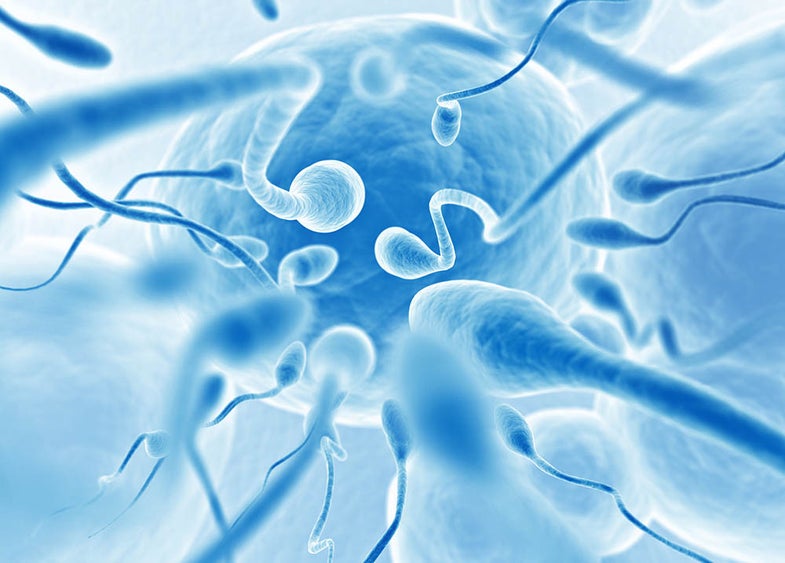 In Gilaed, the fictional nation at the heart of Margaret Atwood’s “The Handmaid’s Tale,” children are scarce. A loss of fertility brought about by some nebulous mix of environmental pollutants is to blame. In Gilaed, women are the focus of the infertility. But it’s the same in the real world. According to Hagai Levine, an epidemiologist at the Braun School of Public Health and Community Medicine at Hadassah-Hebrew University in Israel, that’s a problem.

“Because male fertility and sperm count are very susceptible to the environment, it’s a great model to study the modern environment’s impact on human health,” Levine told PopSci. Levine is the author of a study released today in the journal Human Reproduction Update that looks at how sperm counts in men have changed over time.

The way Levine frames it, understanding changes in sperm count isn’t just useful in tracking male fertility. Sperm health can also help scientists figure out whether our environment is making us sick. Sperm, it turns out, is something like a canary in a coal mine—only instead of hoping that it sings, we’re hoping that it swims. We should all find it troublesome, then, that Levine’s study found a sharp decline in male fertility in Western Nations—a region spanning North America, Europe, Australia, and New Zealand—from 1973 to 2011. Sperm counts seem to have dropped by more than 50 percent.

Levine’s study was a meta-analysis, which means he and his international team of researchers culled data from previous studies and applied a statistical analysis to draw out trends. Studies like these, where data is mined after the fact, can only show what’s happening—not why. But Levine thinks environmental factors are likely to blame, and not without reason. Studies have already shown that common hormone-disrupting chemicals like bisphenol-A (BPA) and phthalates can affect sperm count and performance. In fact, what Levine found most surprising isn’t that there was a decline, but that it doesn’t show any signs of stopping.

“We thought that maybe there would be some leveling off,” Levine says. “I mean, say we are exposed to certain chemicals or poor lifestyle. At some point it should be leveling off. And we actually see that not only is it not leveling off, but it’s become steeper.”

Data from non-Western countries (namely South America, Asia, and Sub-Saharan Africa) didn’t show an equivalent decline, though Levine is quick to point out that we should be careful about drawing easy comparisons. It’s tempting to suggest that Western culture exposes men to more harmful chemicals than typical lifestyles in the non-Western world, but this study simply isn’t capable of showing that.

“We have much less data from non-Western studies, especially in the early period,” says Levine. “And since our model requires enough data, it’s difficult to assess the trends over time in the non-Western countries.”

Research out of China suggests a more recent sperm count decline. If those results hold up, they suggest that Levine’s theory about pollution might be correct: Over the past 20 years, China has become more Western in terms of environmental pollutants and dietary habits.

This isn’t the first team to try to assess what’s happening to male fertility. But those earlier studies have been plagued by criticisms that there wasn’t enough data, or that the sampling pool was biased in some way (using data based on the evaluation of potential sperm donors, for example).

To get around this, Levine and his colleagues began their study with a literature search of two databases—PubMed/MEDLINE and EMBASE—for basically anything that contained the word “sperm” dating back to the 1980s. Because there’s a lag in time between when a study begins and when the resulting research is published, the earliest data their search yielded hearkens back to 1973. The team read through all of those abstracts (introductory summaries of a study and its findings), and if the text suggested that the study met their criteria, it moved on to full text screening.

All in all, about 2,500 studies qualified. But just 185 met their full criteria, which included things like use of a standard method of sperm collection (masturbation, if you’re curious), along with a standard method of sperm counting. Studies were also excluded if participants were selected based on some criteria that would muck up the sanctity of the data pool, like infertility concerns or genital abnormalities. In other words, they tried to find studies that included reliable sperm counts of generally healthy men. On those, they ran statistical analyses to see how the subjects changed over time. It took Levine a year of full-time research to deal with the data, and his team spent a total of four years putting it all together.

We need more research to identify specific causes—male reproduction in general is a neglected field, perhaps because medicine long focused on women as the source of most fertility problems. But at the same time, “we already know what we need to do,” says Levine. “Before we introduce new chemicals into the market, we need to properly test them and regulate their use. We need to measure their impact and eliminate use of certain chemicals that are shown to be very harmful. We need to reduce and prevent smoking, and help men trying to conceive improve their lifestyles by being more physically active, keeping normal weight, and keeping the diet healthy.”

And in the meantime, we need to figure out what other bodily functions might be under fire. Sperm may be especially sensitive to environmental contaminants, but that doesn’t mean we aren’t otherwise at risk.

“The big take away is: Houston, we have a problem,” Levine says.

*An earlier version of the story said that 105 studies met their criteria; the correct number was 185 studies. *