How to use candles and incense sustainably

From wax waste to essential oil sourcing, aromatherapy is fraught with sustainability questions. 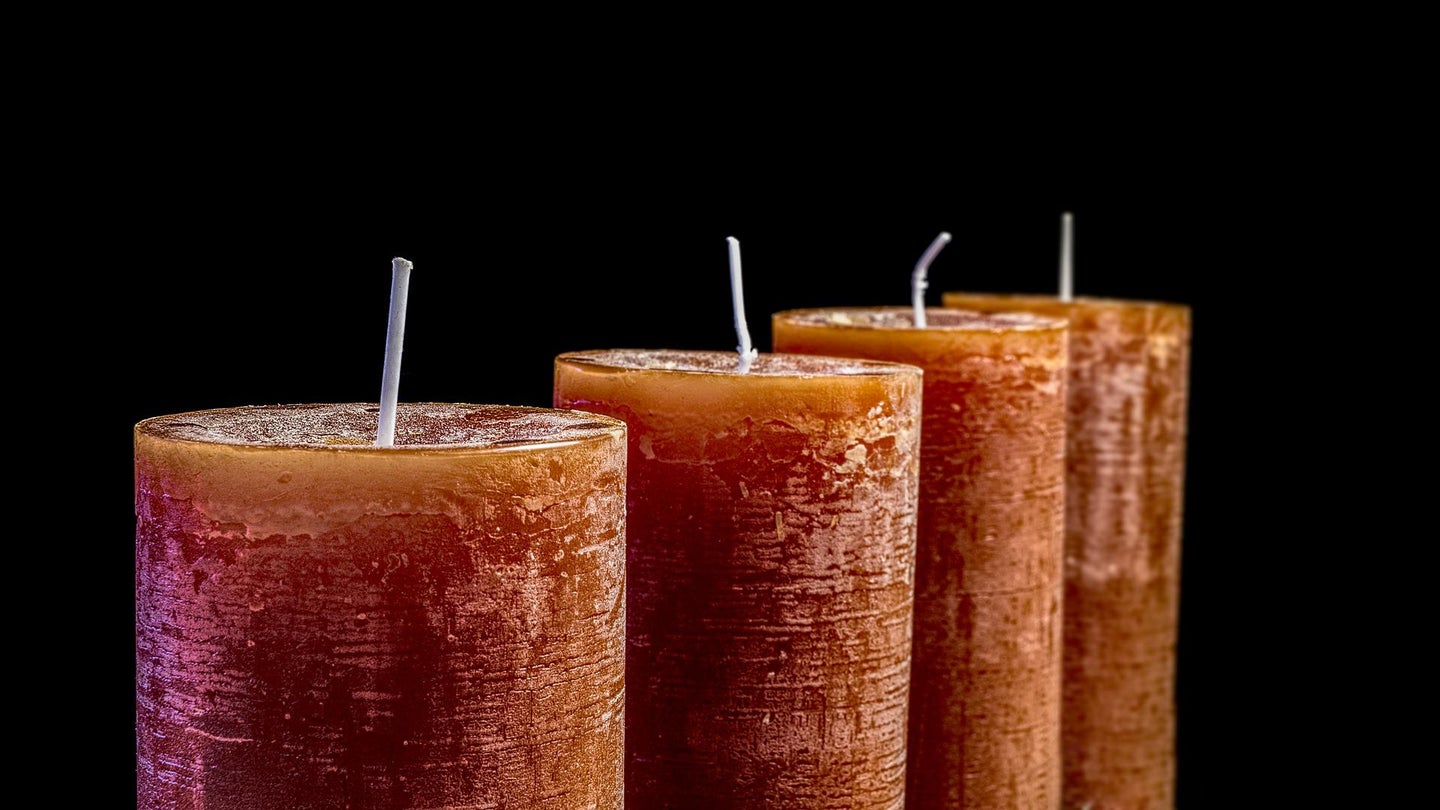 Scented candles are a popular way to help a home smell better. How sustainable is that choice?. FelixMittermeier / Pixabay
SHARE

As temperatures rise, anyone in a crowd can sniff an unfortunate fact of life: people smell. When sweat from apocrine glands mixes with bacteria on your skin, it can create unsavory smells.

Reminders of this tragic truth can come from a swarming subway car, a bustling barbeque, or even our own stuffy homes, especially as summer creeps up. This means it might be time to start breaking out our favorite smelly scents to cover up the sweaty stench of summer.

Pew Research found that most Americans are now taking action to increase their everyday sustainability, from reducing food waste to using fewer single-use plastics. But what should people do about miniature candles, incense, and essential oils to keep your home smelling fresh as a daisy? If consumers hope to stretch this sustainability to every aspect of their lives, there are several ways to combat the smells of the summer in your home.

According to the National Candle Association, the candle industry consumes over 1 billion pounds of wax in producing America’s candles every year. Soy, beeswax, and even coconut wax are found in candles, but one of the most common choices is paraffin wax. Many “clean candle” companies and health-minded consumers have noted this petroleum byproduct as a health risk. Purported risks include inhaling “toxic” chemicals released by the wax and a build-up of particulate matter in the air.

Ultimately, the science behind paraffin’s safety is not fully established, but the sustainability of the wax is questionable. Paraffin wax is a petroleum byproduct produced and refined alongside lubricating oil. Several commercial uses for paraffin can range from food packaging to pharmaceuticals. However, around 40-50 percent of the global market revenue for paraffin is from candles.

Researcher Giuseppe Suaria of Italy’s Institute of Marine Sciences studied the occurrence of petroleum waxes in the ocean in 2017 after a mass “stranding” event that left nearly 30 tons of yellow paraffin on Northern French beaches. While the term typically applies to the beaching of a live or dead marine mammal, Suaria’s study examined the stranding of massive wax spills. Similar spills have hurt fish and bird populations.

[Related: Is your wine really sustainable? Here’s how to tell.]

Paraffin wax is not usually dumped directly into the ocean by candle producers. Shipping containers wash their tanks at sea and flush wax into the ocean, which is regulated but still occurs. In 1992, one wax washed-out transport ship tat sea released nearly eight tons of wax. The following year, one report estimated that 10,000-20,000 seabirds were stranded in the North Sea after being contaminated by refined liquid paraffin. Paraffin spills have continued throughout Europe, although Suaria notes that two of the primary producers of paraffin (the US and China) have not reported wax stranding events, possibly due to a lack of incident reporting.

“I would say the majority, if not the entirety, of all of the reports I found were from Europe, and they were not from Asia or South America or North America,” Suaria says. “They are probably occurring, but they are not getting published or they don’t attract too much attention from the general public.”

Suaria hopes that further research occurs on the potential toxicity of paraffin wax to marine life. But currently, it is only known as another anthropogenic petroleum waste product in our oceans in the name of candles, alongside the estimated 14 million tons of plastic that enter the ocean each year.

“The public is still not really informed about these events. I don’t think that many people [have] heard about paraffin stranding events, or these kinds of issues,” Suaria says. “At least here in Italy, I don’t think that the general public considers the candles as dangerous, or a problematic item.”

When buying candles, there are several factors to consider, from potentially harmful fragrance ingredients to reusing the candle jar to even considering the candle’s packaging. A straightforward way to make your candles more sustainable is to avoid petroleum-based products that may end up in the ocean.

Burning incense is a practice with historical ties to several cultures and religions, from the cult of the emperor in Rome to the religious rituals of ancient Egypt. Incense comes in many forms, including cone, coil, and stick. Many stick incenses are fragrant wood sticks dipped in oils.

While many modern religions continue to utilize incense in rituals and practices, many consumers have turned to incense to freshen their homes. However, this increased popularity puts pressure on harvesters and traditional supplies of incense.

The sap of frankincense trees has long been prized for its use in incense and essential oil, and it is still harvested in the wild. However, over-harvesting of the trees has placed immense pressure on the trees, concerning many within the industry. Sandalwood trees face the same threats. The tree’s pricey wood is commonly used in aromatherapy and religious ceremonies, and the illegal sandalwood logging industry has had a deadly impact on international communities. Pressure from industry and illegal harvesting negatively impacts the native ecosystems in which frankincense and sandalwood thrive.

When shopping for incense and essential oils, consumers may want to investigate the sourcing of ingredients. Not every essential oil uses threatened fauna—eucalyptus oil, for example, can be a sustainable and lovely-smelling option. Of course, using highly concentrated oils sparingly can also help reduce how many bottles you go through.

Environmentally-minded consumers may struggle to balance sustainability with scent. But at the end of the day, petroleum-based wax, unsustainably harvested wood, and excessive packaging are the big things to avoid.