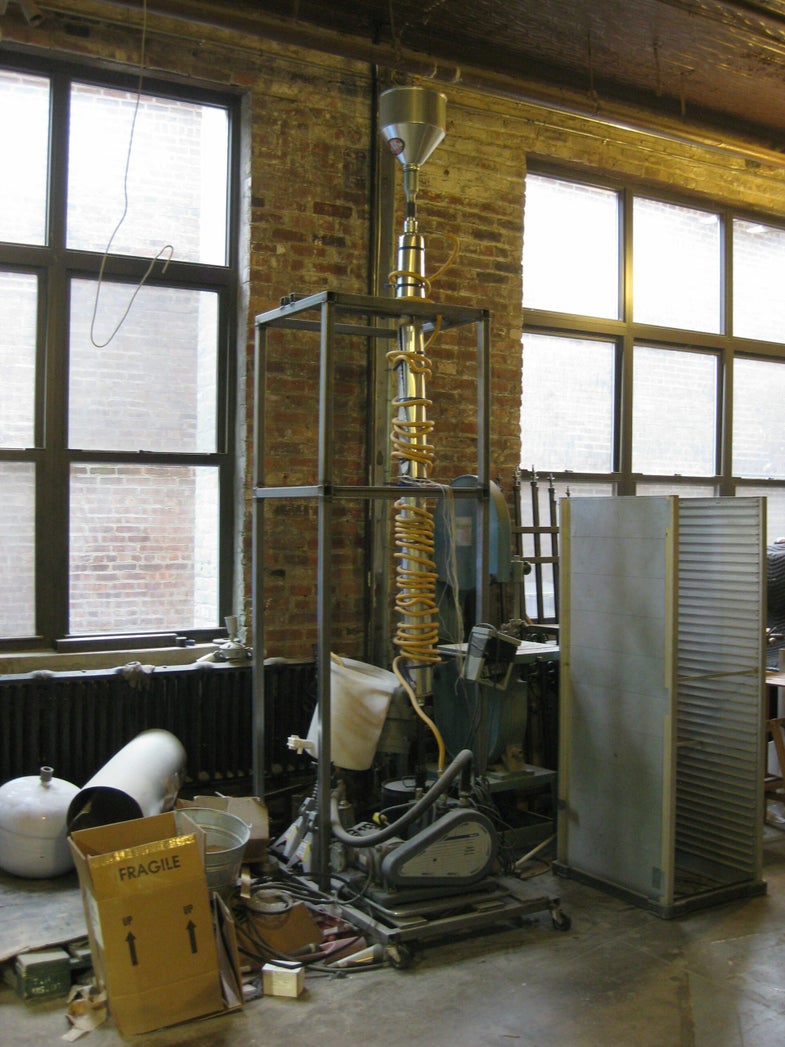 Among the hot new ideas afloat in the world of geoengineering is biochar, a form of charcoal that some say could significantly help in carbon sequestration in the future. Re:char, a fledgling company working out of a corner of a cluttered warehouse in a shared artist loft in Brooklyn, New York, is experimenting with biochar production on a very small scale.

The re:char team is developing a low-cost mobile pyrolyzer to burn agricultural biomass waste and turn it into biochar, which acts as a fertilizer, in addition to sequestering carbon dioxide. The unit also produces bio-oil, a hydrocarbon fuel that can be used as heating oil, run a diesel engine, or burned to power a microturbine and generate electricity. Technology like re:char’s may soon help small, remote farms increase crop growth, generate energy and survive off the grid in one fell swoop. Sounds great. But what does this mean and how does it work?

And what is biochar?

Biochar is made when biomass is burned in the absence of oxygen, a process called pyrolysis. The substance was first discovered in the Amazon, and it is believed that agricultural groups there used it to fertilize the rainforest’s nutrient-poor soil, somewhere between 2,500 and 6,000 years ago. Biochar is a great fertilizer, because it contains high levels of nutrients vital for plant growth, like nitrogen, phosphate, and calcium. It is also highly porous, which helps soil retain water, and provides a nice environment for various microbes that are beneficial for plant growth. And it locks carbon dioxide away, possibly for thousands of years. Any biomass can yield biochar, including wood, as well as agricultural waste like hulls and stems. The pyrolysis process also yields hydrocarbons, which can be made into fuel.

The outcome of the pyrolysis reaction depends on how much you heat the biomass. Scientists are still working out the details, but some research suggests that pyrolysis at temperatures under around 900°F cause volatile materials in the burning biomass — hydrocarbons — to remain locked in the biochar after the reaction. There are two negatives in this scenario: first, biochar that contains an abundance of hydrocarbons may actually have negative affects on soil, and second, failure to release hydrocarbons in a vapor or gas form means that you can’t make the hydrocarbons into fuel.

According to Jason Aramburu, re:char’s co-founder and technical developer, the sweet spot for making biochar falls between 900° and 1000°F. When pyrolysis is done at this temperature, it yields both biochar and hydrocarbon vapor, which can be collected and condensed into a substance called bio-oil. The oil can be dumped directly into a boiler and used for a heating system, or it can be refined to run a diesel engine (some hardy engines may even be able to run on bio-oil straight from re:char’s device). Aramburu says that the bio-oil works best in microturbines, small turbines that can run on gas or oil to generate electricity. At higher temperatures (around 1500°-1800°F), the reaction still works, but yields hydrocarbon gas instead of vapor. The gas could be used for fuel, but it isn’t as clean as the vapor and bio-oil, and requires an expensive and lengthy filtering process in order to make it into usable fuel.

The current prototype can process up to a ton of biomass per day, running full time. Half of the output is bio-oil, thirty percent is biochar, and the rest comes out as gases that are fed back through the system and react further to make more hydrocarbon vapor. According to re:char, every pound of biomass processed is able to sequester nearly four pounds of carbon dioxide.

Compared to current carbon sequestration systems, which can cost around $60 per ton of carbon dioxide captured and sequestered, re:char’s unit is far cheaper. If their unit has operating life of ten years (they’re still working out the details of this) then it will cost around two to five dollars per ton of CO2 sequestered. Another key aspect of re:char’s design is that it is mobile. Large-scale stationary pyrolyzers are already available on the market, but these are expensive and have a lot of moving parts, which means there are more places where they can break down. Biomass has to be transported to these units, rather than the other way around, which increases carbon output. As far as mobile pyrolyzers go, there are others available. But re:char’s design is currently the only small-scale mobile pyrolyzer that makes both biochar and bio-oil.

Re:char’s future goal is to manufacture its pyrolyzer for small-scale agricultural operations. The idea is simple: the operators burn waste agricultural biomass (husks, stems, etc) in a pyrolyzer. The resulting biochar is then worked back into the soil, increasing fertility and sequestering carbon dioxide from the air. The bio-oil generates electricity via a microturbine to power equipment and, potentially, nearby homes. The unit is especially promising for small farms in remote locales because it could help them generate electricity.

Early-stage projects are already underway. Researchers at the University of Michigan are working with re:char to test a prototype based on Aramburu’s design, and a working prototype on a small farm in Norfolk, Connecticut processes waste wood from trees that were destroyed in an ice storm last winter. The Brooklyn location receives several requests per week from farmers, ranchers and vineyard owners from across the U.S., as well as Mexico, Puerto Rico and Canada. These operations send in biomass samples in order to determine the quality and energy density of the biochar and bio-oil, to see if the device is a worthwhile investment for their operations. There has also been interest from groups who would like to bring the technology to the developing world.

There is an ongoing debate over whether or not biochar is a viable option for combating climate change. Some tout biochar as a miracle material that could significantly aid in carbon sequestration. Proponents include such climate science superstars as James Hansen, the head of NASA’s Goddard Institute for Space Studies and independent climate scientist James Lovelock, developer of the Gaia hypothesis. Others, however, question whether or not it makes sense to put biomass through this process, instead of using it directly as fuel or to help generate electricity, by, for example, co-feeding a coal plant. Daniel Schrag, a climate scientist at Harvard University, says that the use of biomass to make bio-oil is a reasonable approach to getting energy out of biomass for small-scale farms, but cautions against focusing on biochar as a viable carbon sequestration technique: it is hard to determine exactly how long biochar will sequester CO2.

Only time will tell how effective biochar is and whether or not bio-oil can be realistically used to generate electricity. But in the meantime, see our photo gallery of re:char’s Brooklyn prototype. 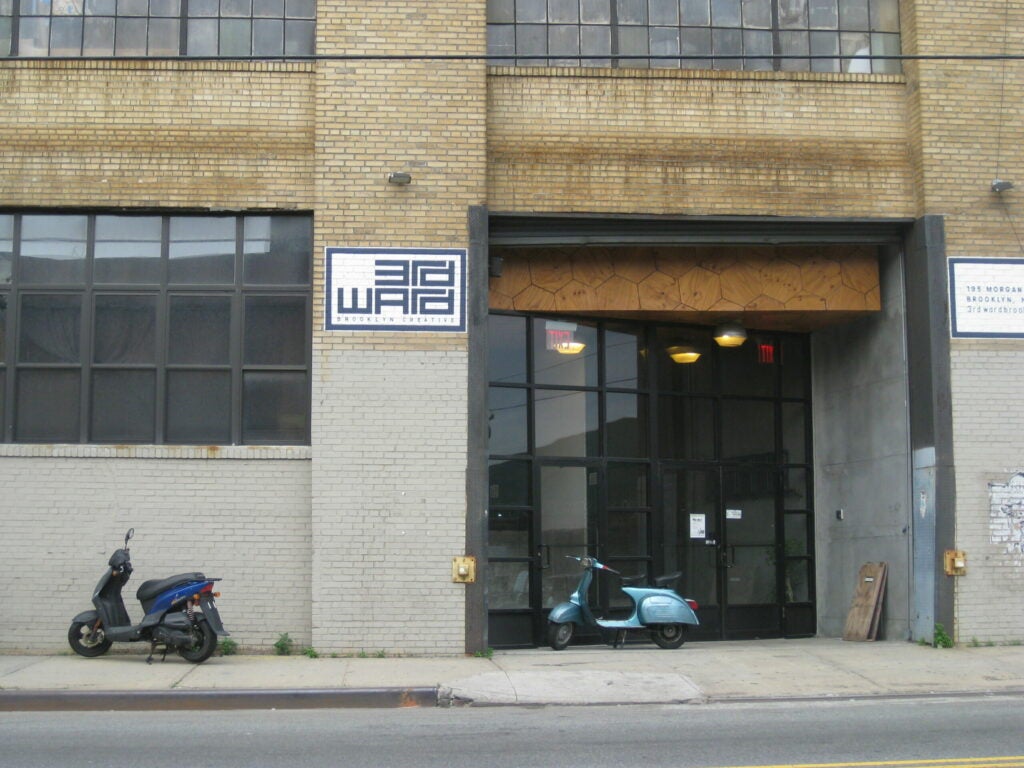 re:char’s prototype pyrolyzer is housed at 3rd Ward, an artists’ collective in the Bushwick neighborhood of Brooklyn, New York. 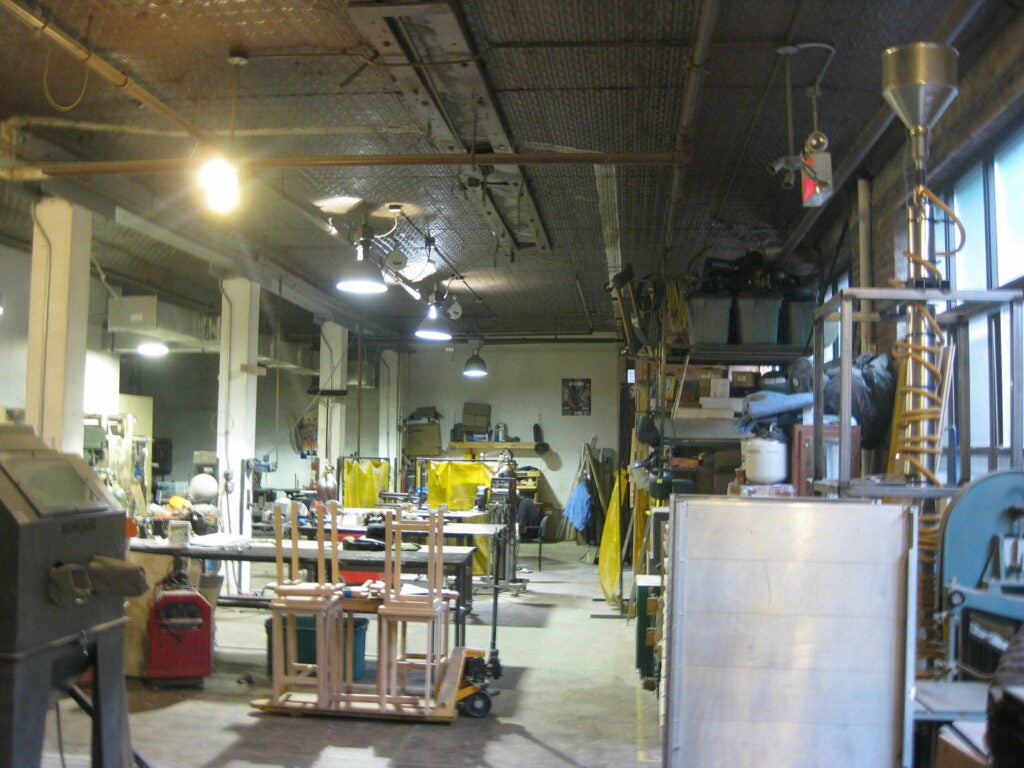 The pyrolyzer (at right, with the funnel-shaped hopper on top) sits in the wood and metal shop at 3rd Ward. 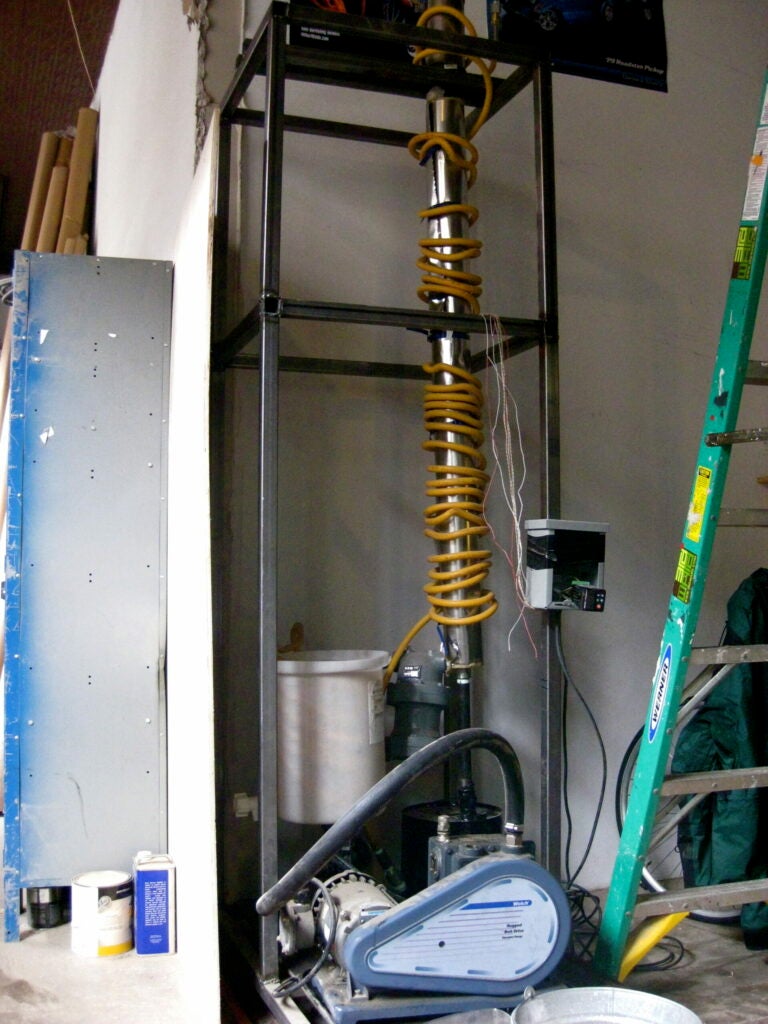 It might not look like much, but this prototype mobile biochar unit, called a pyrolyzer, could eventually help farmers in remote locales turn the waste biomass from their crops into fuel that can be converted to electricity and biochar, which will help grow future generations of crops, improve the soil, and sequester carbon dioxide. This model, designed by re:char, sits in the corner of the woodworking studio at 3rd Ward, a shared artist space in Bushwick, Brooklyn. 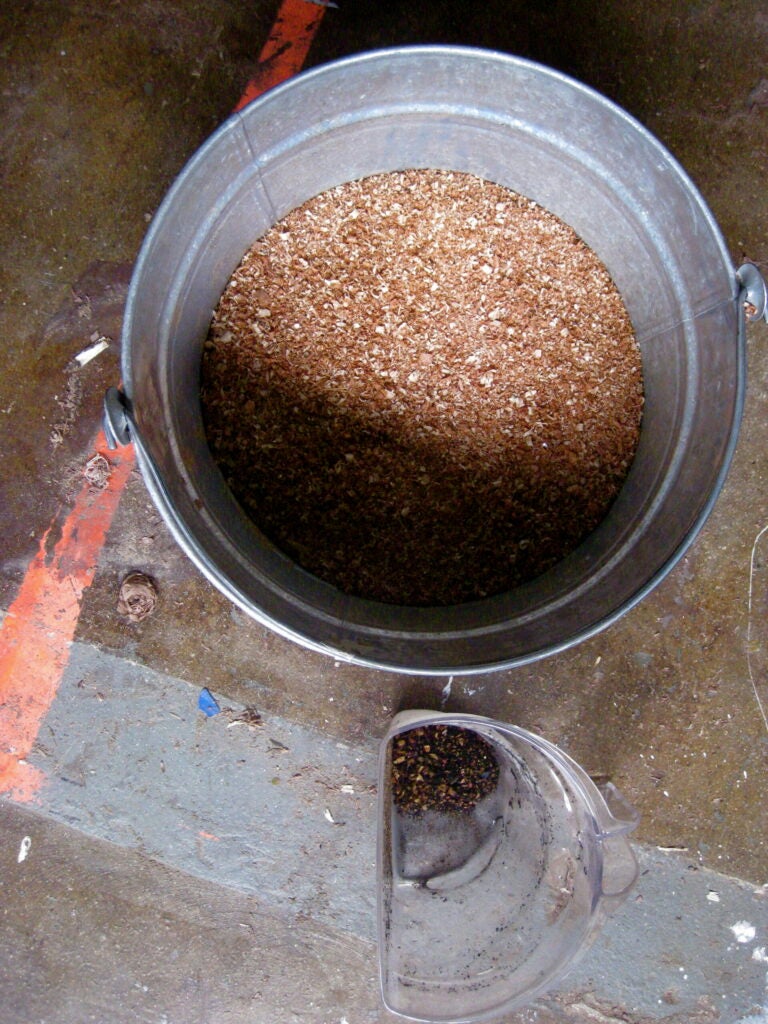 re:char is testing biomass like the sawdust in the bucket here (above) and converting it to biochar, shown in the plastic container (below). 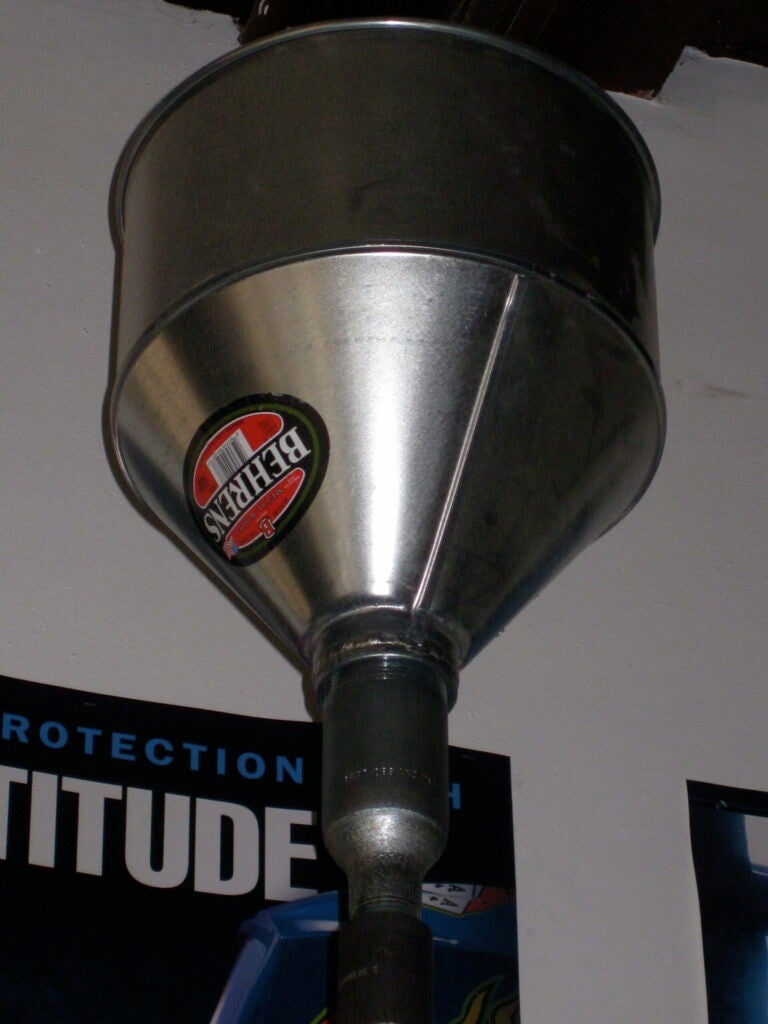 First, the biomass is dumped into the hopper, basically a large funnel that sits on top of the biochar prototype. 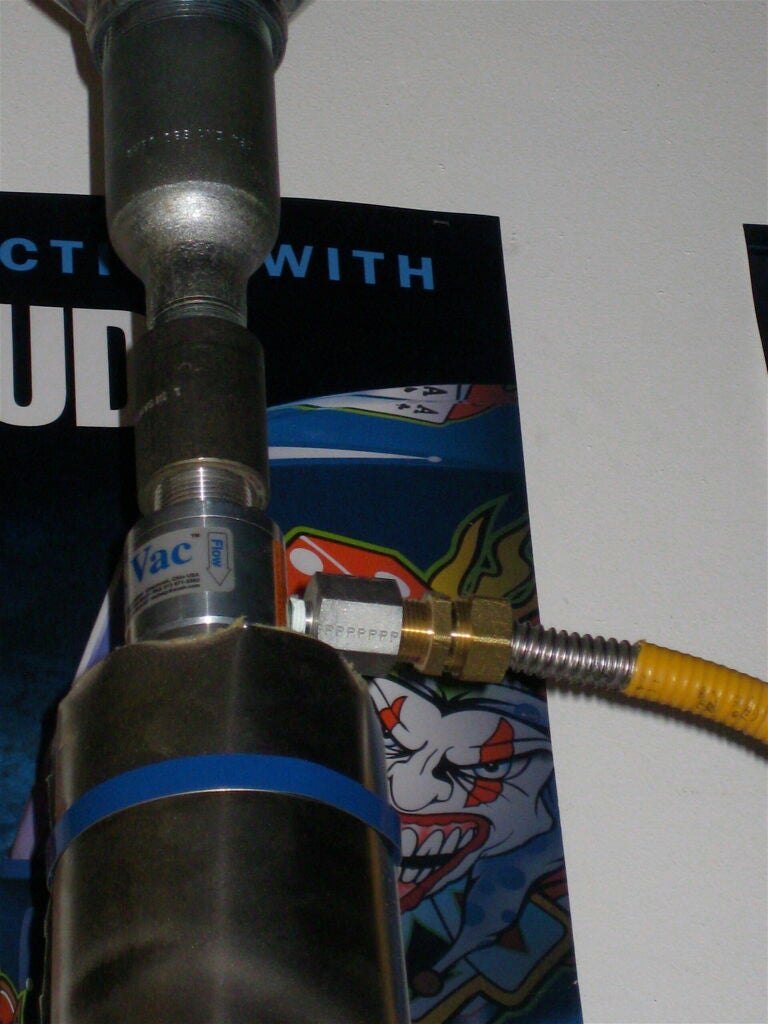 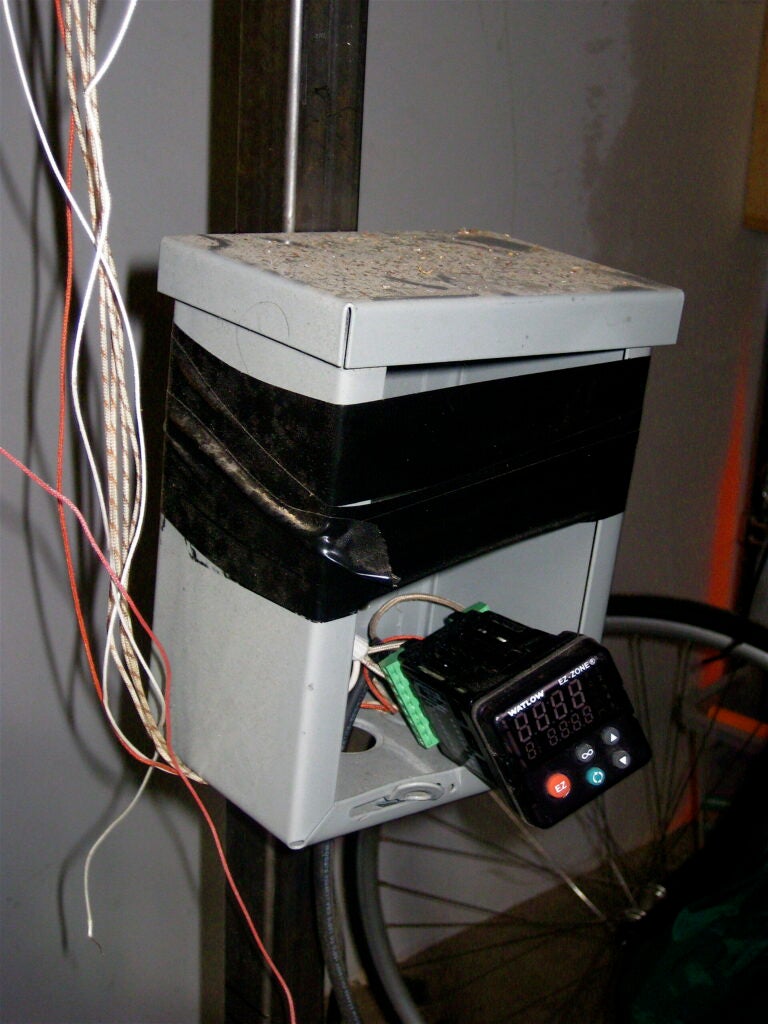 This controller — which is a lot more high-tech than it appears in this photo — controls the system’s heat. It’s connected to high-efficiency heaters that run through a vertical pipe and heat to around 1500°F, which heats the core to around 900°-1000°F. In this temperature range, the reaction produces biochar and bio-oil. The controller also turns on the system’s pump, which keeps its cycle moving. re:char plans to eventually develop a unit that can be monitored and controlled remotely. 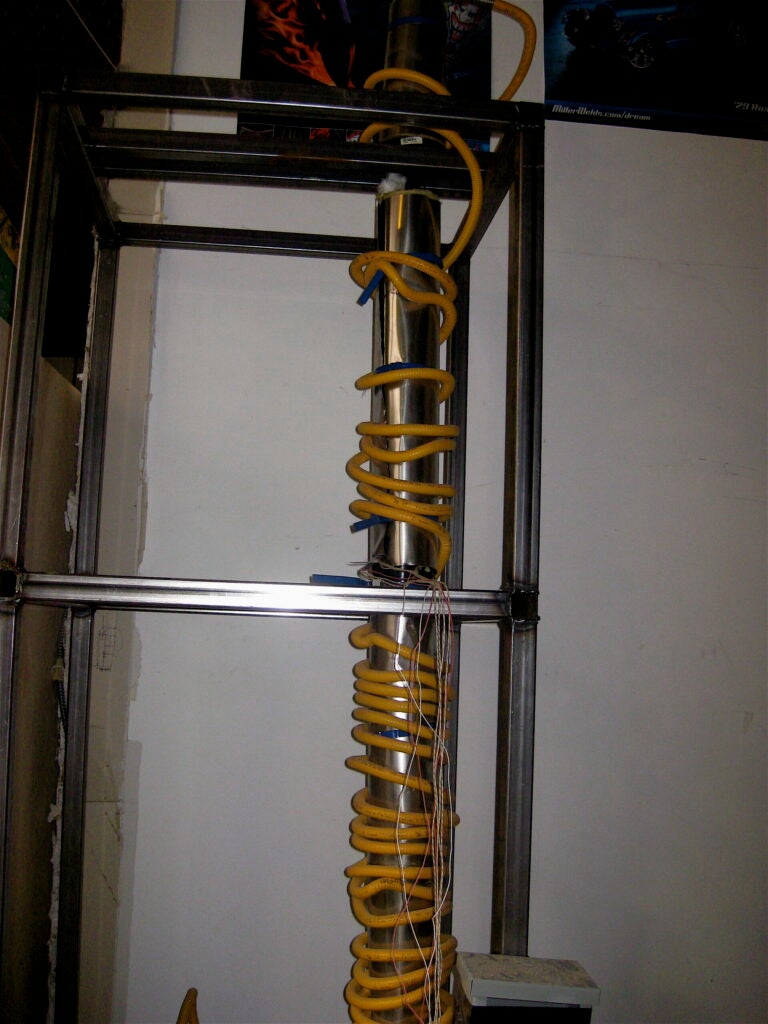 The biomass is pyrolyzed as it falls through this heated vertical pipe, the reactor core. 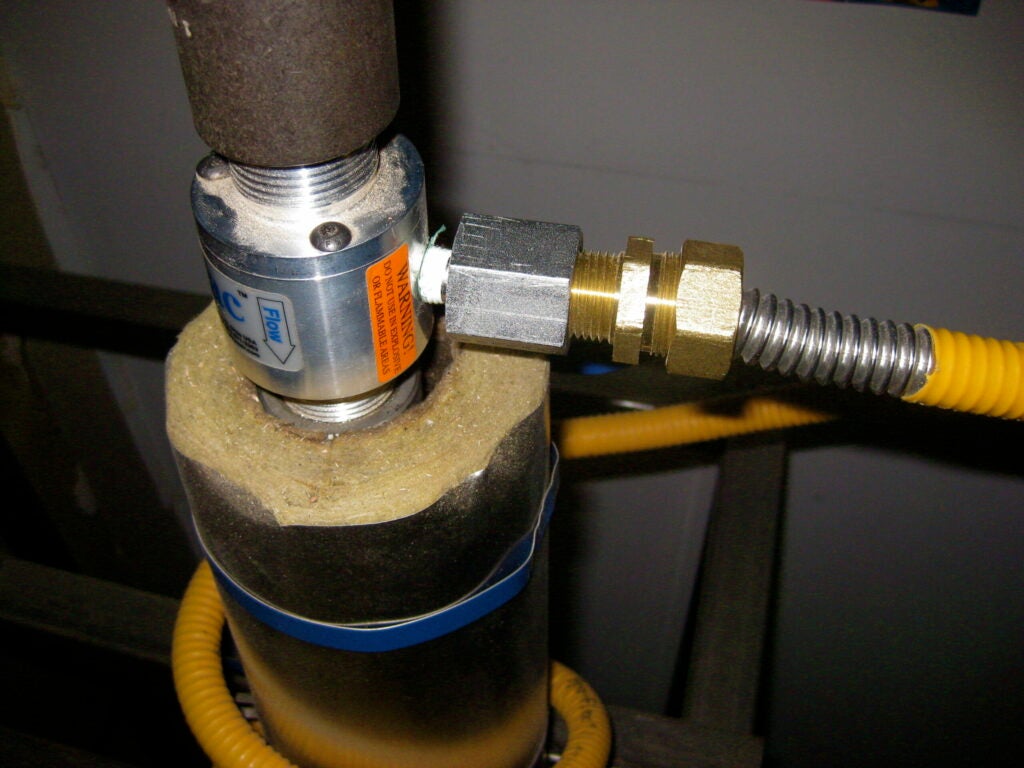 The reactor and heaters are covered with insulation to help keep the core temperature high enough for pyrolysis to take place. 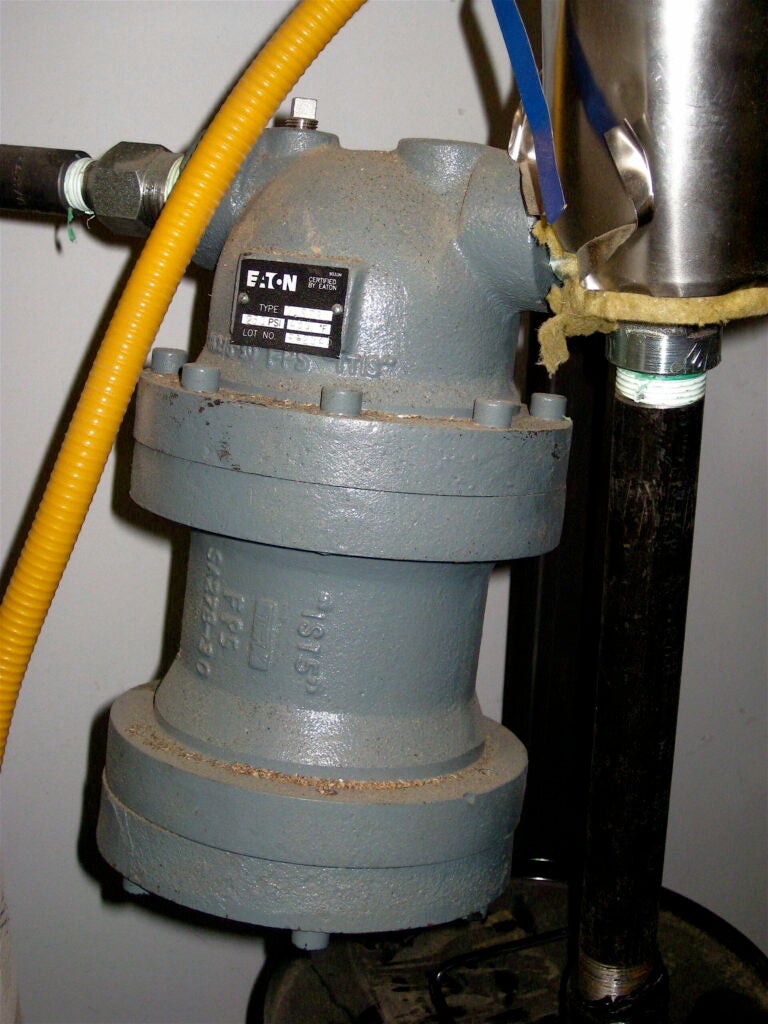 No paper or mesh filters are necessary in order to filter out the biochar. Instead, it is separated from the reaction’s vapors (which eventually are condensed to bio-oil) in the char separation system, shown here. Once this is filled up, this device is simply opened and the biochar is emptied into a storage container. In the commercial version, this process will be automated. 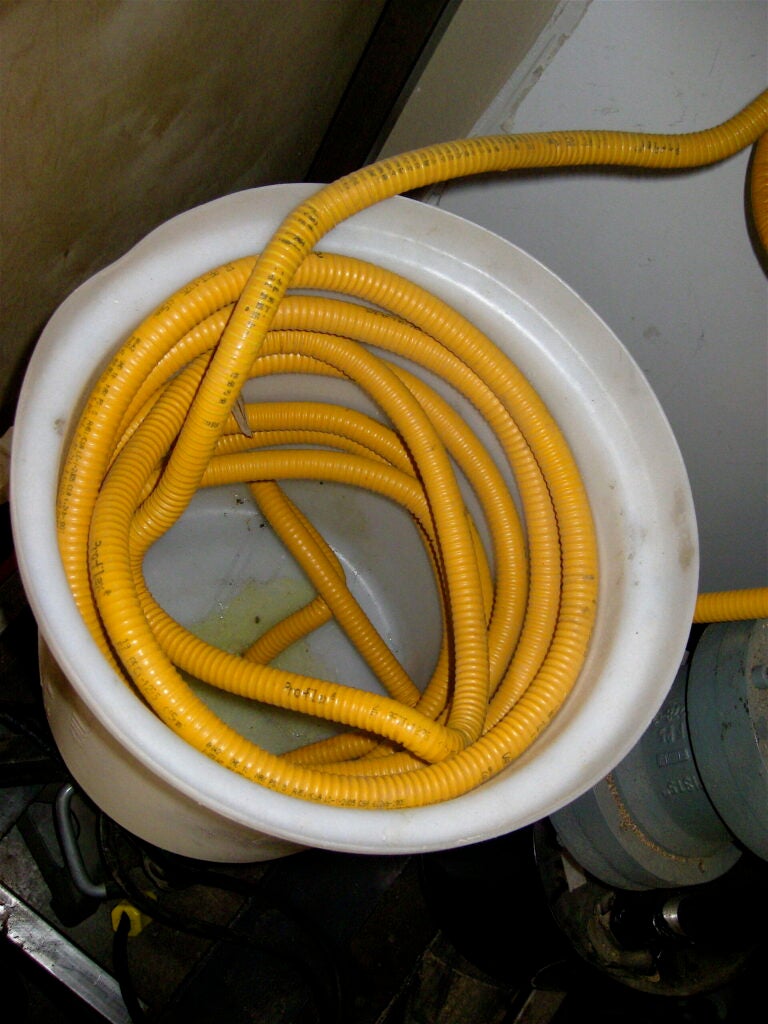 The vapor from the pyrolysis reaction is collected in 50 feet of yellow tubing, which feeds out of the char separation system. The vapor condenses to bio-oil at room temperature. Cooling the vapor faster — using ice, for example — makes the oil too thick, and it gets clogged in the tubing. 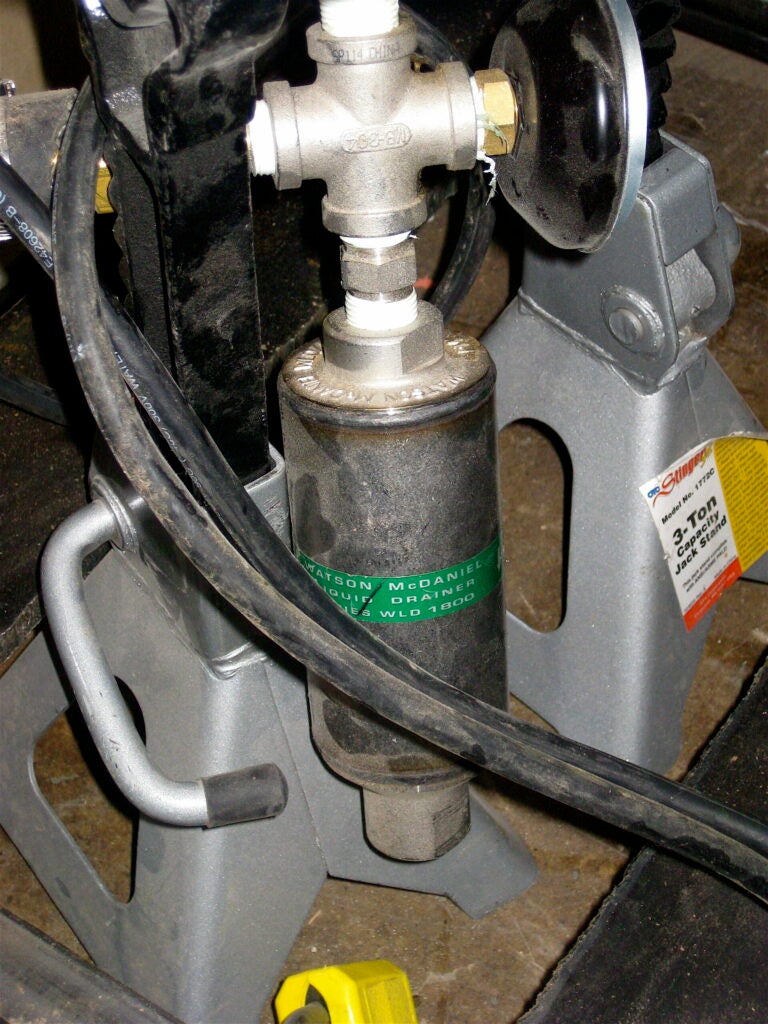 A sampling port is connected to the bottom of the white bucket that holds the yellow tubing (see previous picture), which collects the bio-oil and automatically empties it into a drip pan. Other re:char prototypes, like the Norfolk, Connecticut farm unit, use old water-cooler tanks to store the bio-oil. 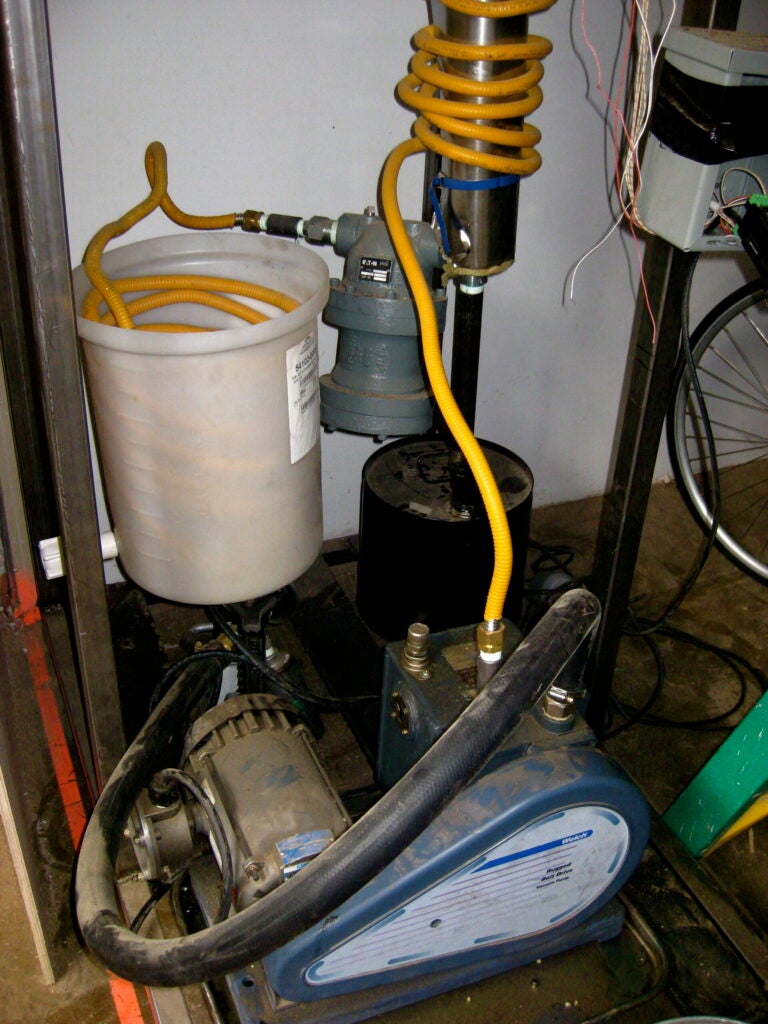 Some gas is left over after the reaction, including methane, carbon monoxide, hydrogen (less than half a percent) and some higher-level hydrocarbons. An explosion-proof pump, in the foreground here, pumps excess gas from the reaction back through the system, and pulls gas through the system, keeping the cycle moving. This particular pump was procured from the old Brooklyn Pfizer factory, which shut down in 2008.
Projects