Carve Steel with Saltwater, Electricity and a Tin Earring

Using electrochemical machining, steel can be molded with a soft, cheap piece of tin without any physical contact

The tin peace-sign earring acts as an electrode, etching away the metal in the hardened steel washer [left]. The imperfect results are due to the difficulty of manually maintaining an exact thousandths-of-an-inch distance between the two. Commercial electrochemically machined pieces, like this microturbine for a water pump, use sophisticated electronics to monitor the current flow and carve precise pieces [right]

I remember seeing a demonstration of a seemingly magic process at an engineering open house decades ago, in which a soft metal bit carved detailed shapes into far harder metals. It’s called electrochemical machining (ECM), and it’s so simple in principle that you can do it at home with a drill press, a battery charger and a pump for a garden fountain.

ECM is basically electroplating in reverse. In electroplating, you start with a solution of dissolved metal ions and run an electric current through the liquid between a positive electrode and the object you want to plate (the negative side). The ions deposit themselves as solid metal onto the surface of the object. 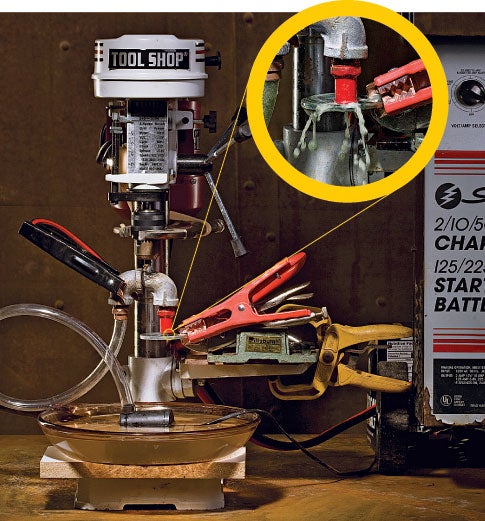 Clamps from a battery charger run about 10 amps between an electrode and the metal being machined. The flowing saltwater acts as a conductor. The drill press simply moves the electrode

In ECM you start with plain water (lightly salted to make it conductive) and run the current in reverse, so you’re turning solid metal on the piece you’re machining into dissolved ions in the saltwater, wearing it away a tiny bit at a time. The shape of the electrode determines the pattern that results.

Because it’s the electric current doing the work, the electrode never touches the other piece. And it works equally well no matter how hard the metal is. I used a cheap soft-tin earring as an electrode to machine a simple shape into a washer made of hardened steel. After about 15 minutes, the earring was still good as new, but the steel of the washer was eaten away to less than half its thickness.

This process is used industrially to create extremely delicate, detailed shapes in very hard metals. Since there is zero force exerted on the part being machined, it’s possible to make fine shapes that would break if you tried to cut them with a milling machine.

Without the precise current control of those commercial systems, my home setup produced a disappointingly blurry copy of the earring’s shape. But it’s still amazing that in a contest between a tin earring and hardened steel, the earring won.

Achtung! When your hands are wet with saltwater, even 12 volts is potentially dangerous. Wear rubber gloves.