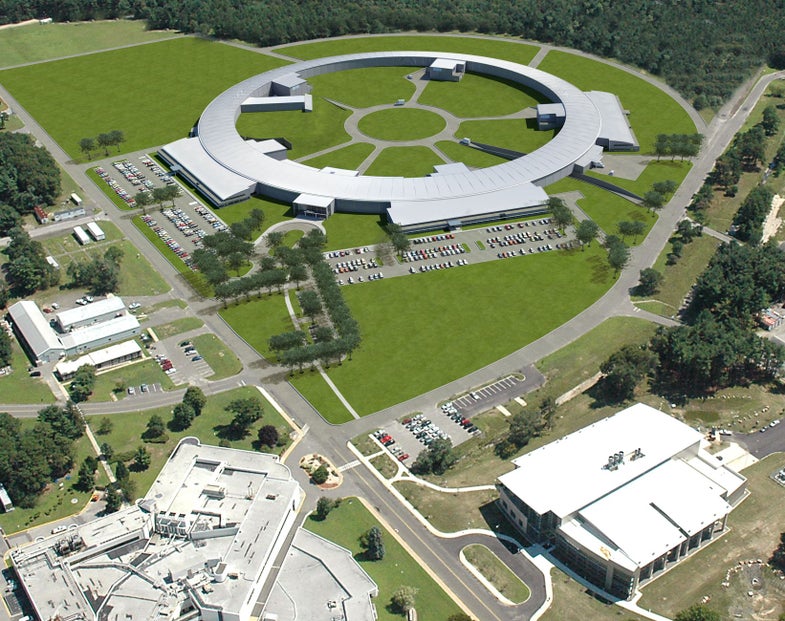 The National Synchrotron Light Source was commissioned in 1982, and it remains one of the world’s leading experimental light sources. But with so much of today’s science happening on the nano-scale, the ’80s technology doesn’t quite have the resolution to keep up. The $912 million NSLS-II, which is slated to go live in 2015 — if funding comes through — will have the most concentrated, brightest radiation beam in the world: 10,000 times brighter than its predecessor — not to mention 10 billion times brighter than the sun.

This week, I had the chance to visit the Department of Energy’s Brookhaven National Laboratory in Upton, New York, to attend the groundbreaking ceremony for the new NSLS. For those who aren’t familiar with synchrotrons, they are ring-shaped accelerators that throw off X-ray, ultraviolet, and infrared light as electrons zip around a curved path. At NSLS, that light is harnessed for extremely high-resolution imaging.

The light will allow researchers to create high-contrast X-ray images of matter at a resolution of one nanometer, the smallest scale that has ever been achieved. According to the laboratory’s press announcement, this will enable the researchers to “determine the structure and chemical properties of a single atom buried inside a material.” At that level, researchers could be looking at telltale metal ions accumulated in the post-mortem brain of an Alzheimer’s patient, or a catalyst changing crude oil into fuel. One speaker, Simon Bare, a senior research chemist from Honeywell’s UOP, an energy technology development company, said he envisions that the energy-catalysis work slated to take place in NSLS-II will one day allow for a “biomass processing route”: a complex, multi-tiered system of biofuel refining parallel to oil refining.

Brookhaven expects that 3,500 or so international scientists will conduct experiments around the clock at NSLS-II once it starts up. Much of the work will benefit the energy, biomedicine, and nanotechnology sectors, but some of the experiments are guaranteed to be off the beaten path: Current research at NSLS, for example, includes revealing original art hidden under the top layers of paintings, and imaging a 700-year-old tooth to look for calcium in fourteenth-century diets.

For now, the new accelerator isn’t much more than blueprints, a mud field, and the artist’s rendering above, but I did get some cool, gritty photos of NSLS still in action. Check ’em out, as all the guts you can see here will be hidden under concrete in NSLS-II. 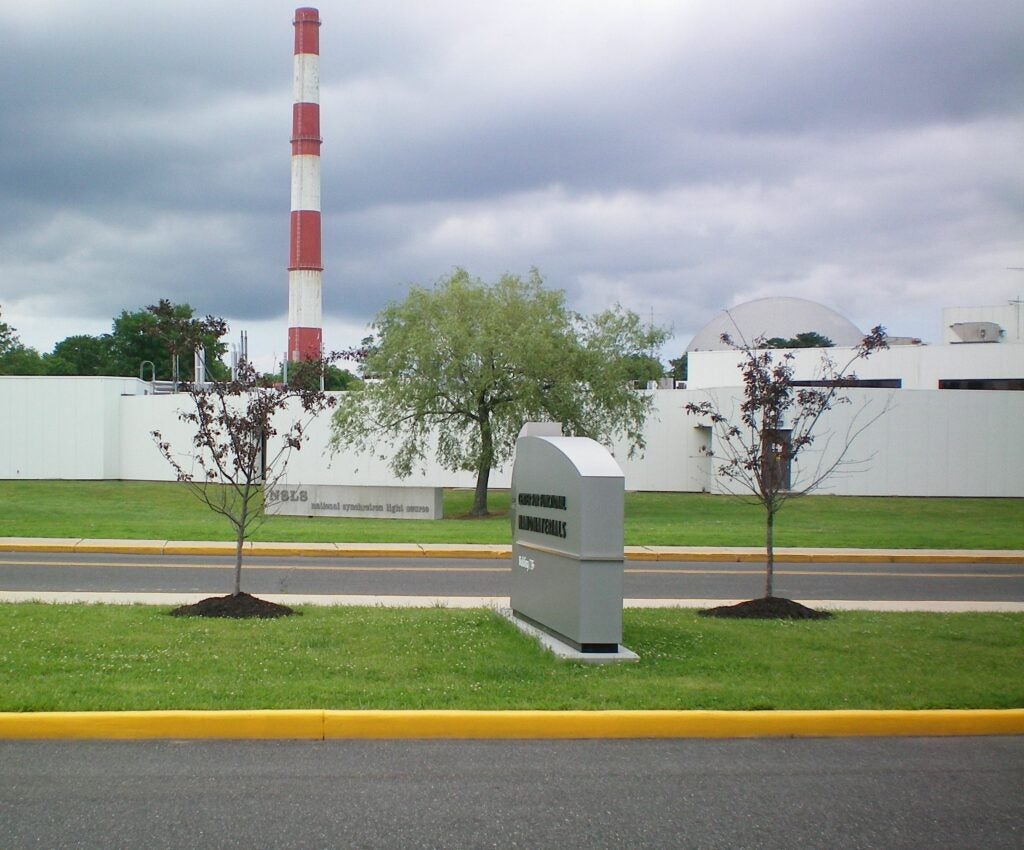 Here’s a view of the NSLS building from the parking lot of Brookhaven’s Center for Functional Nanomaterials, a department that stands to benefit greatly from NSLS-II’s nanoscale resolution. The decommissioned nuclear reactor smokestack in the background is coming down soon. 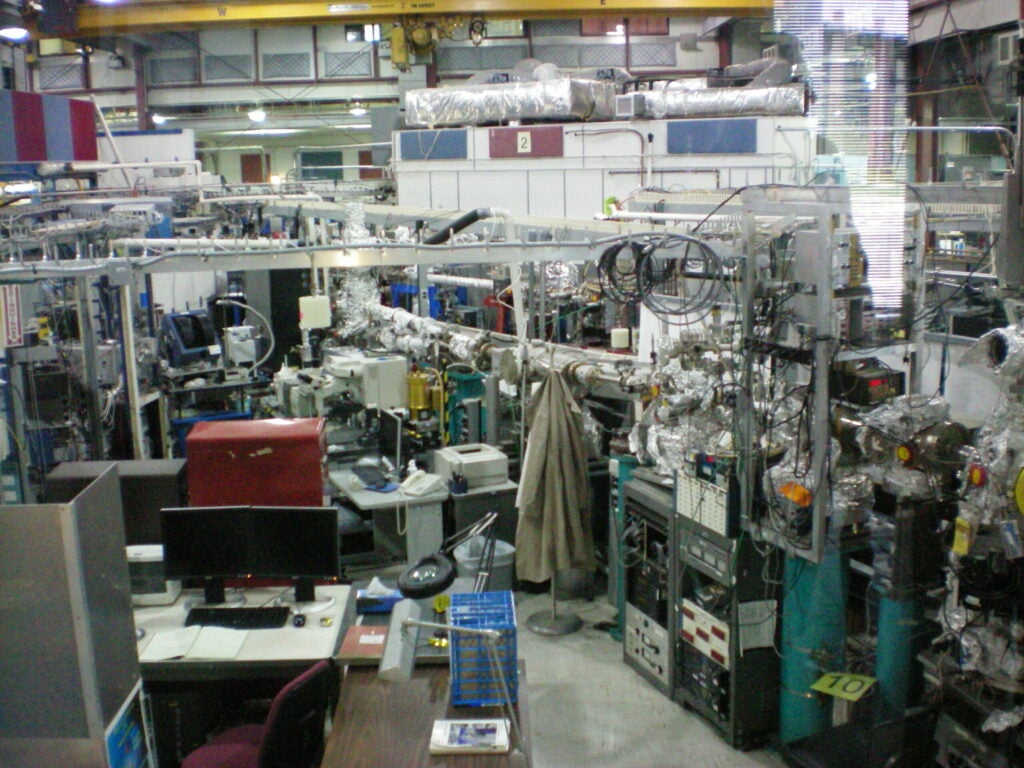 Foil-covered pipes connected to the “storage ring” (a.k.a. accelerator) hold optical elements that collect, direct, and select specific “colors” of light to suit the experiment. 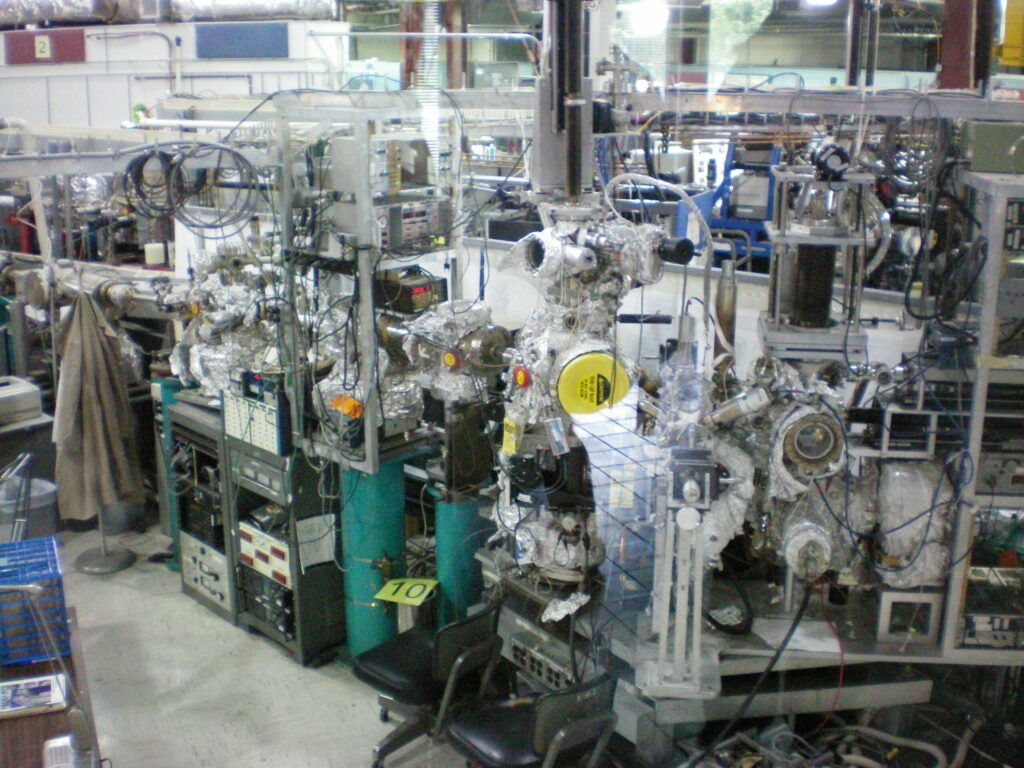 They tell me an experiment is buried somewhere in here. All that foil is used to periodically “bake” the pipes, a heating process that produces a space-like vacuum inside them. 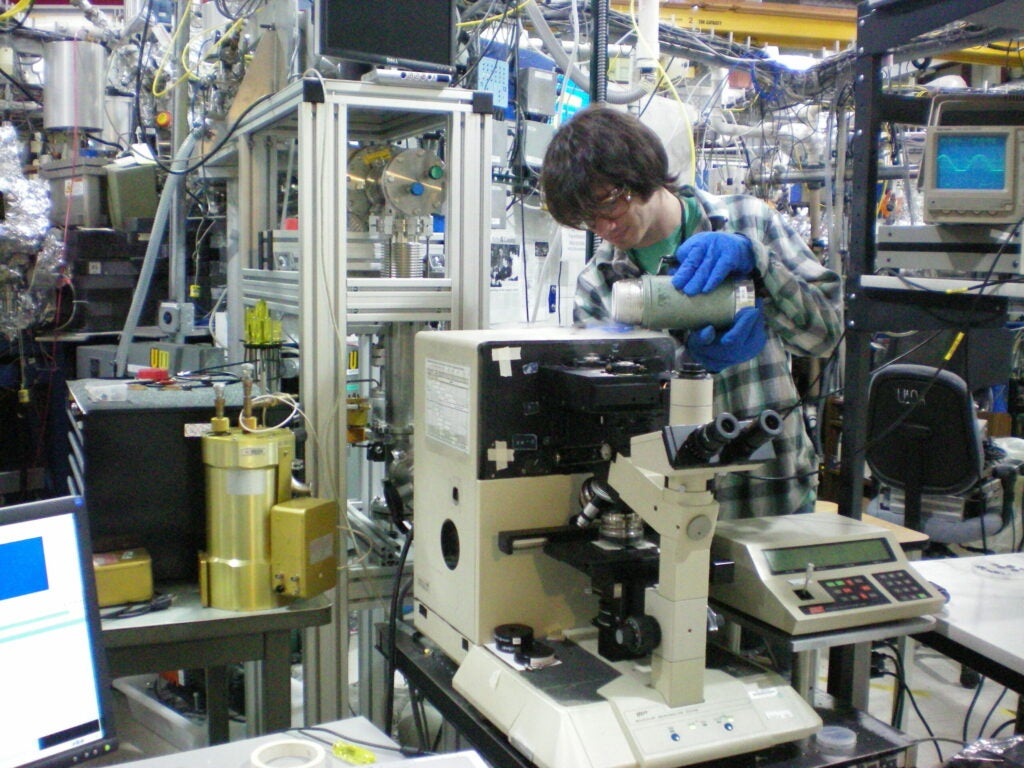 An intrepid researcher pours liquid nitrogen into a detector, which must be kept at the right temperature to be sensitive to synchrotron infrared light. 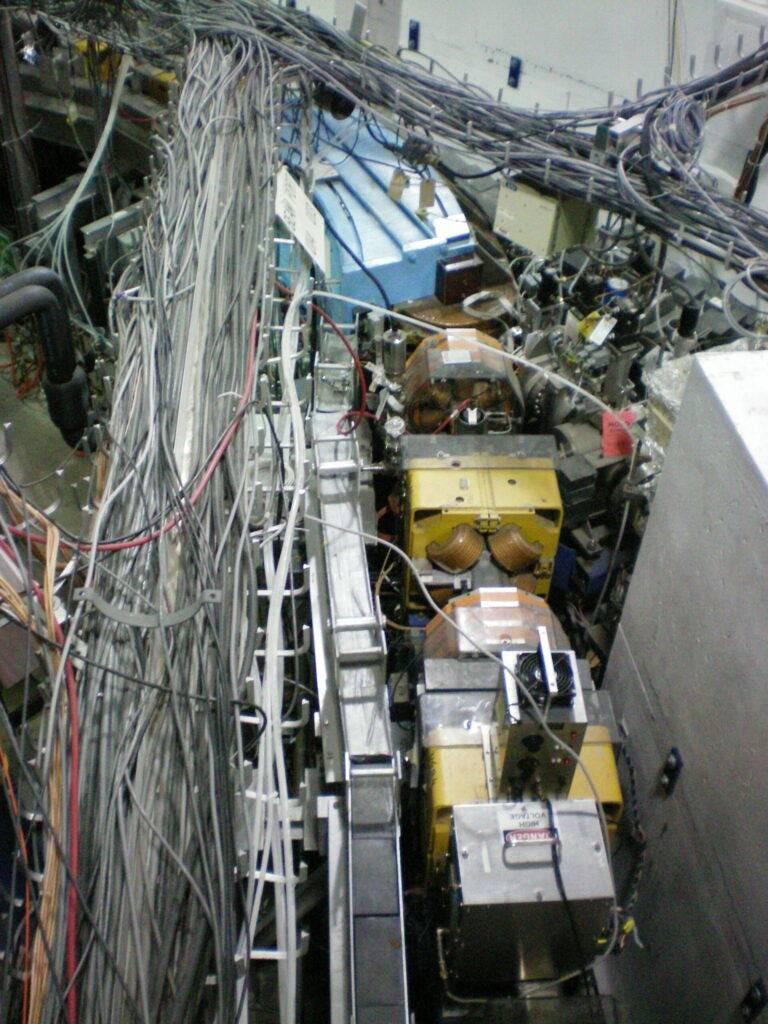 Surprising what a multi-million-dollar electron accelerator actually looks like. The blue boxy thing is one of the magnets that force the electrons to curve around the ring; this curving is what produces photons, or light. 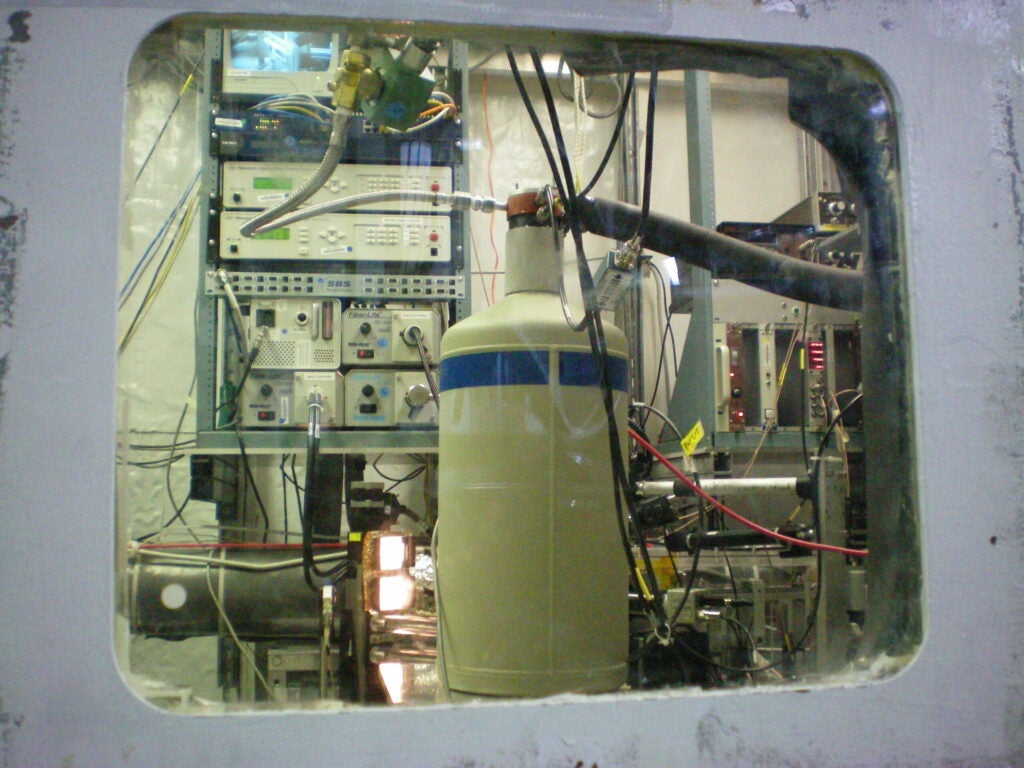