Searching for Antarctic Microbes with Antifreeze and Bombs 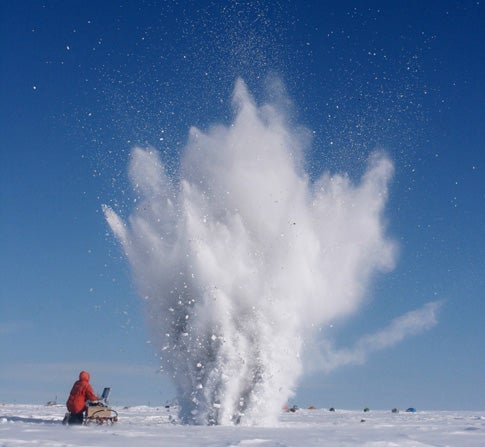 This winter, Russian scientists will resume drilling into what may be the most pristine environment in the world: Lake Vostok, an unfrozen body of freshwater the size of Lake Ontario cut off from the world for millennia beneath two miles of Antarctic ice. The sediment on the lakebed could hold clues to past climate changes, and the waters could be teeming with new forms of life — but the slightest mistake could spoil the lake for good. 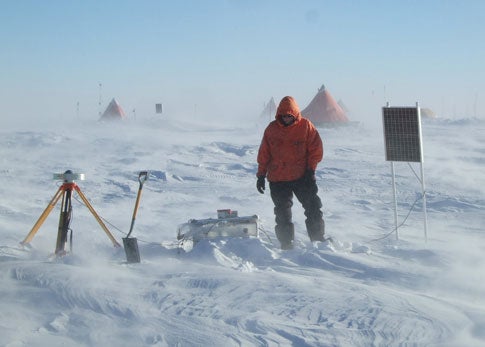 Going With the Flow

GPS units track the flow of water on Antarctica

After more than a decade of technical difficulties, and objections from the scientific community that the project could contaminate the lake with outside bacteria or drilling fluids, the Russians have cleaned up their act just 500 feet from breaching the lake. But they are no longer the only scientific group with its sights set on tapping Antarctica’s lakes. A team led by glaciologist Martin Siegert of the University of Edinburgh in Scotland recently unveiled an even more ambitious plan: Drill into the six-mile-long Lake Ellsworth, two miles below the ice in western Antarctica, and search for life using remote-control probes, in December 2012.

Scientists know that ice covered the lakes, two of some 150 bodies of water below Antarctica’s icy surface, more than 400,000 years before humans existed. Any microbes living there can survive total darkness, high pressure, near-freezing temperatures, high acidity and oxygen debt — and, as such, possibly possess never-before-seen biology. “It could be like a super-Galápagos,” Siegert says. 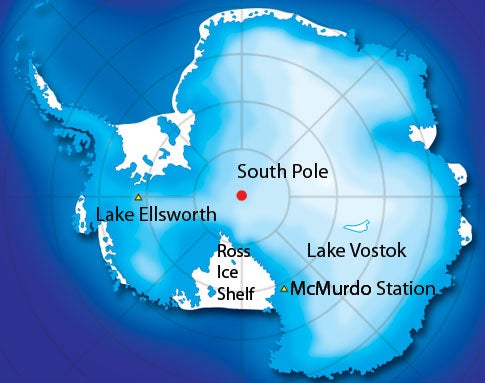 In December 2012, a team from the University of Edinburgh plans to drill Lake Ellsworth in search of life

“Given that we’ve found microbial life in other environments thought too harsh to support living things, such as seismic vents in the ocean floor, it would be surprising if we don’t find something living in these lakes,” says Mahlon Kennicutt, president of the Scientific Committee on Antarctic Research, a nongovernmental advisory body. Past discoveries of such microbes have led to the development of better artificial sweeteners and key enzymes used in DNA research, among other things.

Drilling into Vostok has been difficult. The ice at the lake’s perimeter consists of extremely hard crystals of up to five feet long, and friction on the crystals from the drill melts a layer of water that causes the bit to slip, slowing progress. “No one had ever encountered ice like this before,” explains Valery Lukin, director of the Russian expedition. This December, Lukin’s team will drill to the cusp of the lake, after which they will replace the kerosene antifreeze in the hole with inert silicon oil (concern that the kerosene could contaminate the lake has stalled the project in the past). Next year, they will pierce the lake so that water flows back into the hole, which they will allow to freeze and then remove for analysis a year later.

The U.K. team has refined its equipment to better cut the ice and preserve the lake. They plan to carve through the ice with a jet of 200°F water melted from ice extracted from the hole itself. The water, filtered twice to remove any bacteria or viruses from the outside, also sterilizes the equipment. But, Siegert says, it’s impossible to do this type of research without leaving some mark: “It’s like leaving footprints on the moon.” Although his crew won’t strike water until two years after the Russians do, he believes that his mission’s sample-collecting phase will ultimately provide the more valuable data. The team will lower a pair of probes into the lake to capture video and retrieve water and sediment samples — and any microbes in them.

Of course, the groups might not find anything, but that’s what makes drilling into this vast, completely unexplored realm so exciting. “We’ve never sampled this water, so we have no idea what’s down there,” Kennicutt says. “But it is becoming clear that Antarctica is a very dynamic place.”