If microbes can survive without sunlight and oxygen on Earth, what does it mean for the possibility of life elsewhere in the universe? 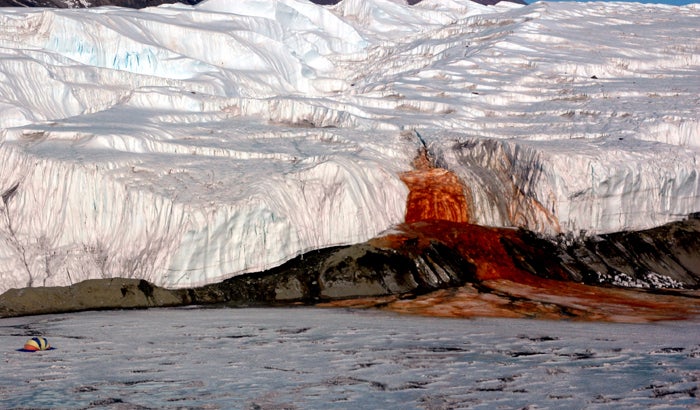 The Blood Falls seeps from the end of the Taylor Glacier into Lake Bonney. The tent at left provides a sense of scale for just how big the phenomenon is. Scientists believe a buried saltwater reservoir is partly responsible for the discoloration, which is a form of reduced iron. Peter Rejcek
SHARE

The McMurdo Dry Valleys of Antarctica are one of the last places on Earth you would expect to find a new living organism. With bitter cold temperatures and only about four inches of annual snowfall, scientists consider these valleys to be one of Earth’s most extreme and harsh environments.

The region was believed to be devoid of complex animal and plant life, but a new study has revealed that an unusual microbial life form lives under the Taylor Glacier — an outlet glacier that drains part of the East Antarctic Ice Sheet and terminates in the Dry Valleys.

An intriguing trademark of Taylor Glacier is the appropriately named Blood Falls — a waterfall-like feature at the glacier’s terminus that is stained a blood-red color. A team of researchers led by Jill Mikucki, a geobiologist at Dartmouth College, took samples from a pond of briny liquid, similar to sea water but buried under the glacier. Analysis revealed that the liquid supported a community of microbes living in a place where lack of sunlight and oxygen would have led scientists to believe that nothing could live there.

Further analysis revealed that the microorganisms were more similar to marine organisms than to those found on land, which led to the conclusion that the ancestors of the microbes living under Taylor Glacier probably lived in the ocean at one time. When the floor of the Dry Valleys rose more than 1.5 million years ago, a pool of seawater was trapped and then eventually covered by the glacier when it advanced. The researchers believe that, with no light to make food through photosynthesis, the microbes adapted over 1.5 million years to use sulfur and iron compounds to survive.

The microbes’ similarity to other marine species suggests that the community under the glacier may be the remnant of a larger population that once occupied a fjord or sea, where they would have received sunlight. When the Taylor Glacier advanced, sealing off the microbes’ habitat under a thick ice cap, some of the population probably declined, while others were able to adapt to the changing environment. Mikucki said the briny pond “is a unique sort of time capsule from a period in Earth’s history.”

According to Mikucki, early Antarctic explorers thought the red color of Blood Falls was caused by red algae, but she and her colleagues now believe the microbes that live under Taylor Glacier are a much more exotic and adaptable species. 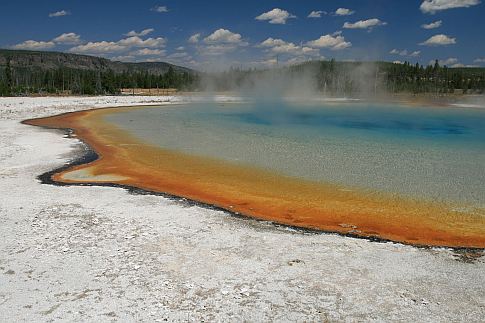 The startling color comes from microbial mats that live in the hot springs.

Until fairly recently, researchers believed that living organisms couldn’t survive in such extreme environments, such as under glaciers or ice sheets. But we now know that some organisms — called extremophiles — not only survive, but thrive in these intense environments, such as in Yellowstone National Park’s hot springs and in volcanic vents on the ocean floor called black smokers, which release hot water and molten rock.

Other unusual life forms have also been found in the Dry Valleys, such as lithophiles — microbes that live in tiny pockets of water that fill pore spaces between grains in rock. These organisms obtain energy from chemical reactions between the water and surrounding rock.

It is also possible for bacteria to lie dormant in dry, airless cold conditions for millions of years, and then become re-activated when conditions become more favorable. Such dormant microbial colonies may exist in the Martian arctic, where scientists believe liquid water periodically exists at the surface. During these temporary “wet” intervals, the soil could transform into a habitable environment for the microbes.

Most biologists agree that a search for life elsewhere in the universe should include looking for organisms that live in a variety of conditions — not just in the type of environment considered habitable by human standards. Because we now know that life can exist in these extreme conditions, the number of places we might find life is much greater than was previously believed.

If life exists on Mars, scientists believe it is most likely to be in pockets of liquid water beneath the Martian surface. These underground water chambers could harbor microscopic organisms that have evolved unique strategies for survival — much like the ones under Taylor Glacier.

The results of the study appear in today’s edition (April 17) of the journal Science.