Crocodile-like Reptiles Lived in the Arctic 55 Million Years Ago. Could it Happen Again?

Try to stump us. Send your questions to fyi@popsci.com. 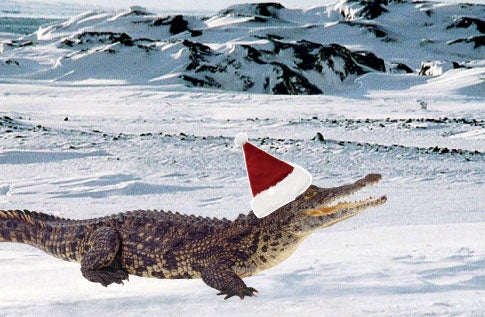 Yes, but probably not anytime soon. The Intergovernmental Panel on Climate Change estimates that the planet’s average air temperature could warm by as much as 11.5°F by the end of the century. As a result, the world could be warmer than it was 55 million years ago, says Mark Lynas, author of Six Degrees, an analysis of hundreds of climate studies that reads like a nonfiction version of The Day after Tomorrow. Back then, the Canadian Arctic was as balmy as Florida and lousy with crocodile-like animals called champsosaurs.

Determining how individual species, much less entire ecosystems, will respond to rapid climate change is difficult at best, however. In the same regions where scientists found remains of champsosaurs, they also found fossils of their favorite food: turtles. Modern-day crocodiles could certainly be comfortable in a warmer north, but only if the prey and ecosystems required to support them proliferate there too.

The Arctic air may warm up, but there will most likely still be plenty of ice in the winters. Even aggressive climate models estimate that it will probably take thousands of years for the ice sheets to disappear year-round, so cold-blooded crocs will have to wait at least that long to head to the poles.