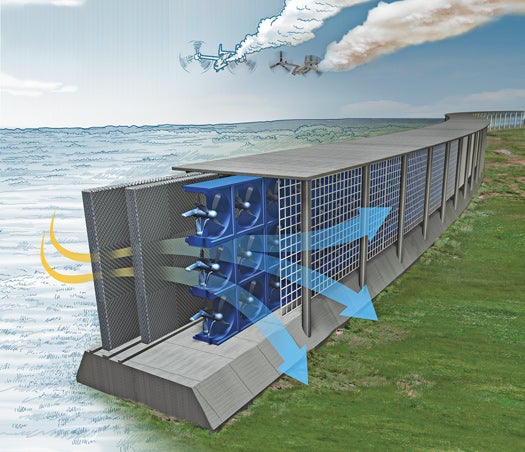 In the 1992 film Unforgiven, Clint Eastwood spends most of the movie slowly and methodically avoiding violent confrontation with the bad guys before finally turning things around with a bloody burst of gunslinging. That’s something like the approach of Canadian physicist and environmental scientist David Keith. Except that his villain is climate change, and while he’s still doing everything he can to avoid a fight, Keith is also stockpiling ammo.

“If we do the job we should be doing on cutting emissions, and we are lucky, we won’t need geoengineering,” says Keith, a professor at the University of Calgary whose start-up company, Carbon Engineering, is developing commercial-scale devices to capture atmospheric carbon dioxide. That’s the slow and methodical. “But if we can’t control atmospheric CO2 well enough, then we might want to do the solar stuff.” That’s the gunfight.

For several years now, Keith, who has served as a member of Canada’s blue-ribbon panel on sustainable energy technology and as a member of U.S. National Academy of Sciences committees, has been the leading voice in the call for serious research into geoengineered schemes for cooling the planet. The most common example would be to scatter sulfates in the stratosphere to reflect sunlight away from the planet.

The cooling would be immediate and global. We know this, Keith says, because it’s happened before. When Mt. Pinatubo erupted in the Philippines in 1991, the resulting plume of sulfuric ash cooled the planet by about 1°F for a year. Carbon dioxide remains in the atmosphere for centuries, and even the most optimistic proposals for CO2 sequestration would take decades to have an effect. Should we find ourselves faced with an immediate environmental emergency—a shifting Gulf Stream or an impending collapse of the Arctic ice sheets—effective “sunlight mediation” could theoretically be a quick retreat from the edge.

The immediate problems with this, however, are twofold. First, there’s an obvious moral hurdle. Most people reflexively reject notions of geoengineering for fear that they may cause more harm than good, and undermine efforts to reduce carbon emissions. The other drawback is that the method would be cheap and easy enough that even a rogue nation could pull it off, which leaves open the very real possibility of unilateral action with global consequences.

The real hope is to refine geoengineering methods and develop standards while simultaneously working toward a future in which they would never have to be used. That’s where Keith’s carbon-sequestration technology comes in. Most carbon-capture systems propose sequestering CO2 from large facilities such as power plants. Keith’s plan, however, is more mobile, calling for towers that could be deployed wherever in the world land, climate, and labor costs are optimal.

These carbon suckers would employ fans to move air through a solution of sodium hydroxide, which absorbs the CO2. Inside, lime bonds with the carbon dioxide to form solid calcium carbonate. The reaction releases the sodium hydroxide for reuse in the first step, while the CO2 could be stored in underground reservoirs that once housed oil and gas or be recycled into gasoline.

Keith has proven this process with a test tower 20 feet tall and four feet wide that can capture two tons of CO2 per square foot annually (roughly equivalent to the yearly output of one American) using less than 100 kilowatt-hours of electricity per ton. His company expects to spend about $5 million over the next three years refining the technology and investigating how best to scale it up—way up. The ultimate goal is for fields of towers some 300 feet long and 60 feet tall, scrubbing up to 1.1 million tons of carbon a year.

Keith admits that his carbon scrubber is no silver bullet. “We have patents and new ideas,” he says, “but the thing you have to get right is cutting emissions. Unless you do that, CO2 removal will be irrelevant.” And if we don’t do it quickly enough, the guns may have to come out.