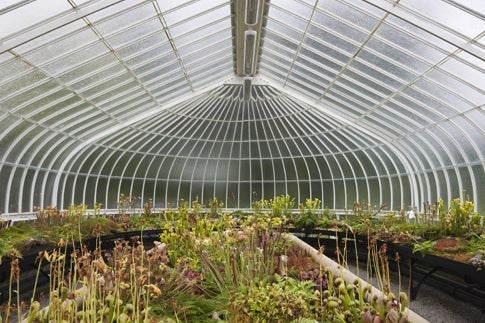 The southern coast of Spain is known for hot parties, hot food, and hot people. But one thing it may soon be known for is cooling the climate. The southeastern region of Almeria is home not only to paella and flamenco but also to the world’s largest expanse of greenhouses. The roofs on these “hot houses” reflect incredible amounts of sunlight – so much, in fact, that scientists now say they could be responsible for lowering the local temperature.

Today, 26,000 hectares of Almeria’s semi-arid pasture land is dominated by greenhouse horticulture in a constant change-over that has been occurring since the 1970s to improve the region’s agriculture. Using satellite data, scientists from the University of Almeria identified differences in surface radiation (how much heat is emanating from the ground) and albedo (the ability to reflect sunlight) between the greenhouse-covered land and the natural, semi-arid land. Simultaneously, they compared temperature trends inside the region with those throughout Spain. The results showed that in Almeria, air temperature has cooled by an average of 0.3 degrees Celsius per decade since 1983. The rest of Spain, however, has experienced temperatures rise 0.5 degrees Celsius. It seems the white roofs dotting the region are good for more than just an iconic photograph: they are also the key to the cooling temperatures.

The researchers believe that this relatively simple technology (reflective roofs) could be applied to similarly semi-arid regions throughout the world and have the same effect.