Want more horsepower? Put away the Snap-ons–this is a job for a gearhead with a laptop.

When the hot-rodders who rolled packs of Luckies in their sleeves wanted more power, they did stuff that took plain old wrenching: advancing the distributor’s timing, installing bigger carburetor jets, playing with fuel-pump pressure. Today tuners can squeeze an extra 5 to 100 hp using only a laptop, a soldering gun and a deft hand at writing code.

All of a modern automobile’s ignition, fuel-injection and combustion parameters are controlled by a small onboard computer–the engine control unit, or ECU, the heart of which is a microprocessor that modern gearheads call “the chip.” It’s programmed with all of the instructions (or maps) that direct the engine’s various systems. To muster more horses, tuners just rejigger those maps, forcing the car to run closer to (and sometimes over) its limits.

For pre-1996 cars, re-coded chips can be bought on the mail-order aftermarket and plugged into a socket on the ECU motherboard, not unlike installing a memory card in a PC. In every post-’95 vehicle, by law the chip has been miniaturized and hard-soldered onto the ECU’s motherboard, so a tuner needs to know how to pull it off, erase and reprogram it, and resolder it onto the board. The latest tuning tech is to simply connect a laptop to the OBDII–the On-Board Diagnostics II socket, usually found under the dashboard–and flash new software to the factory chip.

Will chipping actually void your warranty? That’s up to your dealer (who will know what you’ve done). Just don’t expect to be covered for claims that are the direct result of your hijinks, such as an overstressed turbo.

THINGS TO KNOW WHEN CHIP SHOPPING

Cost is proportional to the value of the car and to the effort required to unlock the ECU’s code. Expect to pay as little as $500 to chip a Honda Civic, and as much as $4,000 for a twin-turbo Porsche.

The actual boost you get will vary depending on your car, but if a chipper claims 18 hp or greater on a non-turbocharged car, he’s blowing smoke.
(Turbocharged cars leave more room for tweaking.)

Ineptly written chip code can at best cost you horsepower and at worst lead to early engine failure, so do your homework online and with car clubs to find a reputable chipper for your car.

Coding chips is not a DIY job–cracking a car’s code can take a pro several months–so your part of the chipping process is pretty simple. To get a sense of what’s involved, we asked PopSci automotive editor Eric Adams to chip his 1999 VW Passat. Adams pulled out the ECU (a little metal box housed in a larger black box near the windshield–see Photo 1, above left) and shipped it to well-known chipmakers APR, who in one day installed a new chip (Photo 2) and an external button (Photo 3) for switching between stock mode and chipped mode. APR said the chip would jump the 1.8-liter turbo from 150 to 205 hp. 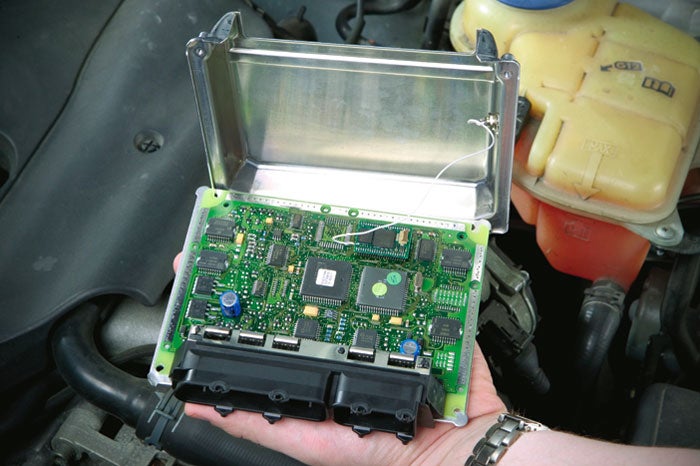 Adams shipped the ECU to well-known chipmakers APR, who in one day installed a new chip. 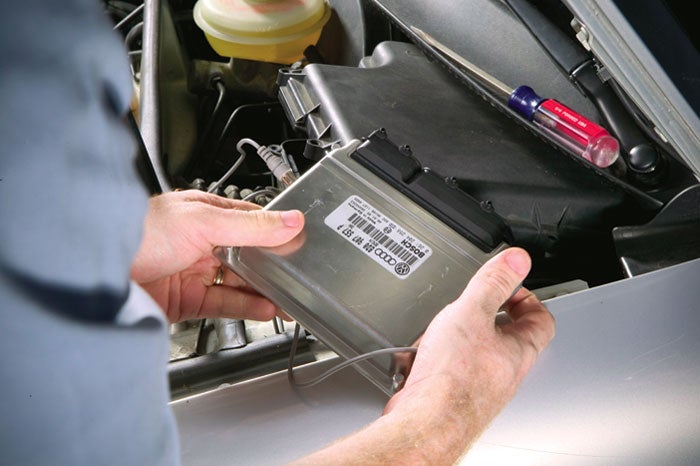 PopSci automotive editor Eric Adams pulled out the ECU (a little metal box housed in a larger black box near the windshield). 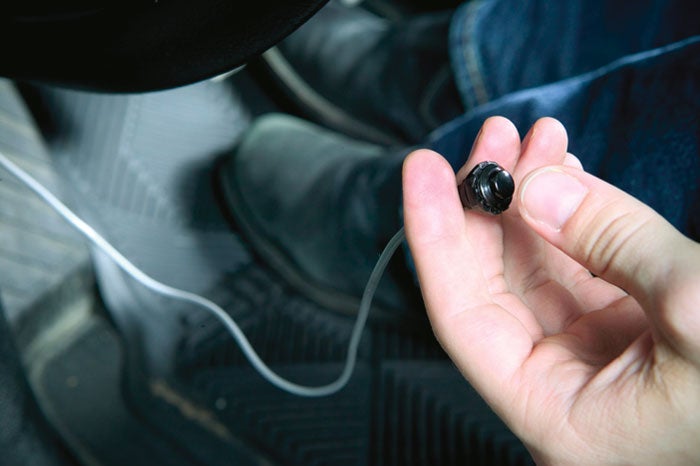 Chipmakers APR installed an external button for switching between stock mode and chipped mode. APR said the chip would jump the 1.8-liter turbo from 150 to 205 hp.