Got a digital video recorder from the cable company? Save more shows on it with a new hard drive 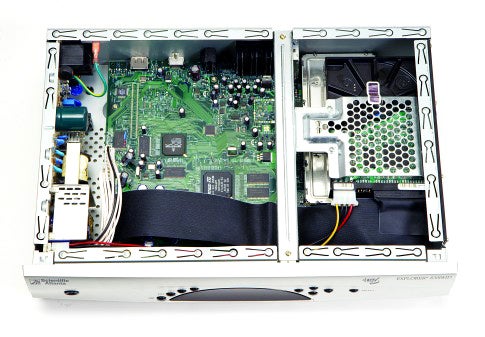 Like TiVo before it, the cable-box digital video recorder (DVR) is a gadget that’s easy to love-until you realize that last week’s game has been erased to make room for Desperate Housewives in high-definition. Fortunately, you can easily double or even triple your DVR’s capacity by adding more hard-drive space. Be aware that since you don’t own the box, the cable company can fine you for messing with it. That said, if you have a Scientific-Atlanta 8300-by far the most common cable DVR-with the correct operating system, you can swap the internal drive for a bigger one [see steps below]. Or take the safe route and just plug an external hard drive into the SATA port on the back of the box. A caveat: You have to leave the external drive on all the time, and its fan can get noisy. Of course, you can always just turn up the volume on that extra month’s worth of recorded games.

Before you start, determine which operating system your box uses-SARA or Passport-by putting the box into diagnostic mode. To do this, hold down the “select” button on the front of the box until the “mail” light flashes, then hit the “info” button. Scroll down to find the OS. Only SARA boxes can take a new internal drive, but either will work with an external drive.

How to Get Shows Off the Box

All DVRs encrypt their recordings to prevent piracy, so you can’t simply copy them to your PC or Mac. You can, however, record a show to your computer. The trick is to use a digital video converter, such as Pinnacle’s new $50 Dazzle DVD Recorder (pinnaclesys.com). Plug one end into the analog outputs on the back of your cable box and the other into your computer’s USB port. Hit play on the DVR, and use Dazzle’s included software to capture the video to your computer in real time. From there, you can burn shows to DVD for archiving.