Can’t get enough of the Craiyon AI image generator? Try these other AI tools.

Experience the power of neural network right in your browser. 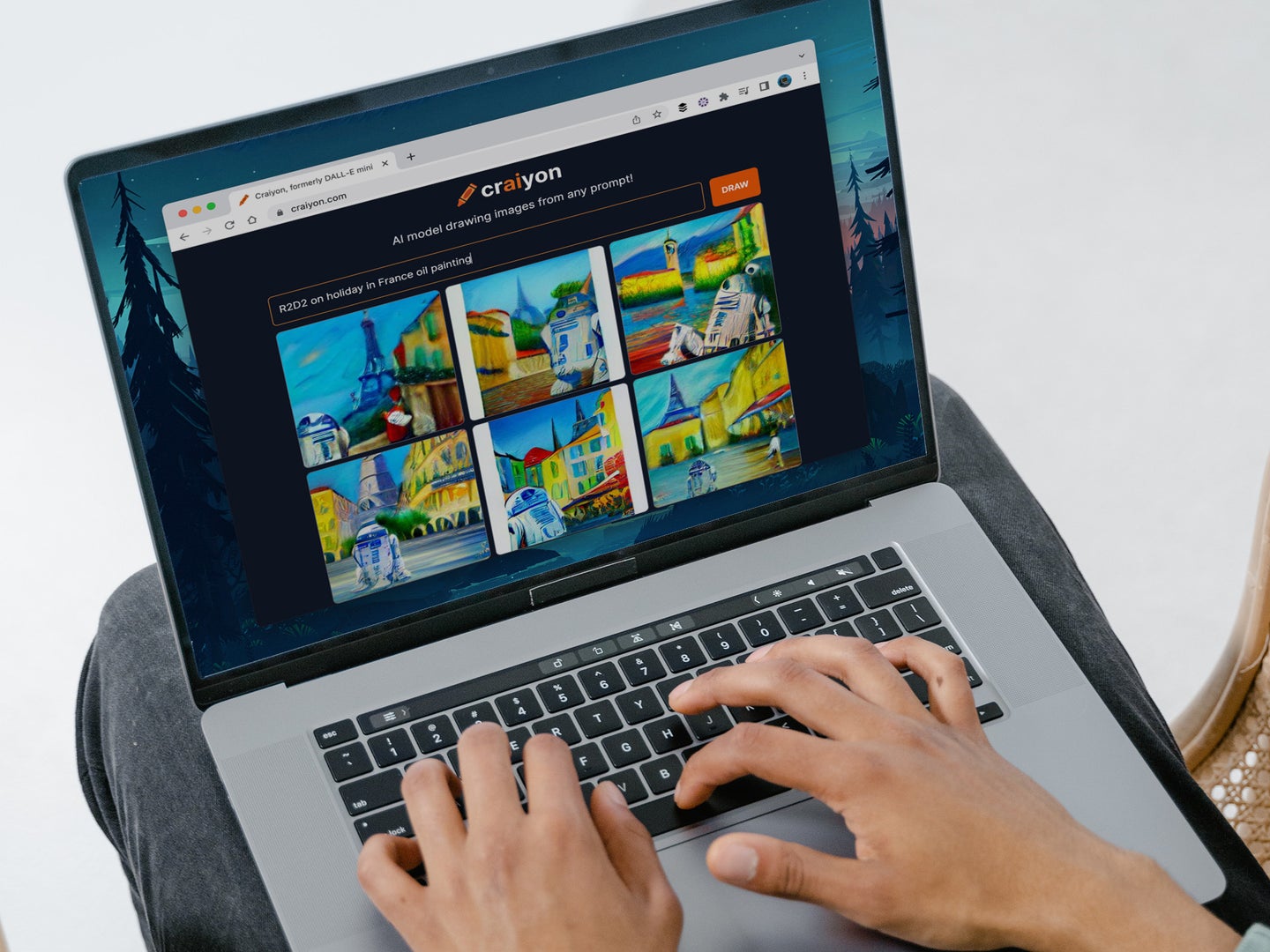 Why work when you can reimagine R2-D2 in a Van Gogh painting?. MART PRODUCTION / Pexels
SHARE

Software developers are keen to show off the latest in artificial intelligence, which is why this technology is making its way out of the lab in the shape of online tools everyone can access through their browser.

Whether you want to generate weird and wonderful AI images from text prompts or create a musical composition in partnership with a computer, there’s a lot to explore.

These apps are getting better and better with time, and they can give you a good idea as to what AI can do and where it might be headed in the future.

This Person Does Not Exist

This Person Does Not Exist produces AI-generated images of faces that look incredibly real—but they’re not. All you need to do is load (or reload) the page to get a new one.

It’s the work of software engineer Philip Wang, and it shows off the power of publicly available Generative Adversarial Networks (GANs). These are dual systems where a series of algorithms or neural network produces an output (in this case, an image), another one assesses its quality, and they repeat the process millions of times.

[Related: Artificial intelligence is everywhere now. This report shows how we got here.]

In this platform, the first neural network generates a face from a vast library of data. Then, the second neural network judges how realistic the face is based on similarities to pictures of actual people, and it accepts the image only if it passes a certain threshold.

While this tool could ensure the world will never be short of generic stock photos again, there are other, more sinister implications to it. Among those, is the potential to create ID documents for people who don’t actually exist.

If there’s an artist inside you, then Magic Sketchpad could help bring it out. It’s an AI experiment from a team at Google that gets a neural network to draw along with you. Every time you let go of a line, the platform will respond to your scribble by finishing the drawing according to a set category.

The neural network has been trained on millions of doodles mined from the also highly entertaining Quick, Draw!. Start by picking a category from the drop-down list at the top right of your screen—there is plenty available, from frogs to sandwiches. Magic Sketchpad knows the sorts of shapes and lines that people tend to make when they’re trying to draw simple concepts like a bird, a ship, or a cat, so it can predict what you’ll draw next and finish the doodle for you.

The tool can also help artists to augment their work or provide new prompts for creativity. Maybe one day we could see computers doodling as well as humans do.

If you’re more of a musician than a sketcher, then AI Duet might suit you better. Built by an engineer at Google, AI Duet puts a keyboard down at the bottom of your screen and produces an automatically generated response based on what you play on it. You can click the keys on your screen, hit them on your keyboard, or even connect a MIDI keyboard to your computer.

A traditional approach to a project like this would have involved a programmer coding in hundreds or even thousands of responses to specific patterns a user might play. But AI Duet comes up with its own responses based on a huge database of tunes it has trained on. This gives the program the ability to generate melodies that match a user’s input without any specific instructions.

This is another example of how AI can work in tandem with artists to produce new creations, whether that’s for movie soundtracks or background music in games. Theoretically, you could rework one riff an endless amount of times.

If you’ve been on Twitter recently, there’s a high chance you’ve seen the creations of the AI image generator Craiyon, formerly known as Dall-E Mini. Essentially, it’s a neural network that turns text inputs into images—you type what you want to see, and the system generates it.

It is as simple as typing out what you want to see in the box at the top and clicking Draw.

You can combine two of your favorite fictional characters in a setting of your choosing, or reimagine a famous work of art in a different style— you’ll soon figure out which prompts work best.

[Related: 5 ways to get Craiyon, formerly Dall-E mini, to bend to your will]

To generate images, Craiyon pulls in information from millions of photos online and their captions. That means it has a vast visual knowledge of everything from celebrities to national landmarks.

The results produced by Craiyon are a little bit rough around the edges for now, but it’s not difficult to see how we could eventually use this technology to generate highly realistic images from scratch using only a text prompt.

Even Stranger Things is well worth a look even if you’re not a fan of the Netflix show that inspired it. The platform lets you submit a photo of anything you like and turns it into a Stranger Things-style poster.

The site was built by creative technologist David Arcus, and it taps into the Google Cloud Vision API, a machine learning system trained to recognize images based on a vast database. So by processing thousands of pictures of dogs, for example, the AI learns to more accurately spot a dog in other photos.

Even Stranger Things will try to identify what’s in the picture you’ve submitted and incorporate it into the finished design, usually with broadly accurate results.

It’s quite a simple AI tool, but it shows how we can use databases to teach machines to spot new patterns that aren’t in their training materials. The platform is also a great example of how algorithms can apply a particular visual style to photos to create something new.

Talk To Books is another artificial intelligence tool created by engineers at Google. In this case, the platform uses the words from more than 100,000 books to automatically respond to a question or text prompt.

While you can’t really hold a conversation with the site, you can ask questions like “how can I fall asleep?” and “how did you meet your partner?” to get answers that make sense. Type your prompt, then press Go to see the results, which you can filter by literary genre if needed.

This is another example of how machine learning enables AI to predict a good response to a question or prompt by analyzing patterns in text.

At this stage, AI can’t really finish novels or even news articles, but given enough data and refinement, these are certainly possible uses for it in the future. We might even be able to complete famously unfinished literary works as the original authors would have done.

As the name suggests, Pix2Pix is an AI image generator that takes one picture and turns it into another. In this case, the tool shows you a photograph based on something you’ve doodled.

Scroll down the page and you’ll see there are four different examples to have a go with: Cats, buildings, shoes, and handbags. Sketch out your drawing in the window on the left, and click Process to see what the AI makes of it.

This is another engine based on a GAN, where two neural networks work in tandem to produce realistic results, and even figure out where the edges of objects in images should be.

Turning sketches into realistic photos can be hugely useful in all kinds of areas, from building construction to video game design.  And the quality of the results is only going to improve over time as these neural networks get smarter and smarter.