From taking voice notes to finding the right chords, we’ve got 10 rocking options for you. 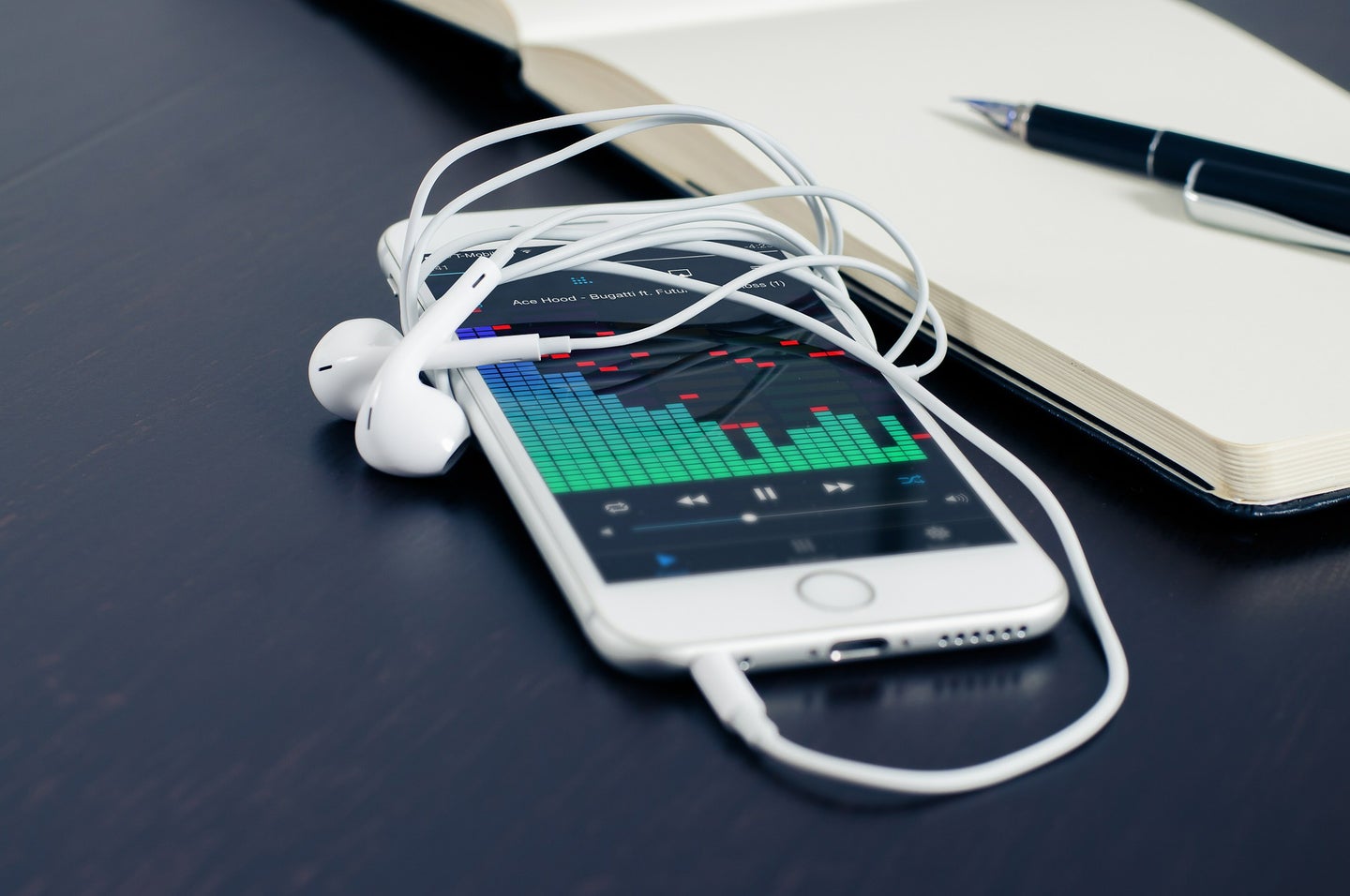 A full music studio in the palm of your hand. Pixabay
SHARE

Up until recent years, it was rare for anyone in the music industry to produce an entire album outside of the studio. The launch of GarageBand 6 in 2010 changed that, ushering in a new type of musician: the bedroom producer. Home studios quickly popularized a DIY approach to music production, and now, thanks to advances in mobile technology, these bedroom producers are shifting from laptops and PCs to smartphones.

Whether you’re just starting out or you’re a seasoned pro, making music on your smartphone might seem like a sweet (and rewarding) deal—but it’s no easy feat to figure out which software will be right for you.

Below, we collected a few of our favorite music-making and song-recording apps to turn your little jingles into the next big hit.

When inspiration strikes—whether you’re lucid dreaming or awake—you need to be ready to hit record and lay down a riff. These song recorder apps should do the trick. Just remember to factor in background noise and your smartphone’s speaker quality, volume levels, and storage capabilities before you start a session.

This option is a great alternative to the default Voice Memo app that comes with your iPhone. Cassette enthusiasts will love how each new recording appears in the app interface as its own tape. The ability to export your files in a variety of formats beyond .mp4 is also a nice touch. On the downside, because each recording takes up a lot of room, you’ll need ample storage space on your phone.

[Related: This Spotify upgrade could change how you stream music in the future]

Unlike iOS devices, Android phones do not come by default with a built-in voice recorder app. That means Easy Voice Recorder will be your new best friend. Record high-quality PCM and MP4 audio files to save space. And if you’re feeling particularly narcissistic, you can even set your tunes as your ringtone. While the free version of this app has annoying advertisements and limited recording time, you can pay $4 to go ad-free and get limitless recording.

If you’ve ever dreamed of having instant access to any musical instrument known to humankind, you need a solid Digital Audio Workstation, or DAW. This virtual musical playground contains powerful software that replicates all the best parts of a professional recording studio, from microphones to audio mixers to trombones. Best of all, it fits on your PC, laptop … or smartphone.

Since 2010, GarageBand has been the entry point for bedroom producers of all stripes, and for good reason: It’s the easiest way to record multiple tracks (of vocals or any instrument) on any device. If you’re already familiar with the desktop version, translating your know-how to the mobile app is a cinch. To get started, simply press the “+” button, choose the type of song or instrument you’d like to record, and you’re off. More seasoned producers can import locally-stored files directly into the app, then chop n’ screw ‘em, add filters, or manipulate them in any other way. Unfortunately, the interface can look a little jarring at first, because you have to continuously swipe between the workspace and recording screens to get anything done. Once you get the hang of it, however, you’ll be making masterpieces in no time.

Better known as Fruity Loops, FL Studio is the DAW of choice for hip-hop producers and DJs looking to go beyond GarageBand. You can expect more advanced features, such as high-quality samples and synthesizers; an advanced FX panel complete with flangers, compressors, low- and high-band pass filters; and even an advanced step sequencer for fast and accurate beat programming. But everything comes with a price, and for features like these, you’ll have to pay up to $13.99.

From dancey beats to otherworldly bleeps, these apps create a wide range of sounds you can manipulate to create your own music. Use them to become an audio pro without touching an instrument.

As a Beatwave devotee, I consider this app the most creative way to make beats that are uniquely your own. Open it, choose the set of sounds you’d like to work with, and start drawing patterns in the provided grids. It’s quite literally musical finger painting! More advanced producers will love that you can mimic multi-track recording by layering multiple grids together and adding different effects to each piece of your opus.

This app’s interface will delight fans of Reason—Propellerhead’s popular Digital Audio Workstation. And you don’t have to be familiar with Reason to play with Figure. Everyone from beginners to more advanced producers will love how simply you can adjust the circular modules (a cheeky reference to the Circle of Fifths) to create truly mesmerizing beats. And musical savants will appreciate that you can tune your creations to any key and adjust the tempo to any BPM.

The Kaossilator is one of the most innovative pieces of music hardware to hit the market in the past decade. This app completely replicates the best parts of Korg’s freely playable synth, putting a nearly $300 synthesizer in the palm of your hand. Like Beatwave, you can play different sounds simply by stroking, tapping, or rubbing the app’s XY Axis. You can even turn your “musical finger paintings” into loops that you can then “DJ” in real-time. Oh, and it features stunning visual effects that move along with the performance—completely in sync. Users swear by this app, but apparently developers still have some work to be done. According to some reviewers on Google Play, the app has some bugs that make it crash constantly, and some users have even complained of not being able to reopen unfinished projects.

[Related: Good music kind of gets you high]

Moog put the synthesizer on the map, paving the way for electronic music to be the force it is today. For many, a Moog synthesizer is the gateway to more advanced music production techniques, and, let’s face it—there’s something completely magical about that warm, thick Moog sound. Filtatron takes the best part of a Moog (the Moog Ladder Filter) and allows you to import and record any sound into the app and give it the “Moog treatment.” Need more wobbles? Filtatron can do that. Craving a sawtooth or square wave? It can do that too. In the con column, you’ll need to get used to working the virtual knobs in the app, because they can be a little tricky to turn, especially if you’ve got larger fingers.

Learning how to master guitar, piano, or the basics of composition? These apps will be the perfect companion as you practice.

If you’re looking to get your start as a songwriter, then this is the app for you. Enter a two-bar riff into the app using the three available “starter notes,” and Chordana will automatically generate some ideas to help you kickstart that next big hit. You can also go even more automatic by selecting your music genre, “range of melody motion,” and “emotional tension.” Then Chordana will write an entire song that you can edit to make your own. Although you can also whistle a riff into the app, this function is not completely fool-proof, so your melodies may be off by a note or two. But you can always edit them in the app to get them just right.

Think of this as your chord encyclopedia. You can search for chords in any scale, both for guitar and piano, and you can learn how to build any chord in any inversion. Commerce Editor Billy Cadden particularly loves that you can “strum” on your screen, so you can actually hear what you’re playing. That said, with great power comes greater anxiety—because it offers so many options, the app could be a little overwhelming for beginning guitarists and pianists.