A science-based guide to giving a genuine apology 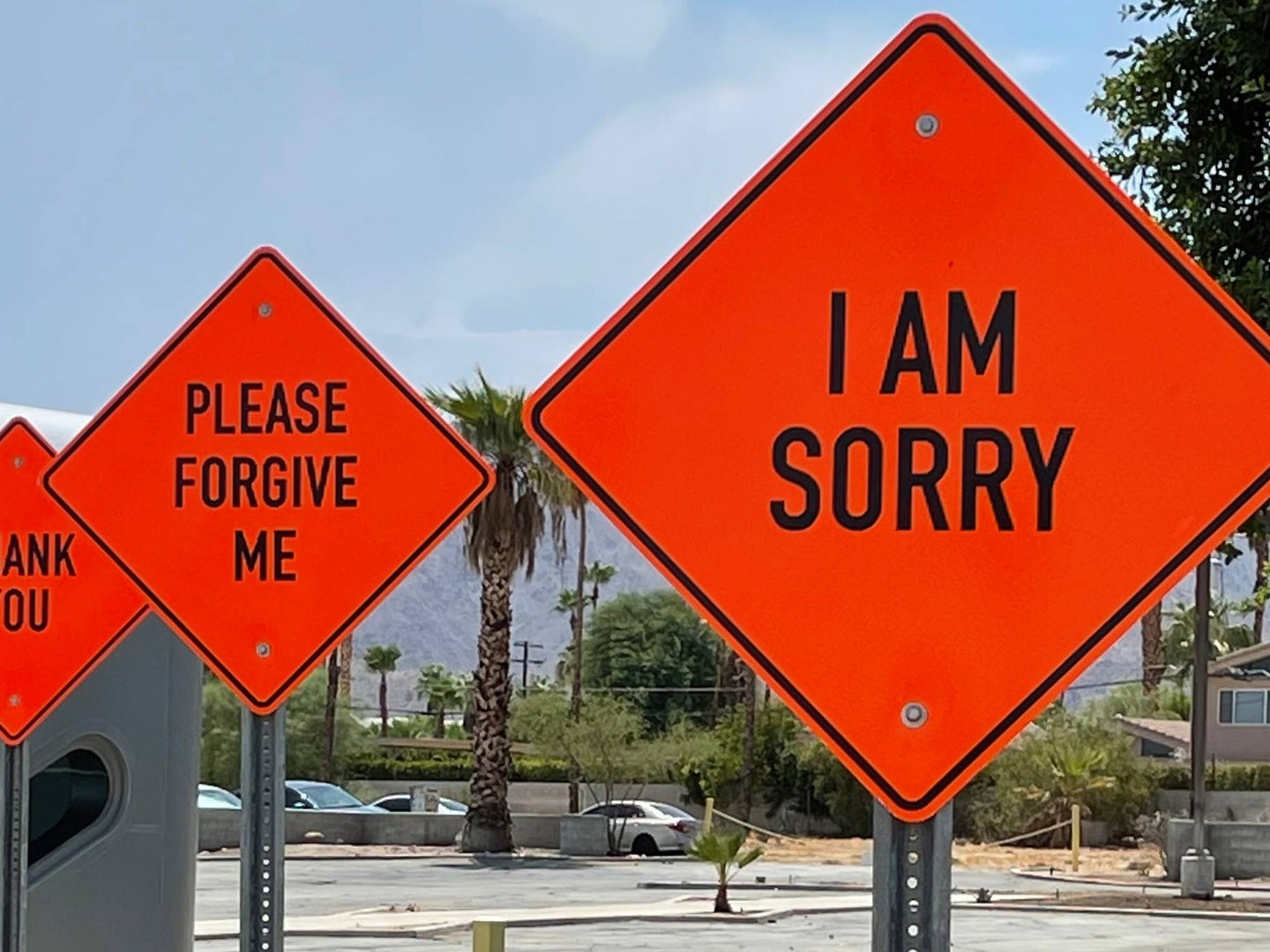 Getting an apology right is something we talk about a lot more these days—whether it’s regarding a public figure who screwed up, or any of us when we wrong a friend.

Ideally, we should try to avoid saying or doing things that will deliberately hurt somebody else’s feelings but that’s easier said than done. In the age of social media, access to bigger platforms and the ability to instantaneously share our every thought, make it almost inevitable to make someone mad. So, the least we can do is to learn how to offer a good apology.

Psychologists, social anthropologists, and even marketing researchers have long been trying to crack the code for the perfect apology. Their work brings us closer to a scientifically proven way of saying you’re sorry, and reveal the reasons why you should do it in the first place.

Make sure your apology is real and heartfelt

Genuineness is often overlooked, but it is a key element to a good apology. It seems like a no-brainer, but research shows some people have a hard time conveying sincerity as they think saying they’re sorry is ineffective in general, among other reasons. To them, we don’t apologize when we do something bad, but only when we get caught doing it, explains Richard Stephens, a senior lecturer in psychology at Keele University, in the UK.

There might be another reason, too: saying you’re sorry is hard.

“If the apology comes easy to you, then it’s probably not a good apology,” says Judy Eaton, an associate professor of psychology at Laurier University, in Canada, who specializes in researching interpersonal conflict. “Apologizing properly is hard because you’re making yourself very vulnerable.”

[Related: Why the smartest people can make the dumbest mistakes]

To overcome any suspicion and make sure people believe you truly mean what you say, science is clear, Stephens says—you’ll need intensity. A 2013 German study found that the more restaurant staff said “I’m sorry” when apologizing to customers for bad service, the higher participants rated that apology. The same study concluded that in some cases, a bad apology was equally upsetting as no apology at all. The Oxford dictionary calls these halfhearted expressions of remorse “nonapologies” or things that look like apologies, but don’t actually show regret, and therefore, make a situation even worse.

But intensity is not only about the words you use—the correct non-verbal language can make an apology more effective as well.

“Facial expressions such as eye contact, watery eyes, crying, vocalization, are certainly important cues for how an apology will be received,” said Holger Roschk, a social science researcher and author of the 2013 study.

Empathize with the person you’re apologizing to

When restaurant staff in the German study used phrases like “I feel very uncomfortable about it” or “I hope you can still enjoy the evening,” their apologies were received better.

“Empathy had clearly the larger impact on how respondents rated their satisfaction,” said Roschk. For him, it made sense, as we can usually tell when we’re on the receiving end of a dishonest apology.

When you apologize, you should focus strongly on how you’ve impacted the other person, how your actions will have repercussions for them, and how you deeply feel about that. Data shows that apologies work best when they align with how the victim perceives themselves and their values. If efficiency is important to them, for example, you will want to tap in on that, whereas if trust is more relevant, you want to make that the focus of your apology.

Take responsibility and admit that you are wrong

Being accountable for your actions is arguably the most important element of an apology, says Eaton, the researcher at Laurier University. Taking responsibility for what you’ve done, and admitting your mistake might even save you the apology altogether.

“I found that you don’t actually even have to say you’re sorry if you take responsibility,” says Eaton. This is because owning up to what you did provides validation to the person you’ve wronged, she explains.

Similarly, in a 2014 study, sociologists pored over the public apologies of 183 celebrities, including Chris Brown’s (after destroying the set of Good Morning America), Oklahoma State Senator Sally Kern’s (for stating that women and African Americans earn less than white men because they don’t work as hard), and Olympic runner Marion Jones’s (for doping).

By looking at blog posts, social media commentary, and polling data, researchers analyzed how the public responded to these apologies and concluded that when an offender denies responsibility it is not well perceived. This approach makes it seem like the offenders are putting their needs first, shifting the blame, or dismissing the impact their wrongdoing had on the public.

President Bill Clinton’s famous apology for the Monica Lewinski scandal in 1998 is a great example of how accountability makes an apology better. After a warm start, the former head of state addressed the issue using sentences like “That was not appropriate,” and referred to his actions as “a personal failure” for which he “was solely and completely responsible.”

“The televised apology by Clinton fits our model of effective apology substance and sequence and had a positive effect on Clinton’s popularity ratings,” says Karen Cerulo, a sociologist at Rutgers University involved in the 2014 study. “His ratings significantly increased after the apology.” She mentions the results of a CBS News 1998 poll where Clinton’s performance as president received a seven percent approval raise after the apology.

Express your intentions to make amends

They say talk is cheap, which is why if you do something wrong, you’ll have to try and fix it—or at least be willing to. This is usually not an option for people who committed serious crimes, but it can be helpful on an interpersonal level, says Eaton. For example, if you’ve lost or ruined something that was precious to a friend, you can take steps to make up for it by replacing the lost or ruined item. If something you said upsets someone, you can try making amends by contextualizing what you said, explaining why you said it, and if necessary, taking it back.

A study found that how much airport employees tried to fix issues like lost baggage or flight cancellations was almost more important to customers than the problem getting fixed in the end. After immediately apologizing, the employees who vigorously explored potential solutions rather than continuing to apologize were perceived as more effective.

“Attempting to find a solution is an indicator of actual remorse, whereas simply apologizing could be sincere or not,” says Eaton. “When there is a way to make things better, the research generally considers it to be an essential part of an effective apology.”

To make the biggest difference, your apology should also have good timing—and that’s probably not right away. A 2005 study found that apologies were more effective when they came later in a discussion rather than earlier, so you have time for some active listening.

“Asking questions to make sure you understand, and paraphrasing back to them what they’ve said, is a really good way to ensure they feel heard and understood,” says Cindy Frantz, a psychologist and author of the study.

Timing is also crucial when it comes to apologies in professional and romantic settings. A 2020 study showed that in the service industry, an apology that follows a listen-and-then-apologize pattern, regularly outperforms a preemptive “I’m sorry”, just for the sake of it. When it comes to couple quarrels, timing is even more delicate, and the offender only has a specific time frame to apologize—it should happen later during the discussion, but before the 10-minute mark. Researchers found that after that time, discussions tended to get too complicated and escalated too quickly.

Apologize as much as you can—just don’t overdo it

Sometimes, apologizing for things that are out of your control, like the weather, can come in handy for garnering trust. In a 2014 study, researchers asked strangers at a train station to borrow their cell phones. People were more likely to oblige after an apology for the rainy weather.

“Even apologizing for things that aren’t your fault serves as an important expression of empathy. We call these superfluous apologies,” says Alison Wood Brooks, a business administration professor at Harvard University and lead author of the study.

But as with most things, more is not always better, and if you apologize too much, it can backfire. Wood Brooks is currently conducting research on how each apology can serve as a poignant reminder of a transgression or negative experience, dredging it up again rather than serving as a salve to heal it.

“The optimal number of apologies may hinge on the magnitude of one’s transgression,” Wood Brooks says. “Minor offenses might benefit from one apology, while large violations may benefit from two. But more than two apologies can become excessive.”

Good apologies can make a real difference in the long term

Indigenous communities have long used apologies in their justice and peacemaking system, making a big difference at a societal level. In dealing with disputes, this approach encourages offenders and the offended to speak from the heart and come to an agreement about the necessary steps for healing after conflict. This is known as restorative justice and is currently being implemented in youth justice systems in Canada and the US.

The process also involves other people in the community who were affected by a crime. They also get the chance to explain to the offender how they were affected so they can better understand the real consequences of their actions. Likewise, those who committed the crime can also talk about the conditions that might have led them to commit the offense, like their upbringing and their living conditions, for example. Restorative justice is more common when dealing with property crime offenses, and it has proven to have good longstanding positive effects for victims and perpetrators alike.

“It’s not necessarily realistic for all kinds of crime, but it can be really promising,” says Eaton.

If anything, it can teach us something about how important learning to truly apologize can be.