Spontaneous Combustion Is Easier Than You Think 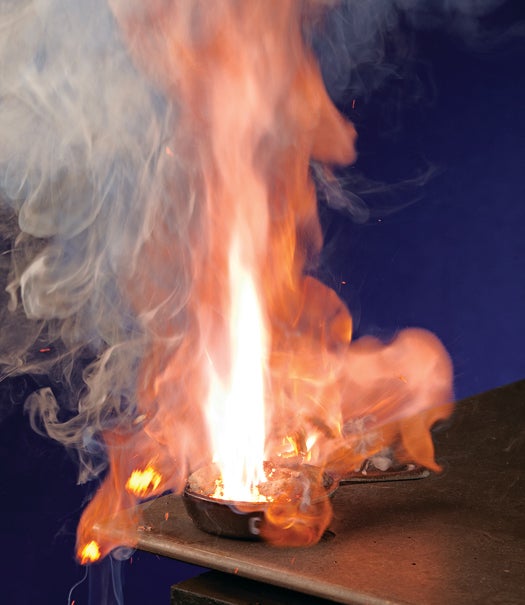 The facts about spontaneous combustion are easily lost. Mostly this is because spontaneous human combustion is a favorite among conspiracy-theorist types. Reports of people suddenly going up in flames tend to omit an essential detail, such as a lit cigarette. Yet as with many phony scientific concepts, the possibility is so intriguing that some people just want to believe.

The same is true of spontaneous non­human combustion. A video recently made the rounds that showed a cotton ball catching fire after having been soaked in several tubes of Super Glue. How cool is that! Of course, I had to try it—again and again—with every kind of Super Glue and cotton ball I could find. It never worked.

There’s no question that Super Glue gets really hot when mixed with cotton. The high surface area of the fibers causes the glue to harden very rapidly, releasing energy in the form of heat. Manufacturers warn about burns caused when Super Glue drips onto clothes, which has happened to me personally. The hot fabric gets stuck to your skin, and any attempt to pull it off just means that it also gets stuck to your fingers.

But there’s a big difference between burning skin and an actual flame. As far as I can tell, the cotton ball in the video does not catch fire; a closer look at the footage suggests that the video was edited just before the blaze starts.

The beautiful thing about science is that for every fraudulent phenomenon, there’s a real one that’s even more extraordinary. Take, for example, a lesser-known form of spontaneous combustion that is genuine and easy to reproduce: spontaneous enema combustion (no, really).

To demonstrate it, I made a depression in a small pile of finely ground potassium permanganate, the chemical sold for recharging iron water filters. Then I squeezed the contents of a glycerin enema dispenser into the depression. Potassium permanganate is a powerful oxidizer and reacts with the carbon-hydrogen bonds in glycerin. A few seconds later, the mixture burst violently into flame. It worked every time—no mystery, no doubt about it.

Warning: Super Glue on clothing can cause burns. Potassium permanganate and glycerin is a serious incendiary.