How do you create a mixture that can easily burst into flames, but only when you want? Just use one of the most unstable mixtures on Earth, plus Elmer's glue 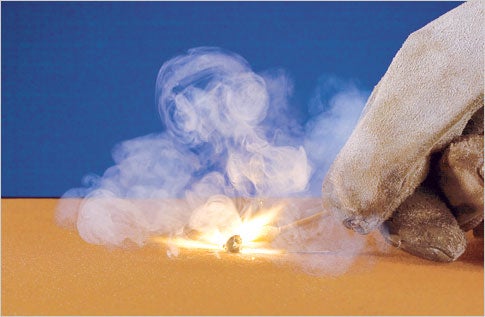 Time: 5 hours
Cost: Roughly $50
**
Matches are edgy. They live on a fine line between harmlessly sitting in a box and blowing up in your face. Among the most dangerous classes of chemicals are those that catch fire simply by shock or friction.

Yet matches are supposed to do exactly that. So modern matches cleverly require two steps before they will light: Chemicals in an igniter (either the tip of a strike-anywhere match or the striking surface of a safety match) must be mixed with fuel in the match head, and the igniter must be raised above a critical temperature by the heat generated through the friction of striking it.

The key, discovered after years of painstaking (and painful) research, is to use red phosphorus as the igniter, and a mixture of potassium chlorate, sulfur and binder as the fuel. Red phosphorus is fairly stable, but microscopic amounts convert into dangerously unstable white phosphorus through friction heat. If the white phosphorus, which exists for only a fraction of a second, is driven into the fuel mixture, it reacts vigorously, setting off the match.

Commercial matches employ several fancy ingredients to make them shelf-stable and easy to light, but when I decided to whip up a batch myself, I just used Elmer’s glue. After several false starts, I created strike-anywhere matches by mixing a stiff paste of potassium chlorate and glue and rolling it onto the ends of eighth-of-an-inch wooden dowels. Then I baked them in an oven until they hardened. For the igniter, I made a similar paste of glue and red phosphorus and applied a small amount to the match tips. After another round in the oven, they were done. And they actually worked!

A warning: The glue is critical-it separates the two active ingredients. If you combined red phosphorus and potassium chlorate directly, you’d quite likely be maimed or blinded in the explosion that would occur while you mixed them, not after. Experienced pyrotechnicians would never use this mixture-other chemicals work better with fewer disfigured hands. When chemists demonstrate the two chemicals’ volatility, they mix them with a feather, on a flat iron surface (never in a container), wearing a full face shield and thick leather gloves. Dangerous, yes, but only this sort of concoction, tamed with glue, has the inherent instability to make a working match.

Red phosphorus is useful in matches, but white phosphorus is plain evil. Luminous in air, one of the best discoveries of the alchemists, it will kill you as soon as look at you. Next month we’ll use it to make a desktop sun.