New Music from an Old iPod 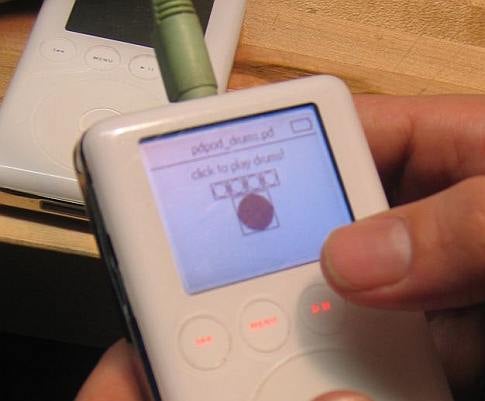 I’m a non-geek, a non-Linux user and a non-male. I had never hacked anything in my life. And I had no plans — or foreseeable need — to do so.

Then, I discovered PureData. When an audio engineer friend mentioned the open-source programming language that uses rectangular boxes to build audio, video and graphics, I was intrigued.

After an hour-long workshop, I got the basic idea and was able to create my first patch (a script), which made my computer emit sounds and let me regulate the frequency of those sounds. Fun stuff. PureData (those in the know call it Pd) was amusing and habit-forming.

I was eager to join — or rather, infiltrate — the ranks of Pd experts, but I wasn’t convinced a writer/radio-producer type like me would have any immediate use for such a tool on my computer. Then I found out the program could run on an iPod. An old, resuscitated, iPod.

Entering the world of open-source software seemed revolutionary. And daunting. For me, it was a chance to experiment with PureData and Linux on a small scale. Or, at least to be in the presence of people who were experimenting — and willing to share their curiosity and know-how.

There are other reasons for my interest, too. I like the idea of reusing outmoded technology, keeping it out of the landfill and turning it into a vehicle for exploration. And, on another note, I haven’t engaged with a musical instrument since junior high school band class, when braces forced me to give up the trumpet for the glockenspiel. So Pd was a non-threatening, if unorthodox, way to slink into musical composition, in an “I don’t want to work, I just want to bang on my drums all day” kind of way.

Thanks to the wizardry of Steiner and his trusty co-conspirator Chris “the Widget” DiMauro, I can now make drum-like noises on my palm-sized third generation iPod:

Here’s how to go about it. 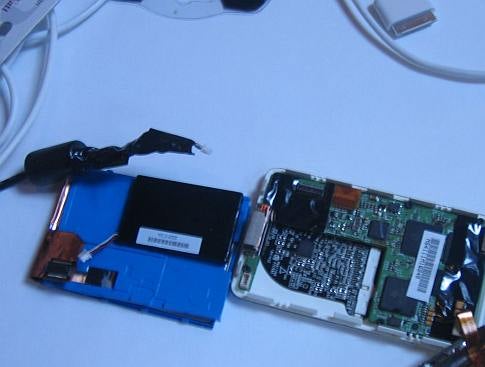 Guts of an iPod

The cord on top with the white tip is DiMauro’s invention. It allows the pod to be charged without a battery. The black rectangle is the battery (note: the connector has the same shape as the end of DiMauro’s cable). The blue rectangle is the sheath that protects the iPod’s hard drive. The copper-colored cable that connects both halves of the pod is sensitive… and important to watch out for.

1. Get an old iPod.
Ideally something circa 2003, generation 3 or 4 preferred. Steiner put out a call on Craig’s List and heard back from the Manhattan’s Lower East Side Recycling Center, which was collecting donations of resuscitation-worthy electronics. I got a 3rd-generation pod to bring to Steiner’s workshop, but it was a 3rd-generation video iPod. Oops. According to Steiner and other hacksperts, newer, svelter models are nearly hackproof. Luckily, several online guides show the lineup of the full pod genealogy. I like this one for its photos of the handsome forebears and their descendants.

2. Pry it open.
This requires some finesse and patience, and ideally, some experience extracting the meat from hard-shell crabs, or urging a bike tire from its rim. But you can’t just jimmy the whole thing open in one go. Each of the long sides of the top of the iPod needs to be pulled apart from the bottom individually. Don’t fear: specially made tools are available. The replacement battery I bought for my gen-3 iPod came with plastic green dissecting tools, but Steiner swears by slender black plastic instruments that he saw in a YouTube video. His hacking kit also includes dental instruments. You never know.

3. Make sure the thing works.
Test the iPod’s hard drive (it’s encased in a blue plastic sheath) by plugging the iPod into a power source. DiMauro spliced a battery hook-up onto power cable. But you can also plug the pod into your computer.

Gen-3 resuscitators, beware: Steiner and DiMauro recently discovered that gen-3 pods (the one with the four buttons above the scroll wheel) need to be powered via a Firewire, not USB, connection. That bit of insight solved the problem that stopped my pod dead in its tracks on Day 1 (and Days 2 through 7) of the attempted hackectomy: The pod seemed to hold a charge, but after hours of being plugged in, the screen displayed only an exclamation point and half-charged battery symbol.

4. Put in some patience.
Huck not thy object of hacking if it doesn’t work at first. For me, the second try was a charm. Of course, Steiner and DiMauro were doing most of the troubleshooting. I brought wonderment, cluelessness and chocolate chip cookies (In the spirit of open source, I’ll share the recipe: a log of Pillsbury pre-made cookie dough).

**5. Download ipodLinux. **
It’s easier on a PC. Instructions are trickier for a Mac, but Steiner’s working on changing that, too. Here’s his cheat sheet.

6. Download PureData for iPod (pdPod)
The handy-dandy download comes with a few demo files that simulate an electronic drum kit, that, yes, you can hold in the palm of your hand. The pdPod application is what lets you make music on your pod while you’re walking around. Steiner modified the Pd patch to change the look of the screen. And he swapped out one of the existing sounds with one of his own. 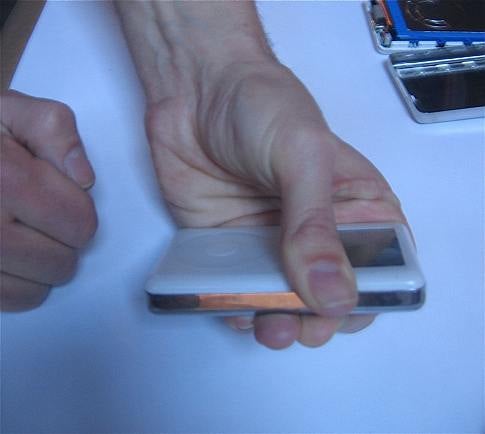 The proper hand position for performing a podectomy 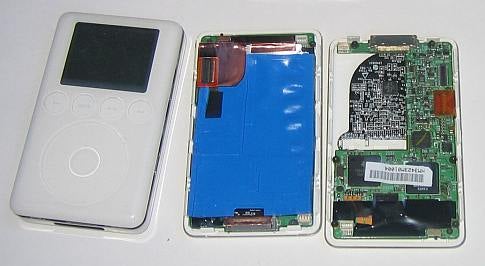 The hacking process proved to be a good opportunity for conversation — and disabusing me of the notion that hackers are insular and non-communicative. Au contraire, mes frères. These guys went out of their way to explain even the most minute details to me. Several times.

We ruminated on how to obtain more great-grand-pods and how to make the hacking process even more appealing for humanoid newcomers. We brainstormed other potential uses for the antiquated mp3 players: Building blocks? Paperweights? Insulation for homes of the future?

And we pounded out a few tunes (sometimes it sent the pod into a tailspin, requiring a restart). That’s what reckless playing will do. In any case, making music with an old pod is possible, right now. And, all joking aside, Steiner has a vision of creating a live orchestra of people armed with Pd-laden iPods (Take that, junior high school band).

DiMauro is set on converting the shell of a 3rd-generation pod into a carrying case for smaller electronic bits and pieces.

And me? Well, all that tech talk primed me for another practical hack of my own: using the iPod’s well-worn protective gel case as a snack holder. Supply list: one Oreo, two Lorna Doone biscuits, and four M&Ms (substitute wasabi peas or edamame, according to taste). 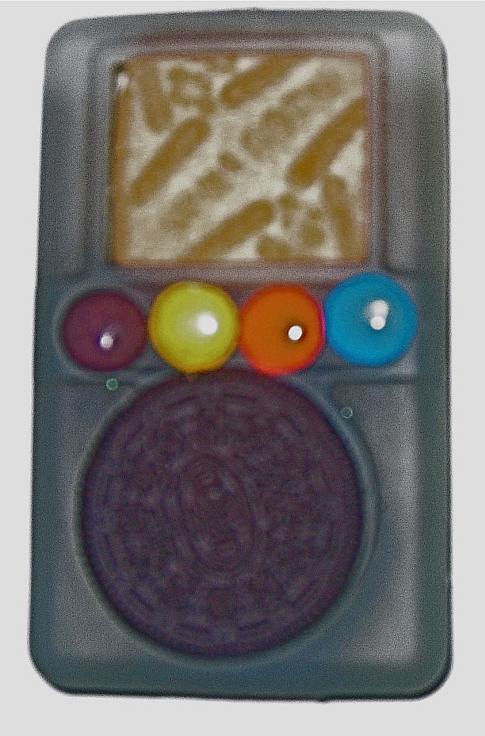