What the Heck is Three-Phase Power (and how can you get some)?

I recently moved my shop, and in addition to the big issues, from forklift rental to sleep deprivation, we also... 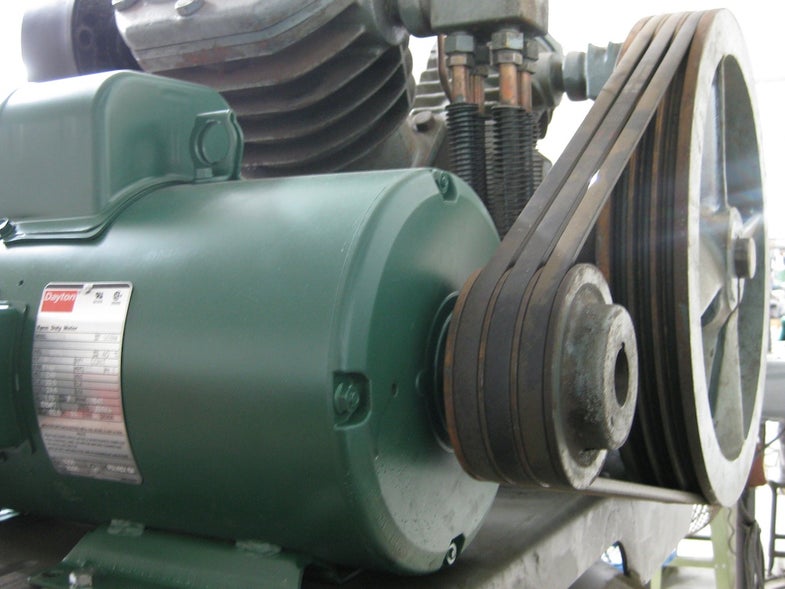 I recently moved my shop, and in addition to the big issues, from forklift rental to sleep deprivation, we also had to deal with things like three-phase power, a variation of power delivery often used for big equipment. The old shop had it and the new shop doesn’t. So what the heck is three-phase power and how can you convert machinery to go from the more common single-phase to three-phase and vice versa? Read on.

For us, the impact was limited because only the air compressor had a three-phase motor. Some of the welding equipment had been running on three-phase, but can easily be re-configured to run on either three-phase or single-phase.

But first, a short explanation of three-phase power.

Alternating current does just as it’s name implies and alternates cyclically, first flowing in one direction in a circuit and then reversing to flow in the other. As it does this, the magnitude of the voltage supplied varies continuously between a positive and negative maximum amplitude. In the US and anywhere else with 60Hz power, this cycle happens 60 times per second. Picture a sine wave: The amplitude of the supplied voltage passes through zero twice per cycle, and at those moments the power supplied is nada. While this doesn’t matter to many electrical appliances, it has significant implications on larger equipment—particularly motors.

To electricity consumers, that consistency in power delivery is the major benefit. The design of three-phase motors, with one set of windings for each phase, is highly efficient and allows three-phase motors to draw significantly less current than the equivalent single-phase motor.

Home hobbyists and small shop owners often face the problem of three-phase equipment with no three-phase service. Fortunately, there are several ways to make that equipment – often large, valuable, and quite useful equipment – come to life.

1. Replace the motor with a single-phase motor: When there are only one or two machines and the motor is in a configuration that you can actually get to, this can be the easiest solution to the problem. The main downside is that the equivalent single-phase motor (equivalent in terms of service factor and horsepower) will draw significantly more current and will be larger in size. Another disadvantage is the fairly high cost of new giant electric motors.

2. Static Phase Converters: A static phase converter is really just a method for starting three-phase motors. A three-phase motor cannot start on single-phase power, but can run on it once started. This comes at the price of a 2/3 reduction in the rated horsepower and a shorter life expectancy for the motor. At startup, a static converter temporarily provides the third leg of three-phase power by discharging starting capacitors. Once the motor is up to speed, the static converter simply passes through the single-phase power supply to which it is connected. It is not entirely clear to me what the appropriate applications are for a static phase converter and every person I’vea asked about it has warned against using one. Logically, a load that would not suffer greatly from drawing current on only two of it’s three windings (i.e. not a motor) or a motor that is loaded well below it’s rated horsepower and does not stop and start frequently would be the only real candidates. Static converters are, however, less expensive than rotary phase converters.

3. Rotary Phase Converter: A rotary converter amounts to a three-phase electric motor with some starting and control circuitry, all of which together acts as a generator producing nearly balanced three-phase electricity. The motor, called an idler motor, runs with no load on the supplied single-phase power. As described above, a three-phase motor can run on single-phase electricity at a reduced power output, but it cannot start on single-phase without additional help. Either some mechanical means such as a pull cord or a single-phase motor or some electric means – a static phase converter – are used to start the idler motor turning. Once it is turning, it is powered on two of it’s three sets of windings by the single-phase power supply and, because an electric motor being spun is a generator, generates the third leg. Voila: three-phase power for the shop. This is an effective way to power multiple pieces of three-phase machinery , given an adequately sized rotary converter. One caveat applies to this type of system, which is that typically more than one load cannot be started at a time. Also, certain loads fall into different classes of “hardness to start”, and require rotary converters oversized by a corresponding factor. For air compressors, considered one of the toughest starting loads, the recommended factor is at least 2. In my case, that meant a 10HP rotary converter, which is not even a little bit cheap.

4. Variable Frequency Drive: Using the same technology as the inverters that generate 110V power from a car’s cigarette lighter, variable frequency drives use inverters to synthesize three-phase power. Inverters create a close approximation of a sine wave by using transistors to switch current flow. Because the inverter is creating a separate AC power source from its input power, it has the ability to output alternating current at an arbitrary frequency as well as with arbitrary phase relationships. As such, a variable frequency drive, or VFD, being used as a phase converter can not only synthesize clean and balanced three-phase power, but can also vary the frequency of the power produced. With a VFD powering three-phase equipment, the speed of the motor can be controlled by varying the frequency while still providing full power. This is a neat trick. In what should be apparent as a common theme for each of these solutions, variable frequency drives are not particularly cheap.

I chose to simply replace the motor on my air compressor with a single-phase motor. I had to re-configure the motor starter somewhat, but it was a fairly simple process. If the shop had more three-phase equipment, I would probably have ended up with a rotary converter (which can be built as well as purchased). If we had the type of horizontal mill that has a three-phase motor and speed control only through pulley selection, I would have looked very seriously at a variable frequency drive to provide nearly infinitely variable speed control for that machine.