How it Works: The Artillery-Grade 600 MPH Pumpkin Cannon 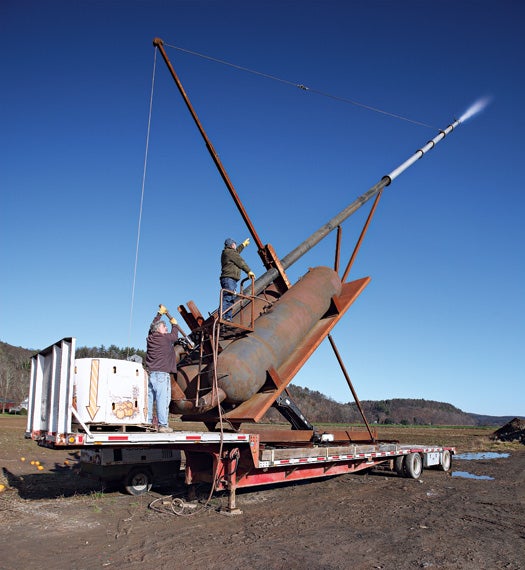 Even from his house six and a half miles away, Gary Arold’s son can clearly hear the artillery-grade boom from his father’s giant air cannon. Along with his friend and co-builder, John Gill, Arold’s favorite pastime is sending pumpkins—and other roughly spherical projectiles, including a bowling ball and a 12-pound frozen turkey—flying nearly 4,000 feet across Gill’s Hurley, New York, farm.

The duo was inspired to build the cacophonous contraption when a mutual friend made a small cannon and asked to shoot it off on Gill’s vegetable farm using an air compressor. Arold and Gill immediately wanted one too but endeavored to match the size and power of the biggest cannons at the annual Punkin Chunkin World Championship in Delaware, the Super Bowl of pumpkin shooting. Their monster features two old 1,000-gallon propane tanks and a 100-foot metal barrel. They pressurize the air in the tanks by connecting a compressor and then open a valve to unleash the 100 pounds per square inch of pressure needed to hurl a pumpkin seven tenths of a mile.

Arold and Gill hope to enter the cannon in this year’s Punkin Chunkin contest. It’s powerful enough to win, but first they may need to tweak the propulsion system before getting the safety certification the contest requires and rolling the eight-ton behemoth to Delaware. They also plan to give it a paint job and add an inscription on the barrel—the Latin translation of their motto, “Brute Force and Ignorance.”—Amanda Schupak 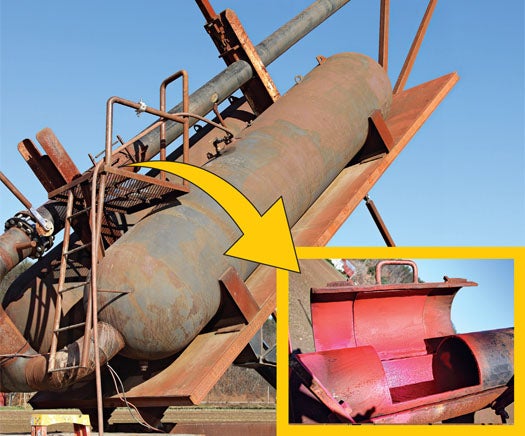 Once More unto the Breach

The builders load ammo into a door in the barrel. One time they shot off a scuba tank, though, which had to be loaded into the mouth.

Time: One year
Cost: $20,000
PUMP AND RELEASE
Gill and Arold welded two 1,000-gallon propane tanks side by side on a trailer-mounted elevated platform, connected by a T-shaped steel pipe fitting that extends into the barrel. A standard construction-sized external air compressor connects the first tank with a rubber hose. It takes about 10 minutes before the needle on the pressure gauge indicates the required 100 pounds per square inch. A good yank on the lever opens a butterfly valve, pummeling the payload with pressurized air and shooting it forward. Arold and Gill estimate that at maximum velocity, just after leaving the barrel, a pumpkin sails at around 600 mph.

FIRE IN THE HOLE
A breach at the base of the barrel swings open for loading ammunition. For practice, Gill and Arold get surplus basketballs from a local sporting-goods store and fill them with corn seed and insulating foam to approximate the weight and density of the pumpkins used at the Delaware competition. Unlike irregularly shaped pumpkins, the balls consistently fly straight, plus they’re available year-round. Friends also often leave bowling-cum-cannon-balls at Gill’s office door. Before shooting anything though, the builders have to make sure that the trailer is perfectly level before raising up the barrel, so there’s no danger of it tipping over.

THE BARREL
The first 40 feet of the 10-inch-diameter barrel is schedule-80 steel, the stuff typically used for steam pipes and oil drilling. Five extensions of heavy-duty aluminum make up the total length, just shy of 100 feet. Bought from steel suppliers and bolted together by Arold and his construction crew, the extensions can be disassembled before transporting the cannon from one place to another. To prevent sagging, the barrel is supported by cable run over a 16-foot mast erected from the platform. As the pumpkin travels toward the barrel’s mouth, it builds velocity, without being slowed down by the excess friction that a longer chute could create. Arold and Gill have achieved distances of 3,700 feet with pumpkins and broken a mile with a bowling ball. Pocked with the craters of landing projectiles, Gill’s fields are now geological records of the shots fired. Except for the first bowling ball—that was never found.