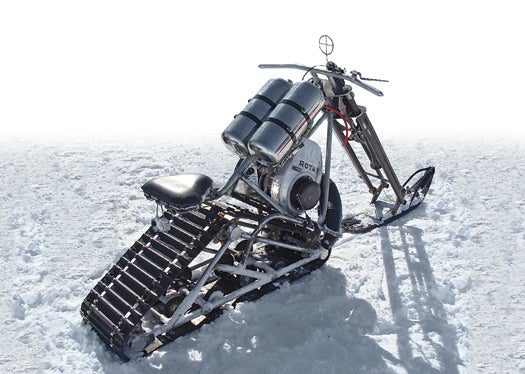 In the desolate environment of Antarctica, when mechanics Bob Sawicki and Toby Weisser weren’t at their jobs maintaining a fleet of snowmobiles at the U.S. logistics hub there, they passed the time by building a motorcycle-like snow vehicle out of junked parts and trash. As government employees, they were forbidden to use any new equipment on their side project. Instead, they got the engine and track from a totaled 1981 Ski-Doo Elan and, with the exception of nuts, bolts and fuel hoses, everything else from savvy dumpster diving.

Using pipes salvaged from a recycling bin, Sawicki and Weisser fabricated a frame, with a bent crowbar as the brake and a tent pin as the accelerator. The emergency brake is an old ice ax, and a couple of ice screws welded to the frame serve as foot pegs. It has two chrome tanks that used to be fire extinguishers; now one contains fuel, and the other feeds compressed air to a salvaged air horn. The aged engine performs modestly well, doing 30 to 35 mph on the snow—but that’s pretty good for 99.9 percent post-consumer content.

Builder Lars Erik-Lindberg’s hot rod consists of a fiberglass Model T replica mounted on the frame of a Volvo Duett station wagon, powered by a Chevy V8 engine. Underneath, Erik-Lindberg installed the tracks and suspension from an Arctic Cat snowmobile, allowing the vehicle to cruise across the frozen lakes of Sweden at 100 mph.