Ice is supposed to float, but with a little heavy water, you can make cubes that sink 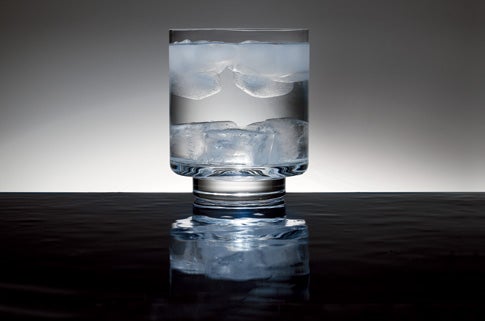 Want a surefire bet for your next cocktail party? First, tell your guests
that aquatic life-at least in temperate
climates-depends largely on the fact
that ice floats. If it sank, lakes would freeze solid instead of forming an
insulating layer of ice on top, killing all the fish. Now bet that you can
magically make an ice cube sink. Grab one from a glass of special cubes
you’ve strategically placed nearby, and drop it into a cup of ordinary
water. Collect your guests’ money.

The key to the trick is heavy ice. Many terms shouldn’t be taken literally-a
red quark isn’t red, a peanut is neither a pea nor a nut-but heavy water is
exactly what it sounds like: water that weighs more than normal. This is
possible because elements occur in several different forms, or isotopes,
made up of atoms with the same number of protons and electrons (which
determine their chemical properties) but a variable number of neutrons
(which contribute weight but not much else).

Hydrogen atoms always have one proton and one electron, but only one in
every 6,400 has a neutron that nearly doubles the atoms mass. Using a
complex process called H2S, its possible to isolate this heavy hydrogen,
also known as deuterium (D), creating water thats about 10 percent heavier
than normal.

Chemically, D2O-as it’s written-is real water. Algae can grow and thrive in
pure heavy water. Specially raised mice have contained as much as 25 percent
heavy hydrogen; beyond that level, subtle biochemical reactions make the
heavy mice sick. (Researchers used mice because they are small. Raising a
heavy cow would be expensive.)

Heavy water’s primary use is in nuclear reactors, but it is not itself
radioactive. It’s safe to handle (although drinking it is not recommended,
so keep it out of your guests’ glasses) and easy to buy from your
neighborhood isotope supplier (try unitednuclear.com). For about $15 a cube,
you can make your own sinking ice and win that bet every time-unless you’re
entertaining nuclear scientists.

Find more on Gray’s experiments at_ periodictabletable.com and at popsci.com/graymatter