Stir Up Some Nylon

As one of the first synthetic materials ever made, nylon changed fashionâ€”and the world. Now you can make thread yourself by pulling it from a glass of chemicals 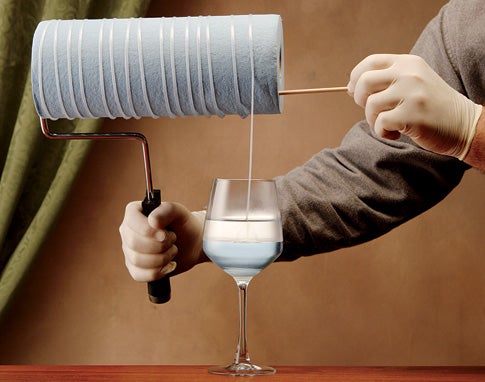 On A Roll: The author pulls a thread of nylon from a glass, where it’s formed at the interface of two chemicals.

In 1938 the E.I. DuPont de Nemours Company, known at the time mainly as a maker of explosives, announced what was arguably the single most important invention in the history of legwear: nylon.

Nylon wasn´t discovered by accident or extracted from a natural source. It was one of the first materials engineered from scratch, based on an understanding of polymer chemistry and a desire to plug what was, apparently, a serious hole in the hosiery department. The company promised that this magical product would finally free the modern woman from the yoke of expensive, run-prone silk stockings. And it worked! There were widespread reports of mobs becoming restless, if not violent, in the minutes before the opening of a store rumored to have some of the new â€nylonsâ€ in stock.

Fortunately, nylon is now abundant, and if you have a chemicals catalogue handy, it´s not that difficult to make yourself. When molecules of hexamethylenediamine and sebacoyl chloride link together in an alternating pattern to create chains thousands of atoms long-which happens spontaneously anytime these chemicals come in contact with each other-you get nylon.

The recipe I used is based on the Tequila Sunrise principle: two solutions with different densities layered in the same glass. The heavier, aqueous (water-based) hexamethylenediamine solution is on the bottom [here dyed with food coloring], and the lighter sebacoyl chloride is on top. A film of nylon appears instantly where the two layers meet. Gently pull the film with tweezers, and new nylon forms in its place, allowing you to produce a continuous thread dozens of yards long from an average-size glass.

Commercial nylon is made with the same chemical bonds through a slightly different reaction, and the resulting product is purified and melted down before being pulled into fibers. My homemade thread, on the other hand, is too thick and brittle for knitting. Oh well, I prefer my hose in French silk anyway.

ACHTUNG! Theodore Gray is trained in lab safety procedures. Don´t try this at home unless you are too. Find more on Gray´s scientific pursuits at periodictabletable.com.