Trap Lightning in a Block

To create beautiful electrical-charge patterns like this, you could use a giant particle accelerator. But shag carpeting will also do just fine. Watch how Lichtenberg figures are made in our amazing video 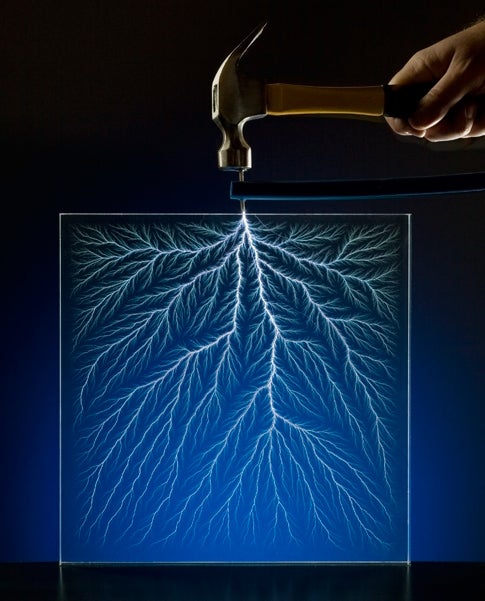 A Lichtenberg figure being created by a tap from a nail. In just a few hundred nanoseconds, electrons trapped in plastic exit suddenly as a bright, branching spark. You can buy the resulting figures at teslamania.com. Mike Walker
SHARE

There are many unusual things to see around Newton Falls, Ohio—the Wal-Mart with hitching posts for Amish buggies, the Army base with helicopters and tanks proudly arranged on hills—but I was here for the most unusual thing of all: the local Dynamitron. I was here to make frozen lightning.

The Kent State Neo Beam facility’s Dynamitron is a four-story-tall, five-million-volt particle accelerator much like a tube TV, only bigger. (Yes, tube TVs are domestic particle accelerators.) Both Dynamitrons and TVs use high voltages and magnets to slam electrons into a target. In a TV, that’s the phosphor screen; in this Dynamitron, it’s usually plastic plumbing components being hardened by the beam. But when I joined the team of retired electrical engineer Bert Hickman and physicists Bill Hathaway and Kim Goins, the product was Lichtenberg figures, lightning bolts permanently recorded in a block of clear acrylic.

With the Dynamitron—rented for the day—adjusted to around three million volts, it blasts electrons about halfway through half-inch-thick pieces of acrylic sheet. The plastic is a very good insulator, so it traps the electrons inside. Coming out of the machine, the blocks don’t look any different, but they hold a hornet’s nest of electrons desperate to get out. 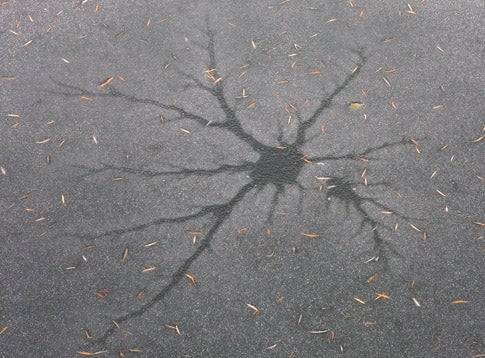 The day of the project, this Lichtenberg figure formed naturally as water drained through ice near the author’s home.

Left alone, the electrons will stay trapped for hours, but a knock with a sharp point opens a path for them to make a quick escape. Electrons gather from all parts of the block, joining up to form larger and larger streams of electric current on their way toward the exit point. As the charge leaves, it heats up and damages the plastic along the branching trails it follows, leaving a permanent trace of its path. If you could see inside a thundercloud in the nanoseconds before a bolt of lightning emerged, you would see the same kind of pattern. The bolt doesn’t just pop up fully formed; it has to gather charge from all over the cloud.

You can create similar, if less permanent, Lichtenberg figures using toner powder from a copier or printer and any common source of static electricity [see below]. This is how German scientist Georg Christoph Lichtenberg first did it in the late 18th century (he used powdered sulfur), which at the time represented one of the great discoveries in the history of electricity. Today, the figures are a great way to learn about electrical discharge—and can make a cool souvenir from an afternoon with a very expensive machine. 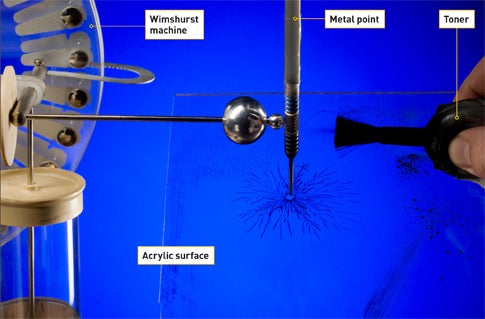 Like what you see? For more Gray Matter, subscribe to our Gray-Matter-only RSS feed here or see the full list of projects. And for Theodore Gray’s one-of-a-kind periodic table poster, head to periodictable.com/posters