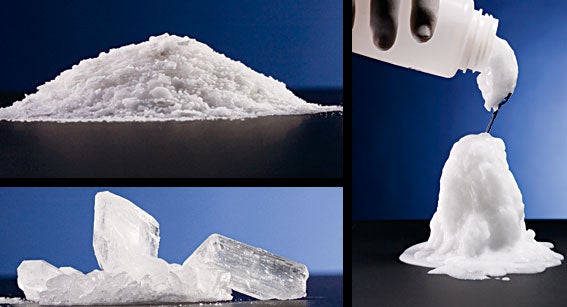 In All Its Forms Clockwise from bottom left: slowly grown crystals; raw sodium acetate; what happens when the rim of your bottle isn’t clean.

In his hilarious book Cat’s Cradle, Kurt Vonnegut describes a crystal substance, ice-nine, that turns any water it touches into more ice-nine. The inventor spends a day playing with it in his kitchen (before it destroys the world), freezing pots of water with crystals. When I read that passage, I knew exactly what he was talking about, because I’ve done it myself.

OK, I don’t really have any ice-nine. But a common ingredient in hand warmers, sodium acetate, simulates the stuff remarkably well, minus the end-of-the-world-as-we-know-it bit. It can turn a bowl of liquid to a solid in seconds, triggered by the smallest crystal.

The excess sodium acetate should precipitate out as the water cools, turning back into solid crystals. But it won’t do so without a trigger. In most hand warmers, that comes from a small piece of metal inside, but even a mote of dust could set it off. Once the process starts, it doesn’t stop until it’s all solid. The substance is not really freezing-in fact, the rapid precipitation releases heat, hence the hand-warming.

Vonnegut must never have actually played with sodium acetate, or I’m sure he would have written in a sculpture-making scene, by far the most fun you could have with ice-nine if it were real. That is, unless a crystal flake on the lip of the bottle turns it solid before you can pour any-then it just messes up your photo shoot.

1. Buy sodium acetate from unitednuclear.com for $24 a pound.
2. Pour the dry flakes into a pot of near-boiling water until no more will dissolve.3. Let the water cool to room temperature, and touch it with a flake of the sodium acetate to turn it to nearly solid. To reuse, just reheat it until it’s liquid again and let it cool.

**
Achtung!** Do not drink a sodium acetate solution. Always wear protective gear, and take all appropriate safety precautions. Find more on Gray’s scientific pursuits at periodictabletable.com and at popsci.com/graymatter.