Before lava lamps and laser light, all you needed for romance was some radioactivity 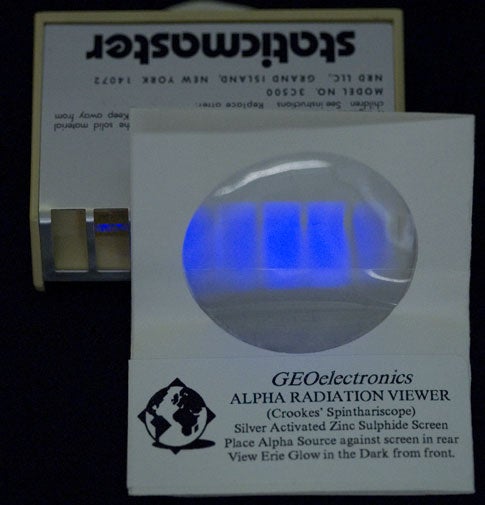 You can pick up a spinthariscope for $30 from unitednuclear.com. Or make your own with a zinc sulfide screen ($10 on eBay) and commonly available radioactive items.

In 1903 there was nothing to watch on TV because there was no TV, and meeting girls was no easier than it is today. But one device solved both problems . . . sort of.

The Crookes spinthariscope, invented that year, is a small tube with a lens at one end and a zinc sulfide screen at the other. Just above the screen is a tiny speck of radium mounted on a needle. If you look into one, you’ll witness a seething, swirling light show of individual atoms going out in a blaze of glory (more entertaining than most things on TV today, I’d say). Each decaying radium atom sends out a high-energy alpha particle, which slams into zinc sulfide crystals. This triggers a process that eventually releases photons, creating visible flashes.

These atoms are so small, it would take the energy from four trillion of them to raise the temperature of a teaspoon of water by one degree. The fact that you can see the flash from a single atom decaying is nothing short of amazing. Your eyes must be totally dark-adapted, which means sitting in a pitch-black room for at least 10 minutes. If you were a dashing young man of science in 1903 and you brought one of these scopes to a dinner party, you would have been rude not to invite the ladies to sit next to you in a dark room. This might account for some of the early popularity of the device.

In 1947 you could get a Lone Ranger Atomic Bomb spinthariscope ring for 15 cents and a Kix cereal box top; the same toy recently cost me $200 on eBay. But modern spinthariscopes (made with safe radioactive ores) are available, and they really do work-provided, of course, that you sit in a dark room for 10 minutes first. Do with that opportunity what you will.

A THOUSAND POINTS OF LIGHT: A Mathematica-generated computer simulation of what you see inside a spinthariscope. The phenomenon is so faint, it´s nearly impossible to photograph.