Sure, Just Give A Robot A Sword 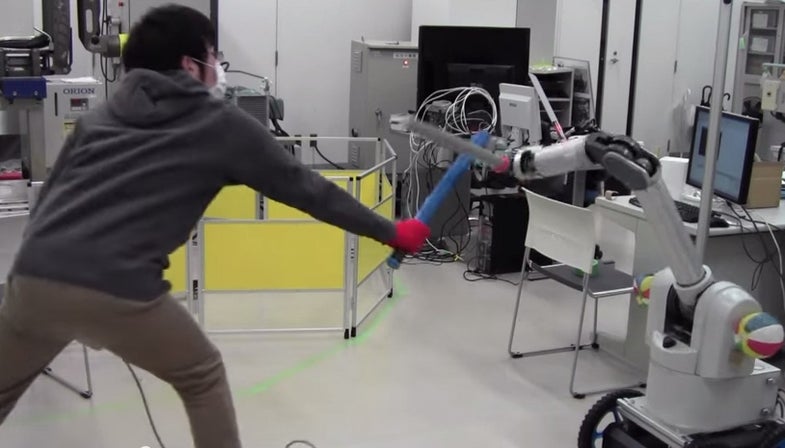 In this eight-second clip, a sword-fighting robot successfully parries a human attacker. Both are wielding foam swords, which is a good safety practice and makes them look less like lab researchers and more like anachronistic cyberpunk live action role players. Watch the fight:

The robot was built by Japan’s Namiki Laboratory, and the results published in a paper titled “Development of a Sword-Fighting Robot Controlled by High-Speed Vision.” Here is what the lab says about the paper:

Robots are good, but getting sliced in half by a robot is decidedly a bad thing. Seriously, there are multiple TV shows about why arming robots is a terrible idea. Of course, a lot of the fear about arming robots is really fear about other things: what if the robots enable us to fight bad wars, what if the robots turn their arms against their human masters, something that humans with weapons have never done in the history of ever? So perhaps instead of fearing robots with arms, we should just be happy they’re learning the outdated weapons first, like swords.

Human have armed robots with blades before, possibly just because humans are very bad at assessing personal safety. Or perhaps there’s a bit of overpowered mischief to it, like watching a cat play with a mouse. Sure, we’ll give robots foam swords and kitchen knives, but meanwhile, we are building missiles that can knock out computer systems from the sky. Wave a sword at that all you like, future robot overlords.