Experts weigh in on the psychological reverberations of violence. 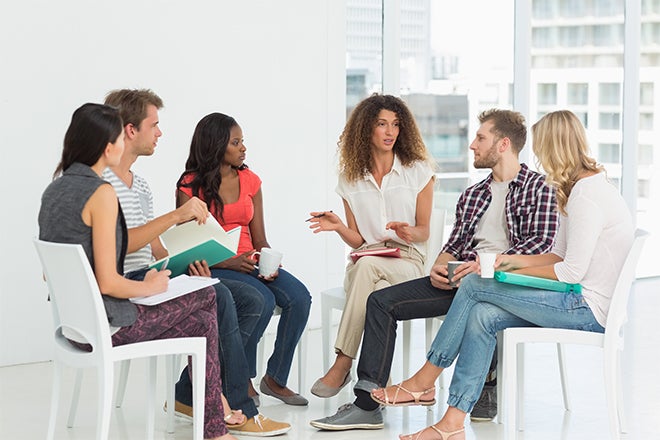 At least 58 people were killed and more than 500 were injured in a mass shooting in Las Vegas on Sunday night. The Mandalay Bay Resort, where the tragedy took place, is currently calling for trauma counselors to help the shooting victims in the short term. But survivors and the families of those killed will spend years dealing with the aftermath of this event, and the trauma does not stop with those who were present and their loved ones.

Vicarious trauma, or compassion fatigue, affects people who work with catastrophe victims. Even watching the news on television can cause symptoms of stress—research suggests that following such events on social media can lead to many of the signs of post-traumatic stress disorder. The event itself only happens once, but media coverage can make it feel like the catastrophe is happening over and over again.

Symptoms of vicarious trauma may include an inability to discuss personal feelings, general irritability, and a lack of enthusiasm for once enjoyable situations, according to the American Counseling Association. Caregivers and news viewers can help themselves by paying attention to their own needs—by turning off their phone or television, eating regularly, exercising, remembering to sleep, and engaging in creative expression and humor. The bottom line: don’t feel bad for feeling bad. Take care of yourself.

James Caringi, professor and chair of the University of Montana School of Social Work and Charles Figley, chair in disaster mental health at Tulane University, weigh in on the next steps that anyone feeling traumatized by an event—whatever their proximity to it—can take.

Why can’t I stop thinking about these tragedies that I see in the news?

Caringi: You don’t have to be in Vegas to be impacted by this. When 9/11 happened, I was living and working in Alaska. Those native communities of 150 people or less were impacted, even though they were so removed. The impact can be anywhere.

Acts of terror can devastate our sense of safety. Even though these random acts of terror are, thankfully, rare, they are so horrific it can feel like they happen all the time. It is quite possible that my children will be impacted by it because they see it on the news, they see it online. And now you really can’t turn on the television or turn on the radio without hearing about it. That increases the potential for both primary and secondary trauma.

What should you do if a close friend or family member was at the event and wants to talk to you about it?

Caringi: As non-professionals, we can play a role and provide support. However, I think it’s important to realize the difference between friendly or familial support and professional help. I’m a licensed social worker, but if I had loved ones who were involved, I would be talking to them as a family member or a friend.

Figley: If someone keeps talking about a shocking experience, they are probably trying to answer five questions about it. The first question is ‘What happened? What happened to me and what happened to us?’ The second is ‘Why in the world did this happen?’ We all feel better knowing ‘Oh, it’s that.’ And then everyone can start relaxing. Then, ‘Why did I act the way I did?’ Why did I choke up when I saw this father with blurry eyes who stayed up all night looking for his kid? Why did I get mad or want to turn off the television? And here’s the fundamental thing—it’s just been hours since this thing has happened. What if this happens again? If I go into a concert, if I go into a movie theater, will I survive and will I be okay? It’s those fundamental questions that probably result in the constant questioning. It’s coping with the utter and horrific craziness that we’re facing.

The very positive thing is that when we have those life experience and answer these questions, we have become a survivor and not a victim. If professional soldiers and marines go through this and then they go back into the field, they have to figure out how not to be anxious. If we’re able to learn the lessons, we are much more prepared for the future.

What should you do if a friend was killed and you want to support their family?

Caringi: If you’re the person who is providing that support, you can be impacted in a secondary way. I would be looking for local grief resource centers or community mental health centers. It’s important to not just get treatment, but to get treatment that will actually help. SAMHSA also has a registry of of evidence-based practices. One particular method that I would refer you is psychological first aid, which is an approach that can be administered by non-professionals.

Figley: [Those who’ve lost family members] have to deal with a lot of the details without actually being there. If we love and adore these people and want to take away their misery as soon as possible, we are screwed. We want to help as quickly as we can, and sometimes we can’t. It’s tricky—is there something that we can say that won’t do any harm, at least? I’m not really sure. Just stop and think before you say anything about how you would feel in the other person’s situation. Probably when you were receiving it, you would be very magnanimous. Because whatever we give is usually heartfelt. That’s what you’re going for, as little damage as possible.

What should you do if you were actually at the event?

Figley: I would emphasize to you is to be gentle with yourself, give yourself time. Recognize that very few people go through what you have gone through. You are doing the best you can dealing with an abnormal situation. Sleep as well as you can, follow all your normal routines as much as you can. When people ask you how you can help, just tell them. If you can’t answer, either you don’t know or you don’t want to talk about it, just say so. The real joy of survival is when other people survive with you. If there’s an opportunity to come back together with the people you were there with, take it. A very common phobia is being around crowds. [So it’s a big step to] not only do it again, but be with the people you were traumatized with. They often have great insight as fellow survivors.

Caringi: If you’re actually at the event, it’s important to realize that you may be susceptible to developing symptoms of PTSD. I usually like to say that if symptoms—hypervigilance, hyperarousal, numbing out, anxiety—last more than a couple week, it’s a sign that things are pretty serious. Good places to seek help are primary care physicians, local mental health centers, counselors, even going to church or wherever you go for spirituality. You may just need to talk about the event, or you may need medical attention.