See Hurricane Matthew Through The Eyes Of People Experiencing It 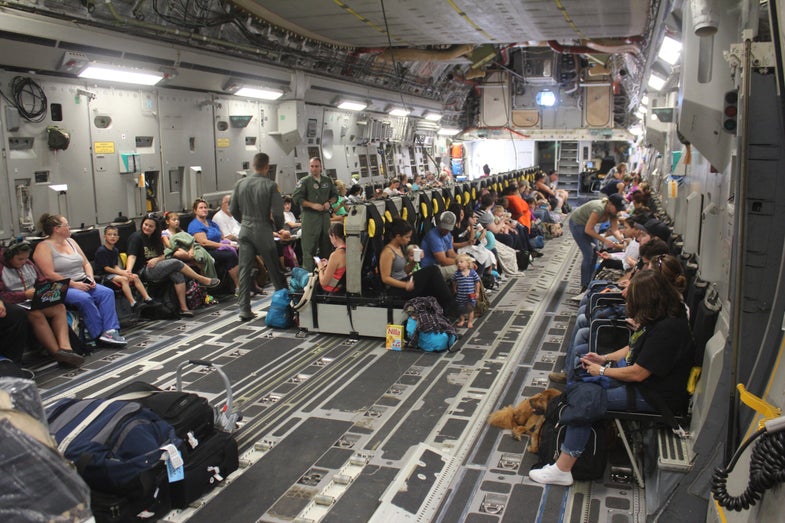 161002-A-RC774-085 NAVAL STATION GUANTANAMO BAY, Cuba (Oct. 2, 2016) Families settle into their seats aboard a Boeing C-17A Globemaster III aircraft for evacuation from Naval Station Guantanamo Bay (NSGB) ahead of Hurricane Matthew. Approximately 700 spouses and children were evacuated to Naval Air Station Pensacola, Fla. NSGB tenant commands continue to make preparations for Matthew. Hurricane Condition of Readiness 2 (COR II) was set base-wide in preparation for destructive winds within 24 hours. Base residents were reminded on the importance of being prepared with essential supplies and were advised to remain within their residence until the "all clear" was passed. (U.S. Army photo by Capt. Frederick H. Agee/Released). U.S. Army Capt. Frederick H. Agee
SHARE

Hurricane Matthew, one of the most powerful storms in recent years, is expected to hit the Bahamas early Thursday morning and move on to Florida by Friday. People are already preparing for its landfall in the United States, while those in the wake of the storm deal with the aftermath.

Planes designed to fly into dangerous weather got some incredible aerial shots of the developing hurricane.

And of the eye of the storm as it headed towards Cuba.

As everyone rushes to prepare, basics like bread and water are disappearing from store shelves.

People hoping to get gas face massive lines as everyone tries to fill up their cars and backup generators.

Other stations are already empty.

People on the coasts of Haiti and Cuba were in a similar situation earlier in the week. Flooding started well before the hurricane landed.

A wall of rain, clouds, and wind hit Haiti and Cuba on Tuesday.

In Guantanamo Bay, the U.S. Navy set up emergency response stations in preparation for the storm.

Expect much more from the Bahamas and Florida as Matthew develops over the next few days.