Researchers still have more to learn from the 150-year-old documents. 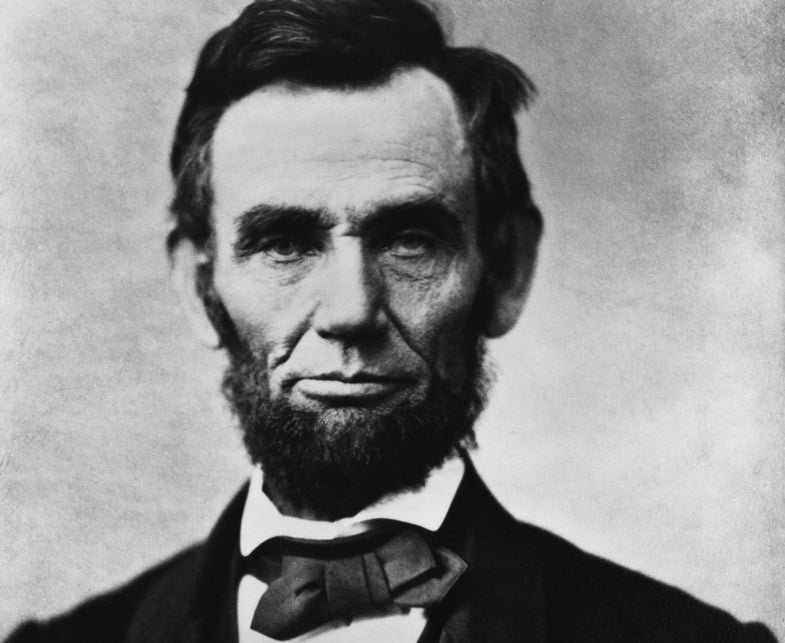 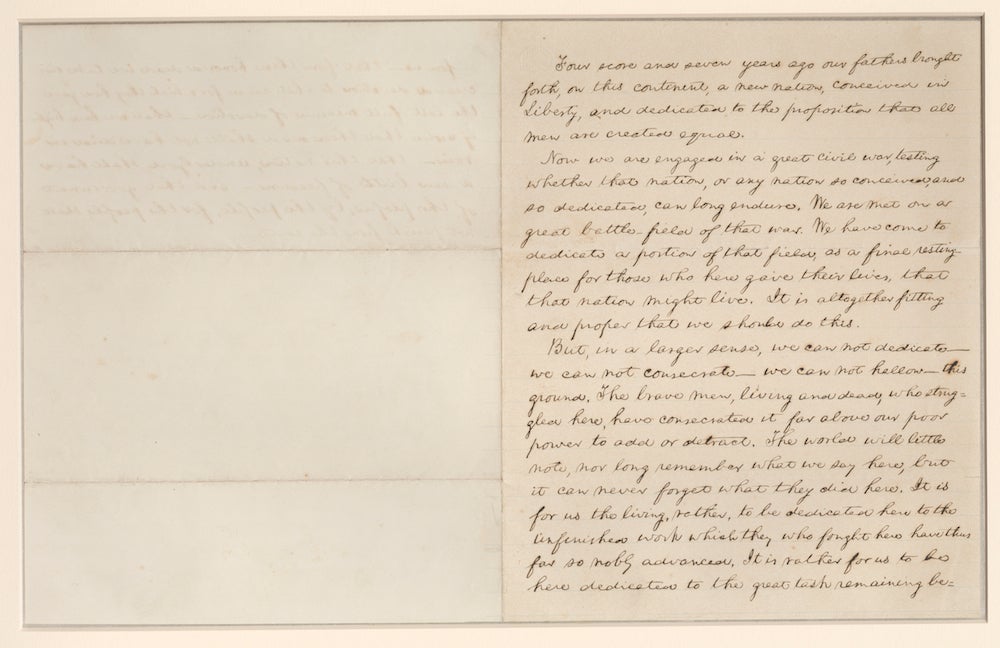 On November 19, 1863, Abraham Lincoln uttered the 10 sentences that would come to be known as the Gettysburg Address. His two-minute speech was part of the Gettysburg Cemetery’s lengthy dedication ceremony, which included a two-hour oration, prayers, and performances. Though Lincoln suggests that “the world will take little note, nor long remember what we say here,” 150 years later the speech is not only remembered, but considered one of the greatest in American history.

Lincoln penned five known copies of his Gettysburg speech. In fact, it’s likely that the copy accepted by historians as the standard (and final written in Lincoln’s hand) differs from what he delivered at the dedication. Researchers still study the variations in these documents’ histories, content, and physical properties. But what’s the best way to preserve these frail papers? Cultural conservators at the Library of Congress, the Abraham Lincoln Presidential Library and Museum (ALPLM), Cornell University and the White House, where the documents are housed, investigate the risks the documents face. Using an interdisciplinary approach, they determine and employ the best preservation procedures to stabilize the documents for future study and display.

All of the versions are on machine-produced rag paper, made from a combination of linen and cotton fibers. They’re all written in iron gall ink, one of the most ubiquitous inks of the time, except for the first version, which is in both iron gall ink and pencil. To keep the ink from absorbing into the paper and thus bleeding, most of documents are coated in a thin layer of gelatin. The first known document was written prior to the address, while the second was written either shortly before or (more likely) shortly after the address, Michelle Krowl, Civil War and Reconstruction specialist at the Library of Congress’ Manuscript Division, tells Popular Science. The last three versions were written by Lincoln in 1864 as charitable donations.

Light and pollutant exposure, temperature and humidity fluctuations, mishandling, manmade and natural disaster, and inherent material flaws are the leading causes of deterioration in most artifacts, says Debra Norris, chair of the art conservation department at the University of Delaware. Exposure to light, temperature and humidity accelerates the natural breakdown of the cellulose in paper fibers.

A previous owner covered it with cellophane to protect the document. The damage was irreversible.

Acid in papers and inks degrade the cellulose fibers of paper, as do acidic pollutants, such as nitrates and sulfates (the same chemicals responsible for acid rain). According to Michele Hamill, paper and photography conservator at Cornell University, the Gettysburg documents’ naturally neutral and high-quality rag paper and well formulated, low-acid iron gall ink is part of the reason the manuscripts are in such good shape today. In addition, the gelatin coating provides a barrier between the acidic ink and the rag fibers.

Poor handling of the documents also caused damage to the addresses. The most severe example of mishandling is seen on the first page of Cornell’s manuscript. One of its previous owners covered it with cellophane to protect the document. However, some early versions of the plastic had a layer of nitrocellulose, a water repellant and low-grade explosive that Hamill suspects caused the damage. Thought it was only exposed to the cellophane for 15 years, the discoloration and damage was irreversible. Additionally, at least one copy has a fingerprint on it. The residue left by a fingerprint isn’t immediately visible, but the oils attract pollutants which speeds deterioration. 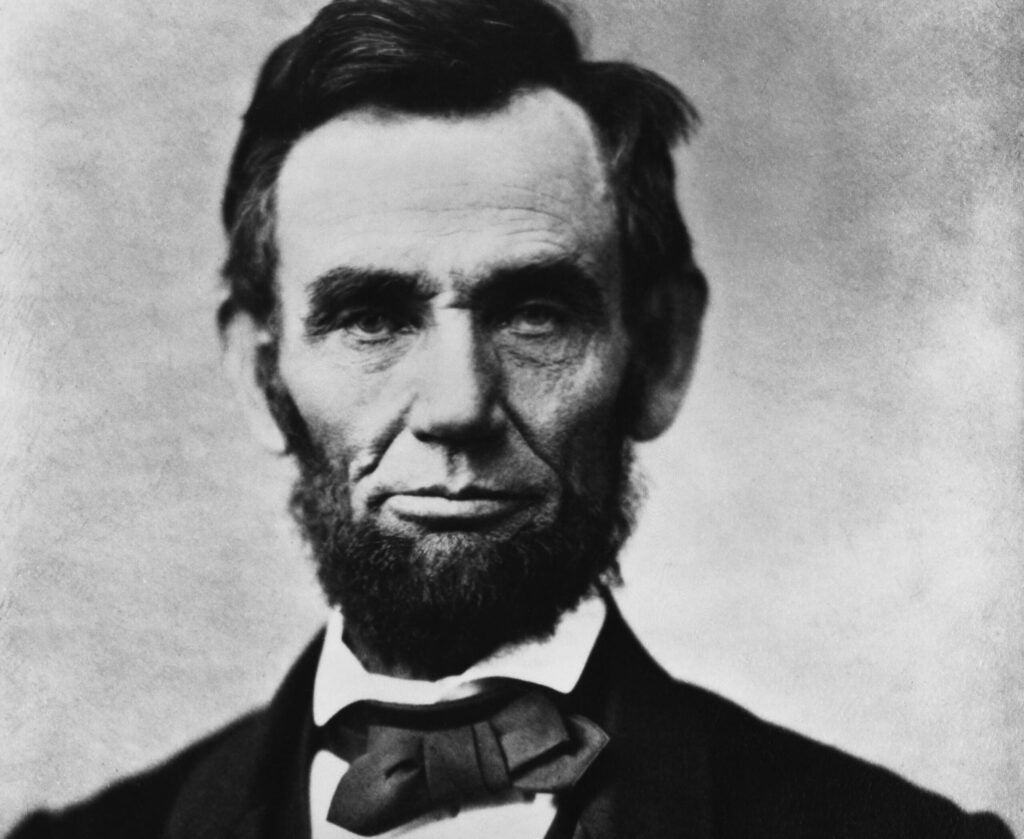 Conservators receive rigorous formal training that is often compared to medical school, says Norris. The University of Delaware’s master’s program in art conservation is one of only four such programs in the U.S. Students learn the best storage conditions, how to trace an object’s history, to evaluate its condition, to diagnose problems, and plan a course of treatment, if necessary. Cultural preservationists abide by the American Institute for Conservation of Historic and Artistic Works (AIC) code of ethics. Like the Hippocratic oath of the physicians they’re compared to, a central tenet of the AIC is to do no harm.

They were able to trace an embossment on the address to a stationery store near the capitol.

The most critical preventive measure is to maintain a stable and low temperature and relative humidity, and to eliminate as much light as possible. The Gettysburg manuscripts are kept between 50 degrees and 65 degrees F and between 40% and 48% relative humidity. While not on display, the documents are kept in almost complete darkness. Some versions of the address are kept in cases with no oxygen, which drastically reduces any oxidation caused by light. The papers are secured to acid-free mounts behind light-filtering plexiglass and stored in acid-free containers, to prevent acid transfer and harmful light damage.

When on display, the documents are carefully monitored for changes in condition, and light exposure is minimized with very low exhibition lighting, according to Bonnie Parr of the ALPLM. She measures the museum’s version of the address to see how its dimensions change in various conditions. Additionally, high-quality replicas are on hand to replace the originals, so as not to risk overexposure.

These preventive measures minimize the need for restoration, but in some cases, additional interventions are required to stabilize documents. These interventions should ideally be reversible, in the case better technology becomes available. When they aren’t, it’s important to weigh the possible gains and losses. Because the iron gall ink was causing acid build-up on the ALPLM’s document, conservators decided in 1995 to deacidify the back of the document. Several of the versions have also had minor tears fixed with neutral strips of paper and starch-based paste.

With the quality of digital scanning and immense amount of research on these documents, why should we waste time on the originals? Aside from the historical significance of the text itself, there’s still plenty to be learned from the objects. Hamill describes the history of the documents and their recent discoveries in a series blog posts for Cornell’s library. Using digital imaging and comparing notes with Krowl at the Library of Congress, they were able to trace an embossment on the address to a stationery store near the capitol. Understanding this supply chain could help historians trace the path of paper during the Civil War, at which time it was incredibly rare.

But beyond these research opportunities, Norris says cultural preservation is essential to cultural identity. “It’s about connecting communities. It’s about reconciliation. It’s about building literacy,” she says. “A lot of these really fundamental world challenges can be addressed in some way through the preservation of cultural heritage.”

See one of the original versions of the address through Sunday at the Abraham Lincoln Presidential Library and Museum in Springfield, Ill.; through Saturday at the Cornell University Library in Ithaca, NY; and through January 4 at the Library of Congress in Washington, D.C.